I chose the project inter(e)scapes GLOW by the company SHO in collaboration with ULR Studio which was presented to me by one of my professors, a collaborator on the installation, Gregory T. Spaw. I admire how the project team focused on mimicking a natural element like prairie grass through digital fabrication to start to integrate the technological and natural words. The collaborative project team was comprised of between ten and fifteen people from both studios which worked together in pairings throughout various phases, including pre-planning, design, fabrication, and finally installation.

In order to achieve the desirable response to the implemented system, a custom interactive software and imaging system was developed to react to surrounding kinetic energy and forces such as wind, human touch, and shifting of weight on the ground surrounding the installation. I feel the integration of response to both human and natural forces increases this project’s potential because there is more activity in the system even when individuals are not present.
I think this project begins to hint at further, large scale integration between technology and the natural environment to develop interesting spatial experiences for users. 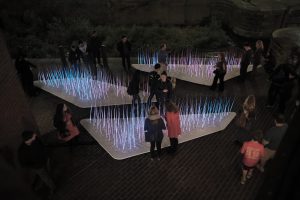