This particular project, called “Airflow”, is future of gaming and entertainment. Developed by Mindride, a company famous for creating unique immersive experiences, “Airflow” is a VR ride that suspends participants in air and simulates the feel of flight by incorporating a virtual reality headset and wind. 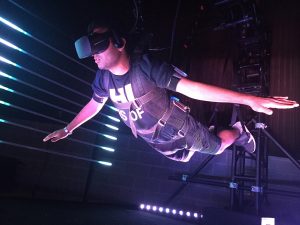 This project caught my attention because it shows the growth of the gaming industry as it gradually moves out of the bounds of controllers and keyboards to something that involves the movement of the entire body. For example, during the gameplay, the user will move his arm backwards for speed up, throw his arms forwards to slow down, and change flight direction by adjusting his arms and head position.

I think this is also a great step forwards for VR, because until now, virtual reality had been seen as a gimmick with lackluster games and limited usability. While I do not see the likes of “Airflow” being available for consumers anytime soon, I believe this is a great concept that the gaming industry should learn from to move forwards.