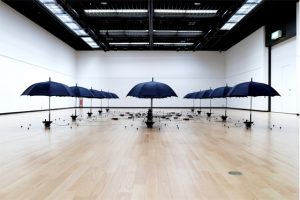 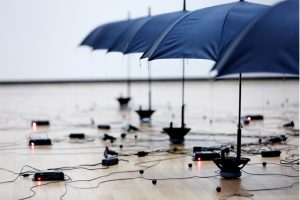 With his 2016 project “re rain”, designer Kouichi Okamoto experimented with non-visual elements to invert the way we perceive the sound of rain. Fifteen speakers were placed at the base of open umbrellas to project the sound of rain hitting the top of an umbrella to the underside of the open umbrellas. In other words, the installation takes sound typically generated from a convex surface and applies it to the concave side of the same surface allowing the generated sound waves to take on the role as the rain. Just as an umbrella deflects rainwater, it redirects the sound waves throughout the room as well as vibrates from the interaction as it would if exposed to real raindrops. I admire the way Okamoto experiments with morphing such a common distinctive sound, giving it a new identity, as well as the way he gives a sort of physical presence to the sound waves. In terms of the possible algorithms behind this installation, Okamoto had to experiment with balancing the magnetic force of the speaker, the weight of the umbrella, and the pitch of the recorded sound to achieve the desired effect. By testing a range of options using these three variables, Okamoto was able to produce a simple yet elegant representation of sound art.