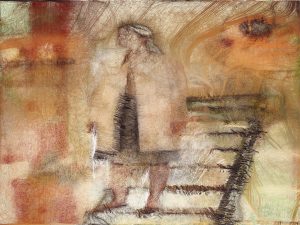 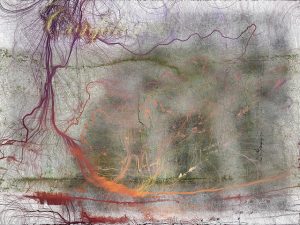 Dreamlines is an interactive artwork created in 2005 by Leonardo Solaas. Unfortunately, it is no longer functional due to changing technologies. However, a user was once able to enter a series of words that describe a dream they would like to dream, and this program would search for these words in google images and use the results to generate what the artist called an “ambiguous painting, in perpetual change, where elements fuse into one another, in a process analogous to memory and free association.”

One thing I admire about this project is how the use of found images adds to the uncanny quality of the moving paintings that makes them so dreamlike. We don’t know when the photos were taken or anything about the subjects or the photographer. We don’t know if they’re dead or alive – and if they’re dead, how they died. Like in dreams, our imagination can turn something innocent (a woman standing on a porch) into a nightmare.

The artist describes the algorithm for the videos on his website. The video is comprised of 1500 autonomous particles in perpetual movement – movement whose velocity is determined by the color value of the pixel it is “stepping” on. The hue, saturation and brightness of the pixel somehow translate to angle and speed values for the particle.

The code combines the unpredictable data presented by the keywords that users enter, an algorithm that randomly selects images from Google, and a logical, predictable function on the color values of the pixels to create perpetual motion and chaos. This method is meant to reflect the processes that take place in our heads – in some ways unpredictable and emotional but actually just a series of electrical impulses, each one determined by physical conditions.