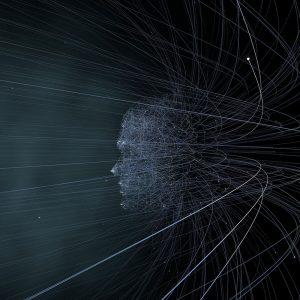 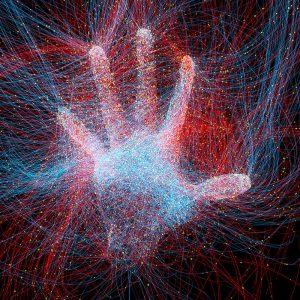 “Particle Man” and “Universe Hand” are computer generated artworks by artist Glenn Marshall. He developed a way to digitally visualize what he had in mind through manipulating the system of Cinema 4D using the Python language. They are experimental digital artworks that creates 3D sculptural forms using mathematical and scientific models of particle collisions, creating the shape of human body parts using thousands of particles of close proximity that are released from a source in 3D space.

What I like about these are how he effectively uses the simple dots and lines in a 3D space to create more complex shapes. The intertwining strands creating a shape that looks organic, which is interesting because the artwork itself is obviously very artificial. Also, I like how his works are presented in an indefinite digital space with illuminated objects, which almost feels really like the universe, just like how he named his second piece.