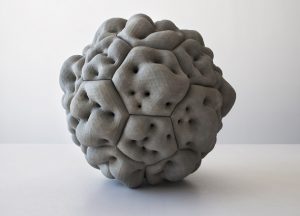 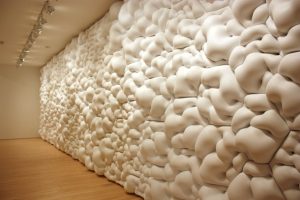 I really enjoyed looking at Andrew Kudless’ P-series. They immediately grabbed my attention as I browsed through the options because they have some seemingly organic qualities to their form, but are definitely generated digitally. I wanted to figure out the process and the mechanism behind it. The artist first started off with exploring some “evocative” texture on his computer, generating a cloud of points that are then turned into constraints that would hold the elasticity in the fabric which he used as the cover material. For his first piece in 2006, called the P-Wall, he used plaster poured into the mould with the fabric expanding under the weight of the plaster. For the next piece in the series, he explores more of the self-organization of material under force, leaving the fabric sag, expand, and wrinkle under pressure. He also has created something named the P-ball, which is a 3D printed concrete prototype. It is super interesting how it is possible to experiment with different materials with digitally created forms.