For this week’s Looking Outwards, that is focused on Sound Art, I choose Samson Young, an artist who is from Hong Kong. The project called Nocturne (2015) is a live performance project where Samson collected found footage of night bombing  (Gaza strip, ISIS, gulf war etc.) from the internet and recreate the sounds of the bombing, explosions, and gunshots using household items live.

The recreation of the sounds of bombing and explosions by just using household items seems to be very interesting in this performance because it is essentially saying that daily objects withhold some sort of power and energy. I am fascinated how he was able to convey such emotions using the medium of sound. 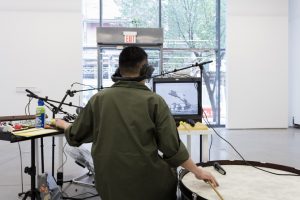