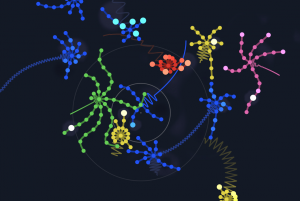 Seaquence is a game on the app store that allows you to spawn creatures that produce music by themselves. The creature’s shape determines how a sound is made. Adding notes or making musical sequences and even changing the waveform of sounds alters how the creature looks. A variety of different creatures can form an ensemble of music with just a tap of a button.

The game was developed by a company called Okaynokay and evolved based on a flash game years ago. According to the creators, the game was made and designed using a custom programmed physics engine which allows the creatures to move on their own based on their notes and give the player a game-like experience.

The game has a dedicated community consisting of both regular individuals and professional musicians. So far, over 300,000 songs have been made on Seaquence.

I really admire the fact that people can now make music with an easy-to-use and fun game. Making music is a long and hard process, but with this game many average and ordinary people can now create their own compositions and get inspired by other creators out there. Making a process that is long and complicated easier and more accessible to the public truly makes this game special in my opinion.

Choo choo View all posts by Sheenu You