The person I chose to reflect on for this week’s Looking Outwards is J.Meejin Yoon 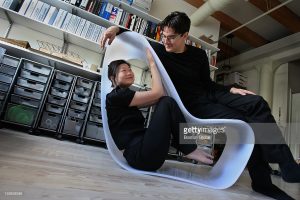 Caption: A picture of J.Meejin and her husband, Eric. Together, they founded an architectural studio, called Höweler + Yoon Architecture LLP, as a husband and wife team. Yoon is also a cofounder of MyStudio.

J.Meejin Yoon is an architect, designer, and educator. She started her education in 1995, at Cornell University studying architecture. Then, she received her Masters of Architecture in Urban Design at Harvard (1997).

Now, she is the head of the Department of Architecture at MIT. Along with the 2015 new Generation Award, she was has been recognized as Architecture League’s Emerging Voices (2012), Rome Prize in Design (2005) and many more. Her works and research focus on intersecting architecture, technology, nature, and public space.

Caption: Eyeo talk by J.Meejin Yoon on interactive play in public space. I admired her presentation because she presented her work with humor, honesty, and thought processes to specific aspects of the project.

I admire that her work consistently incorporated nature. In addition, I like how her work aims to encourage  human interaction. I admire her as a person. She is very humble, yet so accomplished.

My favorite project was “Swing Time.” I liked this project because it was all about encouraging people of all ages to play and engage. She specifically mentioned, that she wanted to experiment to find a way to allow parents and young adults to be brought back to their childhood days with this project. I also really liked her project, Sean Collier Memorial. I like the way she incorporated Incan architecture and how she said at the end: the project was no longer her’s, but the project was now the MIT community’s.