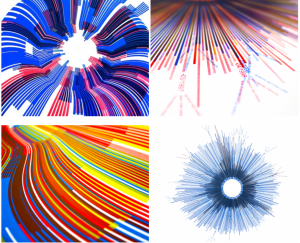 What I admire about Marius and Jer’s “Random Number Multiple” series is that the artist never neglect the beauty of traditional craft while embracing new digital interface through computer generated design. They used computer software to generate complicated geometry and screen-printed the final work. In Haewan’s post, she admired Marius Watz’s “Arc” series for its intentionality given to it random shape. The artists does not just randomly shape the geometry but they precisely calculate the geometry they want.

I agree with her that the randomness is generated by certain rules through a definite computer software to satisfy a statistical test. It seems random but it is actually generated by mathematical processes. I really admire their process of working. They effectively take advantage of computer generated design to visualize complicated statistical data and they also used traditional way to print it. Its nice combination expands more possible ways of executing art expression.