For this Looking Outwards I read Isadora Krsek’s post about Giorgia Lupi and Stephanie Posavec’s eyeo talk, which focused on their year long project Dear Data. She did a great job going into detail about the two artist’s backgrounds and careers, which helped explain why the two would be so attracted to collaborating with each other. They are both extremely successful and knowledgable in the fields of design and data representation, and all that combined experience allowed this project to become something really beautiful. The only thing I would change from Isadora’s post would be to include some pictures of the postcards, which are incredibly beautiful, intricate, and painstaking. It’s also fascinating how the two of them come up with methods of representing the same kinds of data. Sometimes they come up with very similar methods, like in drawing that represents times they loved their SOs versus times they were annoyed by them: 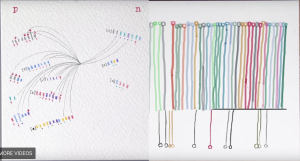 Other times, like in these drawings which track all the times the two artists complained, it’s impossible to tell that the two drawings represent the same kind of data. 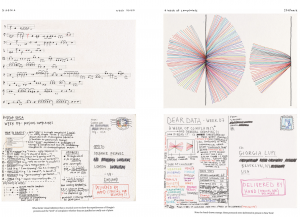 Considering they made 52 postcards, this project is an absolute goldmine of inspiration for anyone interested in data or data art.

I should also mention that I love the double meaning of the title, which both references the medium of postcards and the love the artists have for data itself.