For this looking outwards, I chose to look at Angela Rubin’s post on the Kinematic Petals Dress, which can be found at https://courses.ideate.cmu.edu/15-104/f2017/2017/09/13/aerubin-lookingoutwards-03/. The dress was created by Nervous System and commissioned by The Museum of Fine Arts, Boston. It was presented at the exhibition #techstyle, which ran from March 6 to July 10, 2016. I think that the project is incredibly cool—planning a dress on a model and then 3D printing it sounds like something out of a sci-fi movie.

Angela brings up some very good points in her discussion of the project. I hadn’t thought about the disadvantages of the project until she mentioned them. For example, shell structures can only move in one direction, which prevents the 360 movement other fabric is capable of. Additionally, I wholeheartedly agree with her assessment that the Kinematic Petals dress has an amazing amount of customizability. 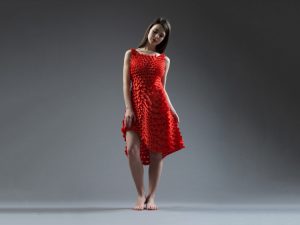 One thing I would add to the discussion is how the aesthetic of the dress was tailored to the medium it was created in. Just by looking at the dress, I get the sense that it is not a typical store-bought dress. The interlocking petals look almost futuristic. I could tell the goal wasn’t to simply make a dress with a computer; it was to test the boundaries of fashion and technology.