Demonstration of the application, using the track ‘Singing under the Rainbow’ by World’s End Girlfriend. 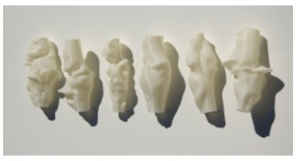 Hollow sound sculptures made from ABS.

This project by Eva Schindling is called Liquid Sound Collision, created in 2009. It uses two opposite words as vibration source that feeds into a fluid simulation. The waves created by the sound files run towards each other, collide and interfere with each others patterns. A frozen moment of this event is then translated into a 3D sculpture. ﻿The quantifying of seemingly unquantifiable concepts and objects is interesting in this project. It also produces aesthetically pleasing forms that have a whole lot of data involved. Schindling received a MSc. in Art and Technology from Chalmers University in Sweden and a degree in Interaction and Media Design from FH Joanneum in Austria. Currently she works as a creative technologist at Daily tous les jours in Montreal. Her work ranges from embodied evolutionary robotics, algorithmic pattern formation to the visualization of otherwise invisible sound waves.