For this project, I knew I wanted to randomize the speed at which the objects crossed the screen. For this to make sense, the object needed to be something that was moving on its own. I thought about a couple of options, including cars, bees, clouds, and hot air balloons. I ultimately decided on fish because I thought I could have fun making the water look like it was moving. You can see my original sketch below. 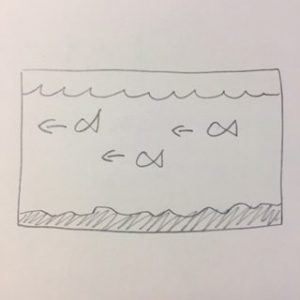 Although I based this project on the provided code, I tried my best to insert my original ideas. I made the water have a low detail to look like it was calm but still moving. I made the sea floor have a high detail so it looked jagged and rocky. I made the fish move at different speeds, ensured that they would be between the surface of the water and the sea floor, and randomized their colors to some degree. (I set the blue value equal to zero so they would never be blue and blend into the water.) It took some trial and error to figure out the right proportions of the fish tails and how to color in the water and ground, but I figured out both of those eventually. I had some trouble with making objects in the past, so although the code is simple I’m proud of it. However, I glanced through other projects and noticed a lot of other people decided to something with fish, so in retrospect I wish I could’ve been more original. Overall, though, still a fun project!