I am interested in creating an animation or a game that is interactive based on Key inputs. The theme and visual that I am interested in is Sci-Fi theme. The exploration of the space and futuristic image is what I want to convey for this project.  I imagine that Ultimate goal would be a interactive game/ animation that explore through the stars and character moving inside the space ship, and may be possible to change the scene to a planet with discovery and move around in different scene(planet).

Main focus of the project I want to convey is the beautiful space inside the space ship and the feeling of adventure. I do not expect myself to be able to code the whole game concept with change of scene, but my focus is on the traveling in space and convey the beauty.

I imagine that travel phase will be close to image below and change of scene probably based on time or travel speed. 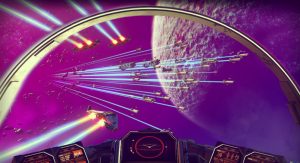 Below is a concept sketch. I want this to start in space as ship travels then tells the user how to accelerate the ship and may be encounter a planet and goes into the planet. If I can figure out the change of scene and animation inside the planet, game will continue to phase where you can see the moving character, if not it will fade out with planet approaching. 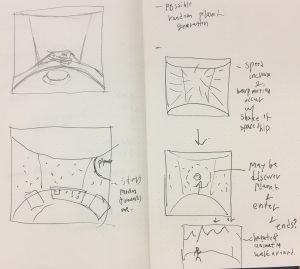