I thought this particular Super Mario game could be relevant to my final project idea. Basically, what I am looking to make is a game where the user controls a main character to move (walk, jump, duck, etc) and achieve goals such as avoiding obstacles, meeting other characters, and collecting items. Me and my partner decided to base the story our game off of the novel “A Little Prince,” and have the character collect (or learn) items (knowledges) as he proceeds. The aspect that I especially thought was helpful in developing our vision for our project in this Super Mario game, was that not only the interaction is relevant, it leads the user to different stages as the character exits the frame, which gets us to help the viewer understand the shift of environments because in the novel, the little prince has to travel from planet to planet in order to meet different characters. I thought this game was interesting to look at because not only it challenges the user through the obstacles in the map, it also opens up an opportunity for the user to think based on whatever I decide to place at the end of each map.

Another piece that I was inspired by was the online game Maplestory, which is basically a game where you are given quests through interactions with static characters and solving them. I was largely inspired not only how the user controls the character, but also its aspect of having conversations with characters embedded in the environment, and how it affects the character that the user is controlling. So, I am going to merge aspects of these two games to make my final project. 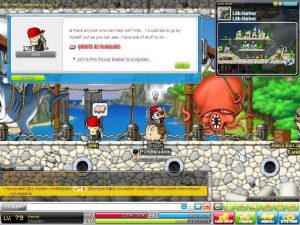