I had two ideas overall:

The first idea is a bit ambitious, but I was thinking that for the final project I would like to create a video game. I’ve been thinking a lot about sexual assault considering all of the events and exposés that have occurred even just within the past two months amongst celebrities and stars – and in thinking about that I also was brought to ponder the way that we teach kids or even explain it to adults. The game I wanted to create would explore how to explain the idea of it and what it is/what it feels like in a subtle and sensitive way while simultaneously not trivializing it – as someone who has experienced it, I know it’s not an easy topic to discuss. I would use P5.js, and a combination of sound and animation to make this an RPG. It’s a very serious and touchy topic, but I also feel that it’s important to think about and playing through the perspective of someone who experiences it, can create a gateway to being able to sympathize if you haven’t experienced it first hand. I think that is the power of games. Obviously this is a tough subject and needs a lot ofthought and consideration, but I am invested in exploring this idea. 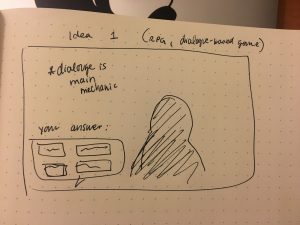 The second idea is somewhat more simple, though also a interactive game – and I wanted it to act as a code-based, explorable/episodic moving painting of the nightmares I experienced through my freshman year. To give some background/context – from the months covering end of fall semester in freshman year to the begging of the spring semester – every night I woke up periodically from a series of terrible nightmares, and it got to the point where towards the end, I tried to avoid going to bed at all – so as to avoid having the nightmares – I also wrote extensively about the dreams I would have since they were always so vivid. At the time I was going through some traumatic things at the time and the 3 months of nightmares that ensued were partially a result of that. Now that some time has passed I think I would like to revisit that time from a different perspective, and try to take the opportunity for creating a game out of this experience to try and explore it as well as take some time to understand this situation from my past a little better. It will be made in p5.js with some images/animations pulled from photoshop or illustrator or wherever I decide to make them, and I think that I will include some ambient sound, but beyond that the piece will rely on text (if there is anything said at all in it). 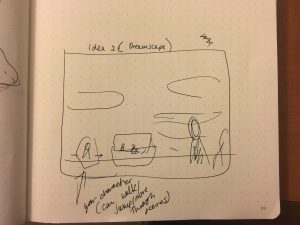 I don’t think I will be collaborating with anyone else for either of these ideas, as these are both such powerful/personal thing – and both of them are of course subject to change. It would be great to get some feedback on each of these ideas and what seems manageable so that I can narrow down the project scope and figure out what to focus on for the final project.