For my project, I wanted to create an interactive game that is minimalistic but fun and somewhat challenging. The user represents an organic shape that follows the mouse and is going to be animated using photos preloaded. It will have a constant waving fluid like motion to look more interesting. There will be geometric shapes falling from the top of the canvas that interact with the user. The two shapes that can win the user points are the circles and squares. To get points from the circles, you (the organic shape) must touch the circle, which causes it to burst. To get points from the squares, the user must press one of four keys which will coordinate with the blob’s color, to allow the blob to eat the square of the same color (i.e. if the user presses “Q” the blob will change to pink, letting it eat the pink squares, but if the blob is pink and it touches a yellow square, the yellow square will just pass through it). Beware of the triangles! Touching the triangle will cause the user to lose a life. There is also a score counter at the bottom right. The higher the user’s score, the faster the shapes will fall from the top of the screen. If the user doesn’t hit a square or a circle, the user does not die, they just lost the opportunity to gain that point. 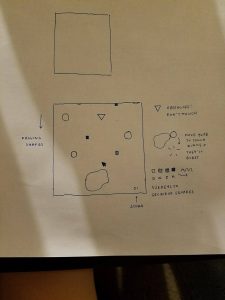 draft made in illustrator of what the game might potentially look like. The blob starts off white until the user changes its color by hitting a key. 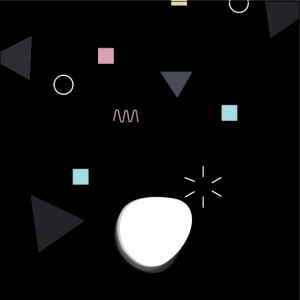