Chris Bjerre worked as a part of the motion design and visual effects team that helped create the promotional teaser for American Horror Story: Cult, the seventh season of the television series. Among the multiple eerie scenes included in the video, the striking face loop is my personal favorite. The hypnotising rotation of the countless identical faces and the lack of color and light create a beautiful yet petrifying scene that successfully catches the viewer’s attention. Additionally, the visual and auditory elements work together to create an extremely unsettling mood throughout the piece.

Scenes from the promotional teaser: 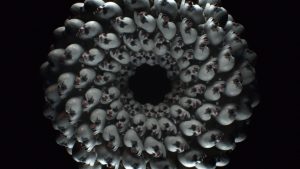 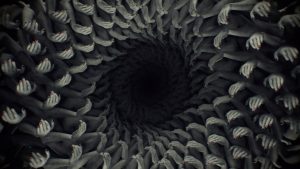 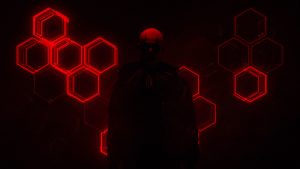 I also love other works by Bjerre, mainly due to their simple yet complex visual structures. Some include Echoes, an exploration of the infinite nature of fractal geometry, and Void, a video work that reflects on the art of creation.

A compilation of his works

like many teens in this generation, one way i discover graphics and trends are through social media. This week I chose to focus on an Instagram account that I’ve been following @motiongraphics_collective, this account collects 3D computer graphic works from other artists and posts them in short video form. This week I chose to check out a couple artists featured on this account.

This is a pretty new account based in Singapore. Their graphics mainly include complex shapes and a series of graphics that leads to forming/deforming it. I admire the geometries created by this artist and the simplicity in its generations.

This artist is a freelance designer. [his portfolio] His work is very organic and have a natural characteristic.

it is very interesting “stalking” artists on social media because a lot of times the works are very raw. It is nice to see everyone’s individual aesthetic on their accounts. 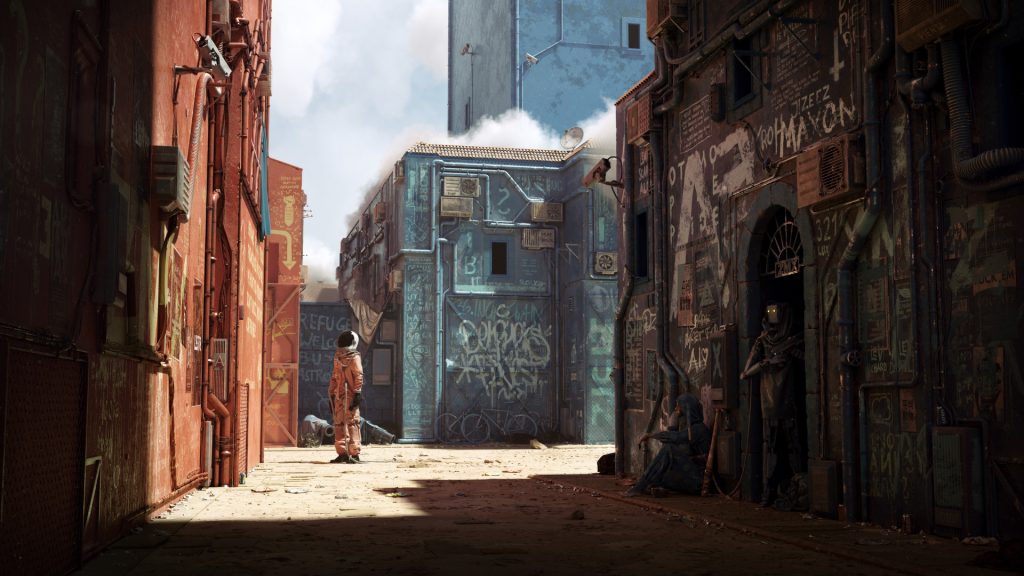 Cornelius Dämmrich is a German freelance CG artist, 6088AD was a painting that he created this year using multiple graphics software. For this painting, he focused a lot on the shading, texture, and lighting for 3D computer graphics. Although the painting doesn’t have a specific story behind, it created an atmosphere combining future and modern humans culture together. The imagination and appearance were very strong and attractive.  Cornelius posted a very detailed breakdown tutorial to explain how he created 6088AD. 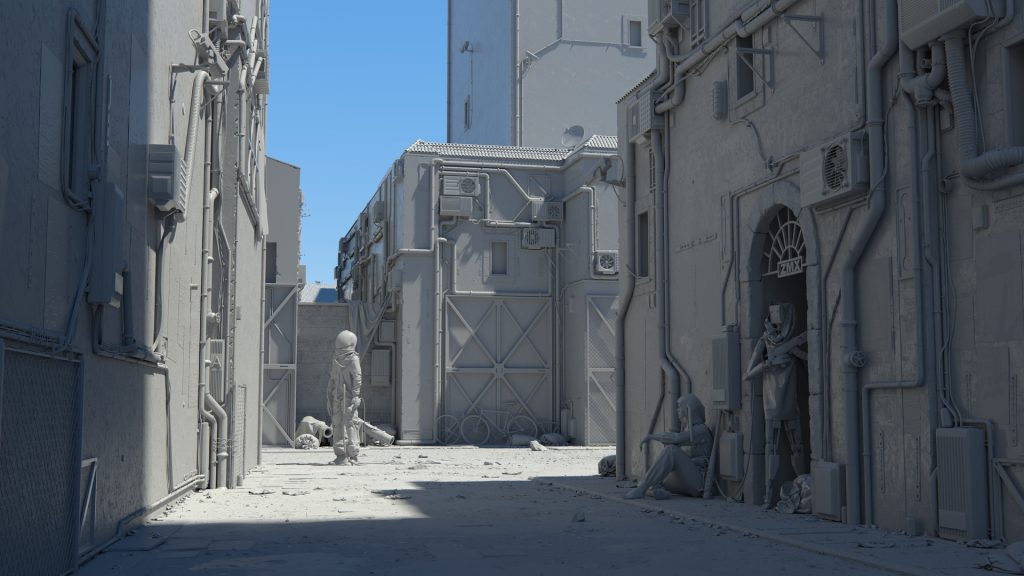 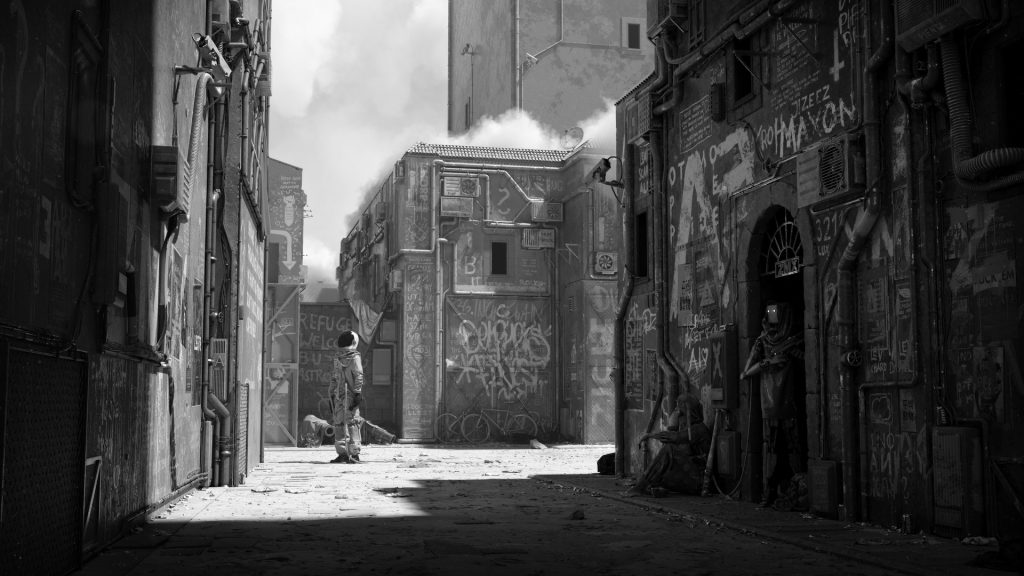 From the video, we can see that he first built up the scene using simple shapes to mark the portions of subjects inside. Also, he used the light inside to make shadows in the scene. Later, he kept carving the models and textures to make it more realistic. The choice of color works really well, the orange on the left side and the greyish colors on the right side helps to create the interesting contrast in the painting. It also strengthens the vivid feeling. 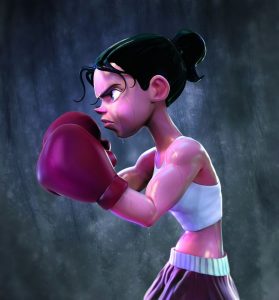 This is “Fight like a girl” by self-taught illustrator and graphic designer Aliel Rocha Prates. I admire two things about this project. First is the creator is self taught and she has produced this amazing art work. I consider that the depiction of any kind of liquid in art work is one of hardest challenge to achieve. I do not exactly know how she has created the art, but I can guess initial was done in sketch form than into the production of form and shape then she post-processed in photoshop for wet skins and illumination. In her website, all of the works seem to remind me of Pixar. Her works are not realistic but very fun to look at the illustration. I never completely understood what computer graphics was and how it could be applied to the fine arts. My whole life I thought that CGI (computer-generated imagery) only applied to generating the characters of famous blockbuster films, such as Avatar. I imagined everything else to be a product of built sets or live models and a green screen. However, after looking into more and more films, from Inception to I found that 3D computer graphics are much more extensive than simply creating the characters. I no longer hold that preconceived notion that computer graphics are solely confined to a specific industry.

The picture shown above is the end setting to Disney’s film, Maleficent. After reading multiple articles on CGI in films and watching videos of films’ production processes, I was in awe as I found that there were so many more uses for computer graphics in the film industry to create sets and images in place of actually physically constructing them. The most common software used in these types of films is called Autodesk 3dsmax. Otherwise, computer graphic designers tend to generate the algorithms themselves. 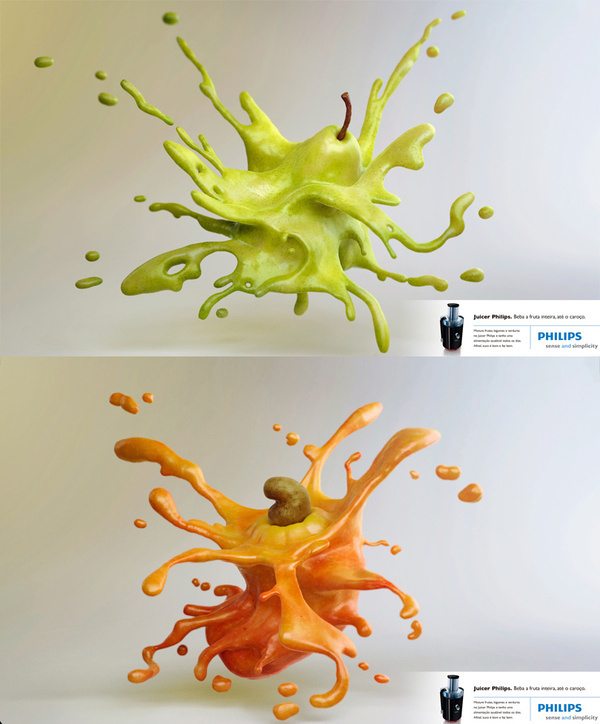 Pedro Conti is a Brazilian 3D computer graphics designer. Although he is much more concentrated in character design and development, I wanted to focus on his 3D work for a Philips commercial advertisement. What I really like about this project is that it borders on unpleasing to look at, but the pretty colors and the smoothness of the rendering say otherwise. I really admire Conti’s ability to visualize this slow motion explosion in an artistic manner. I’m not completely sure what the algorithm would look like, but you can definitely see that Conti is well refined in it.

I think it is an indication of his character design background because even the way that the fruit is render seems to have a personality of some sort and the way that it is handled with the splat seems to give it a lot of character.

link to his behance: https://www.behance.net/pedroconti

Inspired by Andy Lomas’ Aggregation 2, I am interested in finding something using mathematical rules to construct natural forms. SoN01R is a real-time dynamic artistic data visualization and sonification of quantum fluctuations. SoN01R looks like a 2D graphic at first, as it revolves and changes through time, it becomes a 3D sphere where particles keep flying around it. The combination successfully created a three-dimensional scene. The project is created by Frederik De Wilde who studies fine arts, media arts and philosophy. My admiration of this project mainly came from the four different stages of SoN01R, which will be shown in the following pictures.

For each visualization, SoN01R uses a real-time data from the Quantum Science Department in Australian National University. The method used here is to collect a physical quantum source first and then generate true random numbers in real-time which drive the audiovisual work. The final visualization is used Quantum fluctuation data, Processing, and Final Cut proX. The whole idea behind this project is to visualize something that is immaterial, short-lived, and universal. Watching the video, we seem to follow the transformation and to understand something that is very distant from our normal perception of moving/transforming objects.

Yoichiro Kawaguchi has worked in computer graphics since the 1970s and is known for creating 3D, generative, abstract models using an algorithmic formula he devised called the growth model. The formula is an attempt to replicate the organic shapes of shells, horns, plants and the like. His work is a unique integration of computer graphics, biological sciences and art.

It’s hard to find information on the specifics of his projects as the websites showcasing his work seem to have been made in 2001 (aesthetics and design say a lot). But in general, he is inspired by the natural environments and he seeks to recreate these spaces through in-house programs and algorithmic processes to create a new 3D digital space. 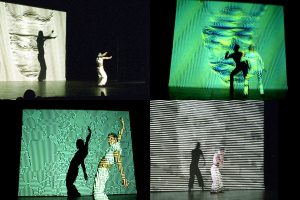 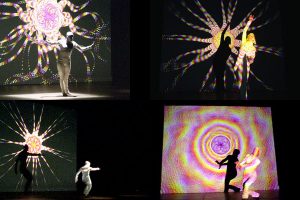 Some of his more famous projects such as Tentacle Tower or Ocean elicit audience participation. Ocean, for example, is a 3D space that is warped by the movements of the person. This piece is to simulate the emotional element of dancing through a visual language. The environment that is warped is created through an algorithmic process where the computer starts with a shapes that generates and mutates based on the movements of a body.

*link to about page*

Focused on advertising images, Miagui is an creative production studio. Their main goals include creativity, quality, innovation, and stepping outside of the limits around the creative process.

Because of their goals, Miagui oftentimes will utilize CGI in their works, such as the attached, to create unique pieces for their clients. This is a point the studio is clearly proud of, seeing that as you flip through their different pieces, you may view the percent CGI that was involved in the creation of that work.

Dong Liang, designer of Cambot-Memory, is a 3D artist based in Singapore. A lot of his designs are created through Maya, Mari and Photoshop. Images like this greatly remind me of the various animated works I have seen in the past and it enthralls me when I actually get to see who is the one behind all of this. I love the fact that Liang bases his artwork based on a “story”. He says that every piece of artwork has its own story to tell and I think that just allows the finished creative to seem more alive and understandable. Liang starts off with making various sketches in order to obtain the image that he wants, he then moves on to blocking the sketch to make it 3D. Liang, however, did not use use the same manner of sketches and blocking in order to make the rain. He instead used a machine called an nParticle system to attempt to recreate a more realistic look of rain.