This artist has been making some really interesting computational and generative art for the past 50 years. Jean-Pierre began as one of the pioneers of experimental computer generated art in the 1970’s. Much of his work is very abstracted relying heavily on color and line to create complex tactile canvases that imply depth and texture extremely well.  His work is quite responsible because he does not abandon the notion of physical production. As a result Jean-Pierre does create computationally designed works but he executes these works with specific physical medium installed into special printers. The piece below is made with sepia ink on paper and pen plotter drawing. It is  called “quantic notions” made in 1989: 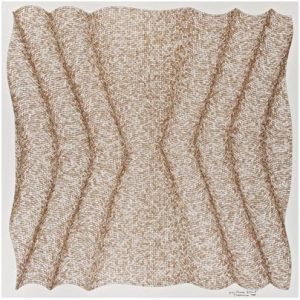 Jean-Pierre  describes his method for creating such works as a physically limitless, horizon less, infinite space for transcending traditional drawing techniques and space itself. He uses the assets of coding and programming to layer information that goes deeper than the visual. He is able to create pieces of incredible detail and scale without the strain of another traditional physical endeavor. I am very interested by this idea of computation and iteration. Jean-Pierre Hebert is able to create many variations on one piece of work before he is satisfies and this is easily done simply by multiple prints and changes in code. I can also see the connections in his style to modern day print-making. Using a physical input of etches or carves from a block, a print-maker is able to make many passes and address changes in the block. In this way, the computer code is Jean-Pierre’s printing block. His ideas are very modern and it seems he is beyond his time in generative art. Another older piece I quite liked was Vent Noir 2 (1989) below: 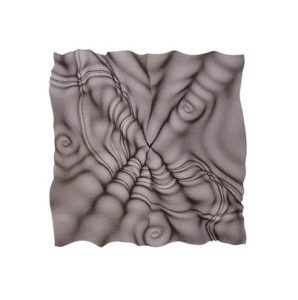 His pieces are evocative and memorable. They make the viewer question what it is they are seeing.  Jean-Pierre Hebert has also continued creating fascinating work well into the 2010’s. Another newer piece of his called “In Visible Cities Baucis” (2010) is pigment and metal type on paper, a digital drawing on niyodo paper. Below: 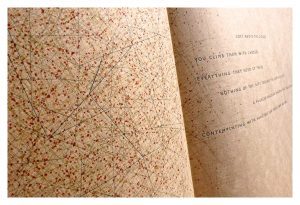 I think ultimately his work is limited by the programs he can use to code with and the data he has available. In his more current work he has resorted to larger more public pieces with much collaboration. His initial work is more creatively valuable becasue he was a trail blazer of generative art. In the new age of technology programmatic capabilities seem to evade him. He remains an influential personality.