This project was pretty cool once I started going. I drew inspiration from this picture, and the scale-like texture it has. 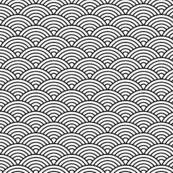 I had trouble figuring out how to get the for loops to work at first, but once I figured that out it went pretty smoothly. I took the concept from the lab this week of making a color gradient, and then also tried defining my own variable to actually make the concentric circles. Overall I’m happy with how it turned out, and I think I learned from this.