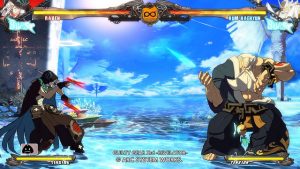 While I am aware the prompt asked us to refrain from using video games for this post, I chose this video game title for two reasons: I was actually introduced to this title by my younger brother, and the interesting interaction of 2D and 3D models and styles within the latest versions of the franchise.

As previously stated, I was introduced to this title by my younger brother. Both he and I are big video game fans, but we tend to stick to our respective genres: FPS and strategy games for me, and RPGs and fighting games for him. Guilty Gear falls into the latter category, and so naturally gained the attention of my brother. Normally this would mean I would have little interest in the title, but watching him play it, I was intrigued by something. As one can see from the top picture, the game typically appears in what looks like a 2D format. Most fighting games nowadays, like most video games, use a 3D format. When I noted this, my brother corrected me, saying that, in actuality, the game was 100% 3D. As I was confused by this, he proceeded to show me how the seemingly 2D character models were in fact complete 3D models, a fact which became immediately apparent when certain moves were made or events were triggered. 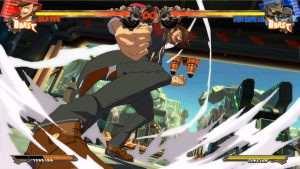 This setup of 3D models in a semi-2D style absolutely fascinated me and my brother, especially in relation to anime, another media form we’re both fans of and which has often used 2D formats but recently begun using 3D as well. Many have disliked some of the 3D adaptations or additions to classic anime shows, and my brother and I agreed that the use of styles such as the type found in the latest Guilty Gear games would allow for flexibility in areas like anime that wish to both retain the “traditional” 2D format while taking advantage of the possibilities 3D offers.

This graphic style apparently involves special modeling and artistic rendering, as it takes special effort to make the 3D models look 2D from certain angles only. This likely means that special algorithms are used which keep the “camera” or viewpoint fixed in certain positions until any one of various events are triggered, or special care is required to change how the models look from different perspectives. Considering the game seems to be partially developed in Japan, where anime traditionally comes from, it seems likely that many of the artists involved in the games creation had some experience in both 2D and 3D rendering.