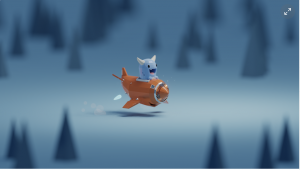 This project is really cute and something I would want to delve into because even though the subject looks as it if was more cartoony it actually has harsh edges and highlights to give it a more 3d generated or mechanical feel. The image generated provides a more realistic version of a 2d image causing the viewer to be tricked into thinking of the image more as an object or more able to be within their realm of “space”.  The algorithm that is generated most likely entails that there are variables that need to be calculated for the highlights and shadows to work precisely where they are supposed to be because if not then the 3d image would look more 2d than 3d. The artist itself was able to incorporate their own style of art by adding these cute designs instead of aiming for hyperrealism, which is effective in 3d designs, but this artist proves there can also be 3d depth in more imaginary characters.