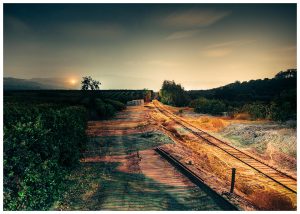 I was inspired by Ben Tricklebank’s and Aaron Koblin’s work called “Light Echos” where he broadcasts the patterns of light onto landscapes by a laser that is on a moving train. The artists utilize transportation and mount a laser to project various images such as maps, patterns and quotes onto the landscape. They represent space and time through the data of light reflecting off of earth. According to Wikipedia “A light echo is a physical phenomenon caused by light reflected off surfaces distant from the source, and arriving at the observer with a delay relative to this distance.” I admired how he was able to use coding and engineering to project the different images onto the landscape. This project was also a part of Doug Aitken’s station to station. Through this project these artists were able to use technology to manipulate how we look at the world around us.