Reuben Heyday Margolin is an American artist and sculptor. His main focus is his mechanically driven kinetic sculptures of wave-forms. He started with math and physics in Harvard University, but later he changed his path and got a degree in English. Later, he went to study traditional painting in Italy and Russia. He became obsessed with the movement of green caterpillar, which inspired him to create wave-like sculptures. He then began to make a series of large-scale undulating installations that combine the logic of mathematics with the sensuousness of nature. The scale of his project varies. His exploration of natural elements, forms and shapes using mathematical method provides him new perspectives to generate interesting artwork. I admire his work because his interest in waving, organic, natural forms allow him to combine his mathematical skills and background with his artistic sensitivity. By using his mathematical skills, he create a series parametric installation with tectonic logic. As an architecture student, these patterns and shapes are really fascinating and interesting to me. 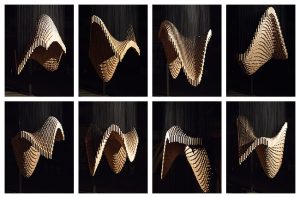 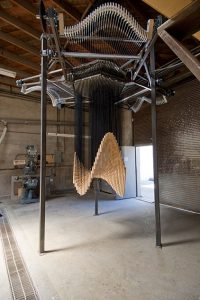