Yiran Xuan’s Looking Outwards 08  caught my attention because Yiran wrote about Darius Kazemi, who programs “Meme machines”. As a meme lover myself, I was surprised that there is a formula to be followed in the creation of memes. Memes have always felt so surreal and witty that only people would be able to come up and relate to them because of their shared experiences.  I was confused by exactly how ConceptNet works: “ConceptNet, a program that links words with each other by their meaning.”, so I did more research. ConceptNet is a freely-available semantic network, designed to help computers understand the meanings of words that people use.ConceptNet originated from the crowdsourcing project Open Mind Common Sense, which was launched in 1999 at the MIT Media Lab. It has since grown to include knowledge from other crowdsourced resources, expert-created resources, and games with a purpose, according to ConceptNet.io. It makes more sense  that using crowdsourced relations some of the Meme machine jokes are funny due to their vague nature that’s often open to interpretation. 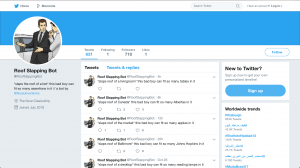