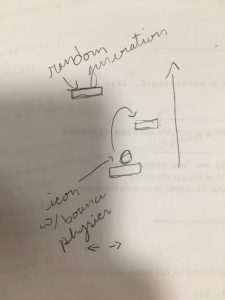 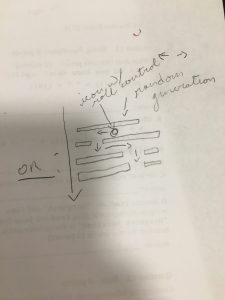 Currently, the idea for my project is a platform-based game. To create a comparison, it would be something like the IOS game Doodle Jump. There are things this game MUST have and things that, if time permits me, I’d LIKE it to have. For me the game must have randomly generating platforms, a vertically scrolling screen, keypad controls for an icon, good bounce physics for the icon, and the ability to detect when the player falls off the screen to restart the game. What I might like to add to the game eventually is some sort of extra obstacle- an enemy to avoid that flies in the air, or an object that can be collected. I might I also like to add a “you lose” type screen that displays the number of platforms jumped on, and the ability to start a new game when the keyboard is pressed. The second drawing (the “or”) is the possibility, if I find this too difficult, to instead do a vertical scrolling game wherein you must roll an icon down the screen and avoid being squished. A goal of mine for this project is also for the game to just be aesthetically pleasing. I’m not a designer, but I want this game to LOOK very sweet because I think design is really important when it comes to art, or specifically interactive art. Obviously, a prior project to look at is the original game Doodle Jump, as well as many, many knock off games (fast follows). There is another indie point-and-click story based game, however, whose aesthetic is more that of the game I want to create. Night in the Woods is quirky and beautiful, with great, great color palettes, and also very nice physics when it comes to characters running and jumping. This is the look I’m going for.