My project idea is to recreate the schoolyard clapping game “Shotgun” in Javascript. The game consists of each rounds, within each round two (or more) players face each other and simultaneously play one of three moves: “Shoot”, “Reload”, and “Shield”.  Shielding blocks all incoming bullets, and can be used any round; reloading adds one bullet to the chamber, but leaves the player vulnerable; shooting fires a bullet toward the (or an) opponent, but can only be used if the player has at least one bullet in the chamber already. The game ends when one player plays shoot while their target is reloading. This game has a luck element but is also strategic, good players being able to predict when their opponents would be left vulnerable. Another important element to the game is clapping, which helps ensure simultaneous play; typically, players would clap their hands on their thighs twice before making their move, establishing a beat.

For this project, I intend to represent the two players as two animated dragons spitting fireballs at each other. Players would have 4 separate key each to play, 3 for the moves, and 1 for “clapping”. I will play a short sound regularly to establish a beat, and players would need to press the “clap” button within a certain time frame, or they suffer consequences (like a rhythm game). I would need counters to keep track of the refresh rate. I will also build a random move-generating AI. For most of the interface, I will draw outside of the program and import in as images. 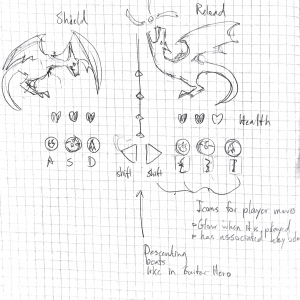