For this final project I wanted to do something with Studio Ghibli and their music. So I decided to have a rhythm game where if you press a certain key then a character from one of the Ghibli films will pop up. If you press two keys as the same time and have matching characters then the music of the movie will start to play until you find another matching pair. The characters will just be bouncing up and down when they appear on the screen and I might add some actions to them. I will limit the keys from A-L and Space which will mean there will be 10 characters total and 5 pairs.  Also, along with the music being played the title of the movie or film will pop up on the screen.  This game will have a plain background until there is a match where I will load in a picture background/ scene from the movie. 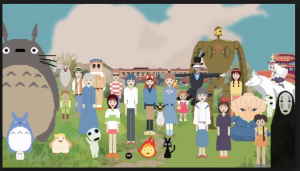