I am uploading a zip file instead of the sketch file since the program contains sound. 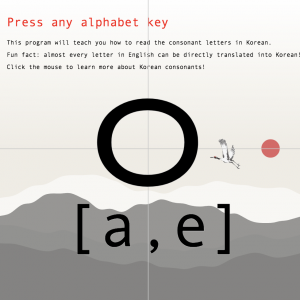 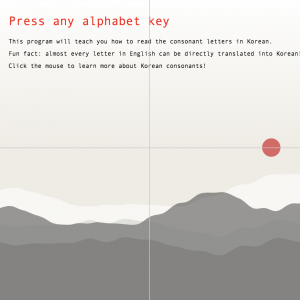 My final project is an educational program that teaches the user to learn (hopefully) about the Korean alphabet: Hangul. Hangul is very easy to learn because it does not require people to memorize the meaning of each character. Since Hangul is an alphabet system like English, anyone can read without knowing the meaning itself. I only focused on the Consonant letters of Hangul so the alphabets showing up on the program does not make a full word or a letter.

As I was writing the program, I realized how complicated it is to teach a language even though I initially thought Hangul was relatively simple. Thus, I am planning to expand on this project and hopefully make a program that covers not only consonants but also vowels and maybe some simple words.

(My original plan was to make the user draw on top of the text using turtle graphics, but somehow the code didn’t work. I canceled out the turtle graphics part. )