The digital art and design studio, onformative, was commissioned by IBM to create a permanent installation for the new IBM Watson IoT Headquarters in Munich last year. The result was a data-driven art installation visualizing the different facets of the Internet of Things and cognitive technologies called “ibm flux”.

From ribbons of light to responsive gradients, the visual content is data-driven and interactive based on real-time time input of various sensor inputs and weather forecasting and culminates in an upward motion with a pulse and positive momentum. The shape was inspired by the IBM Watson and realized by using thirty-two curved screens span over eight ribbon displays.

“flux” activates the space and demonstrates the significance of cognitive technologies and A.I. in our present world and future – reflecting the ideation, innovation, growth and creative power of technology.

John Cage was an American music composer that paved the way for randomness in music. Many of his musical compositions explored theories of chance through methods such as implementing deliberate randomness processes in their productions. He wanted to challenge the nature of what sounds we expect to hear by expanding his compositions to comprise of unforeseen/unintended elements of sound.

In the score of his “Fontana Mix,” we will find 10 pages of paper and 12 transparencies of graphic notation of music with text made up of various languages and individual letters, 12 different lines of different colors, and 16 black squares representing different vocal sounds of different singing styles. Cage uses wavy/curvy lines with varying texture and thickness to indicate the different sounds within the mix. I admire John Cage’s work because he created a chance system to render unfixed compositional techniques (like an algorithm for indeterminacy) to utilize chance into his musical compositions.

Parag K. Mital is an audiovisual computational artist and researcher. He creates his artwork through the building of artificial intelligence algorithms. I am captivated by the way Mital has explored deep learning, machine learning, film, eye-tracking, EEG, and fMRI recordings to generate his artistic productions.  In his work “In the Style of Klee,” he utilizes these generative model processes and constructs an audiovisual perception of what looks like a video from the view from a car window as the car is driving through the streets. In this piece of work, it can be seen that it is inspired by the art style of Paul Klee. I admire how the Mital is able to bring what looks like a painting with Paul Klee’s style to life. He demonstrates the complexity yet simplicity of traditional fine art styles and brings it together with modern experimental generative art, giving his audience a unique film experience through traditional art and generative augmented computational science.

I first encountered Pixar when I just got into elementary school. I had watched a lot of two dimensional cartoons. Animations were not really a special thing. But when I saw a Pixar movie, I was astonished. How can people make an animation in such realistic forms and movements. It seemed to be a magic to me that designers and computer scientists could generate such realistic and stylistic animation on computers.

Pixar began in 1979 under a group of talented people. Edwin Catmull and Steve Jobs, two of the most important figures, changed the whole animation  industry as well as the film industry. The GCI animations were just as realistic and complex as real man actings. With its unique concepts and messages hidden in each film, Pixar’s animations immediately became well-known starting from the masterpiece Toy Story (1995).

I am currently learning a lot about three dimensional modeling and renderings, and I started to formerly understand the complexity and difficulties behind just creating one three dimensional rendering. Pixar invented its own rendering software, Renderman, and contributed greatly to the virtual computer graphics in the recent decades. Pixar appeared to be a magic when I was little, but now, I am starting to grasp the tricks behind those magics.

Limbo is a puzzle-based video game developed by a small, Denmark-based studio known as Playdead. Beginning in a dark forest without any introduction or tutorial, the game details the terrifying challenges of a young boy as he travels through “the edge of hell.” Though I rarely show interest in video games and get motion sickness from 3D animations, I fell in love with the minimalist nature of this game and its stunning 2-dimensional visuals. With eerie, film-noir style graphics and intuitive controls, Limbo has influenced both my own artistic style as well as my admiration for interactive media design.

Starting as a one-man project by concept artist Arnt Jensen in 2004, the game development expanded to a team of 16 by the time of its release in 2010. Much of the artistic direction and concepts for Limbo derived from Jensen’s admiration for the film noir genre and his desire for minimalistic controls. The absence of text, arrows, and buttons keep you fully immersed in the game and encourage the user to decipher the platform on their own. While the original designs were created using Visual Basic, the team moved to Visual Studio during the development process. After overwhelming success following the game’s release, Playdead expanded to a company of 35 programmers and designers and has released its second game, Inside, which has received even greater praise. 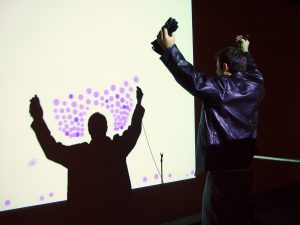 I personally really loved this project because of how whimsical it is. Interactive installations were one of my favorite genres because it invited everyday people to engage with art and they did just that. I was amazed by the capability and complexity of code in 2004. I can imagine the top down design but have no idea how to implement it! These two aspects make the project admirable.

Documentation for Project by Golan Levin