Fade In, Fade Out, Cross-Fade
You should be familiar with the terms fade in, fade out, and cross-fade. As a reminder, here’s a schematic to illustrate these terms. Remember that, when incorporating sounds into compositions, any sound without a “natural” beginning and ending should be edited with a fade in and fade out to avoid clicks and pops at the beginning and ending. When joining sounds together, one often overlaps the fade out of one sound with the fade in of the next sound, creating a cross-fade. 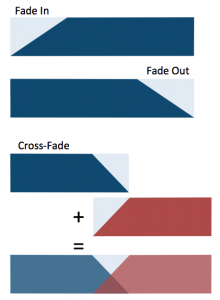