Every first Friday of the month, a gallery run by a CMU professor up in Bloomfield showcases artsy / cool games.  This month, its “Analog Pleasures,” and seems super related to our class.  Per them:

A special show featuring videogames that transcend standard hardware. Have you ever played a VHS, an LED strip, or an oscilloscope? Have you ever used your sense of smell in a videogame or strapped a joystick to your crotch? This may be your only chance!

Anyway, I’ll be there if anyone else decides to come.  This post brought to you by your local ETC Students Chance and Conor.

Problem: I live in a double duplex (quadplex?) with one washing/dryer unit in the basement.  Living on the top floor, it’s mildly inconvenient if I take the three flight journey to the basement only to find someone else already using the laundry machines.  Then I often forget I was waiting for laundry, or take too long and end up having someone else take my slot.  I believe there is a better way to not only check if its being used (more than a webcam!) but also to smartly inform behavior if it is in fact being used.  While this is somewhat a selfish assignment from my end, I do think processes like this that can allow users to not exert themselves on staircases are helpful overall.  My grandmother lived in a two-story house, walking up and down the steps daily, for probably too long, and this would ease the burden.

Solution: A system that broadcasts availability of the laundry machines, and also reminds users upon their availability after checking to ensure efficient use patterns of both.  Users are alerted via a beep and red LED.

Proof of Concept: The user would activate the system whenever they were wanting to do laundry.  If available, the system would immediately beep and let them know it was “safe” to do so.  If not, the system would remain dormant until either a) the wash cycle on the washer had passed or b) the washer stopped running.  Choice A is more of a failsafe in case the accelerometer isn’t working as it is a “maximum possible time the washer could run,” but the real meat of the concept is in B. An accelerometer responds to the washing machine movement to let the user know easily if it is in use or not. 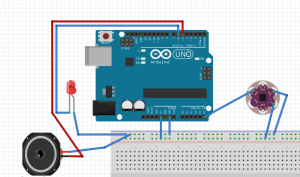 Basic sketch w/ speaker and LED on digital out with an overkill accelerometer only outputting its change in Y.  A less intense accelerometer would be fine, but this is the one I found first.  The only major assumption is on the accelerometer being 3 flights below the controller, but it wouldn’t be that hard to make it broadcast wirelessly.

Single-state of waiting when powered on by the user to check the laundry machine availability.

Hearing all of this up front is good, I think.  In my field, I know I get slightly annoyed or frustrated whenever I see something that has been done a thousand times before, so this list as reference will hopefully make working with everyone more friendly.  While I think there is definitely creativity to be had in all of these genres, being pushed to make something totally unlike any of them will do us all good overall.

I enjoyed the reading.  The part that sticks with me the most is how we as humans choose to personify things, tools, etc.  Here, literally giving voice and sentience to the suit.  It feels almost like the main character died once he stopped having the imagination to view his tool (the suit) as a living thing.  Imagining it as a hallucination dehumanized or deanthropomorphized the suit, and happened right before he died.  Tools as extensions of ourselves instead of separate, clunky, orbiting things feels like the philosophical lifeblood of what I’ve been taught in any industrial/product design I’ve taken.

Another small thing I really liked was the suit’s conversation with the drone missile at the end.  It felt like Toy Story in that our playthings or tools may have lives of their own outside when we are using them.  Given that the suit is sentient, that’s to be expected, but still a nice thought to be had when empathizing with others’ lives outside of our contact with them.

I’m a computer scientist by training and job experience, taken robotics and microcontroller courses, some Electrical Engineering and Physics related to circuity.  I also worked in a woodshop for a couple years and have a good working knowledge of it all.  Currently, I’m a designer.  Looking forward to working with you all!