In my last steps, I learned about light, animation, and finishing up a Unity project.

Some screenshots of the process: 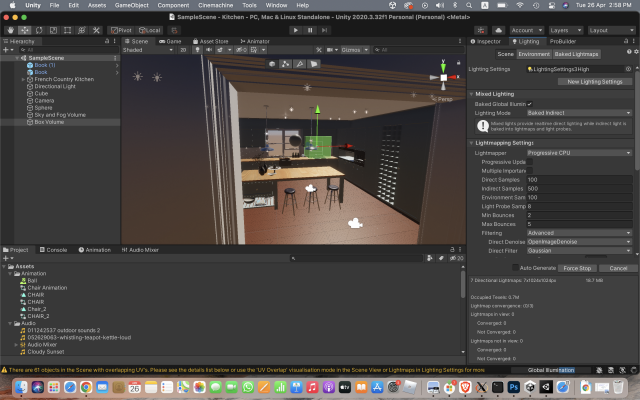 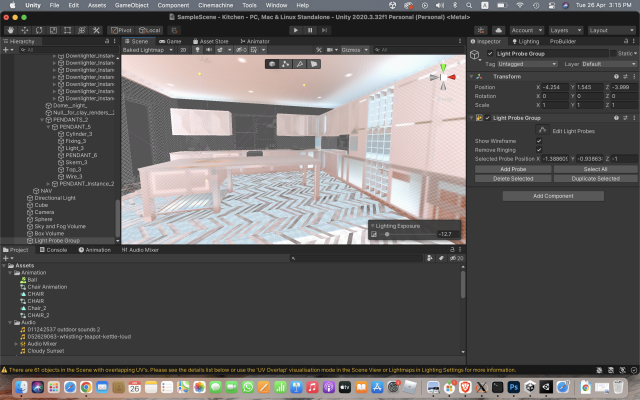 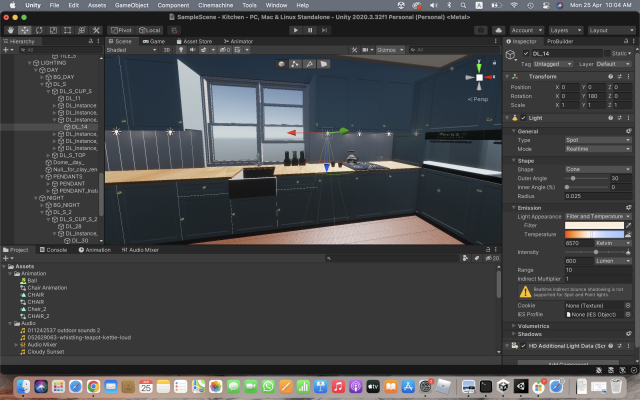 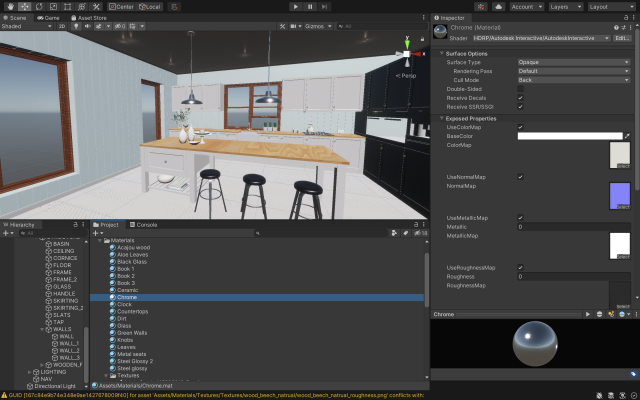 (Playing with materials for the Kitchen) 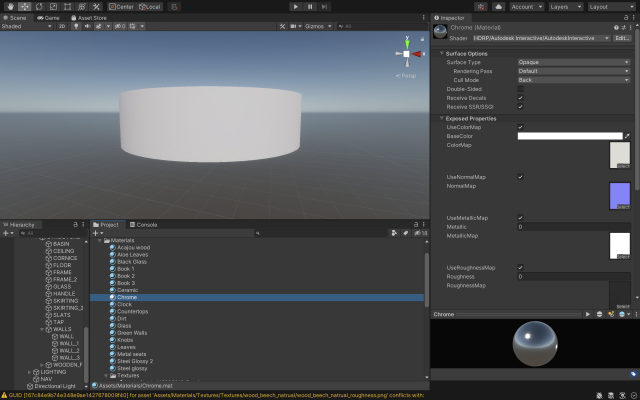 (Outer structure of the kitchen)

My goal is to complete the Unity tutorial provided by Linkedin Learning and, in the end, have a walk-through kitchen. These are screenshots of what I have completed so far. 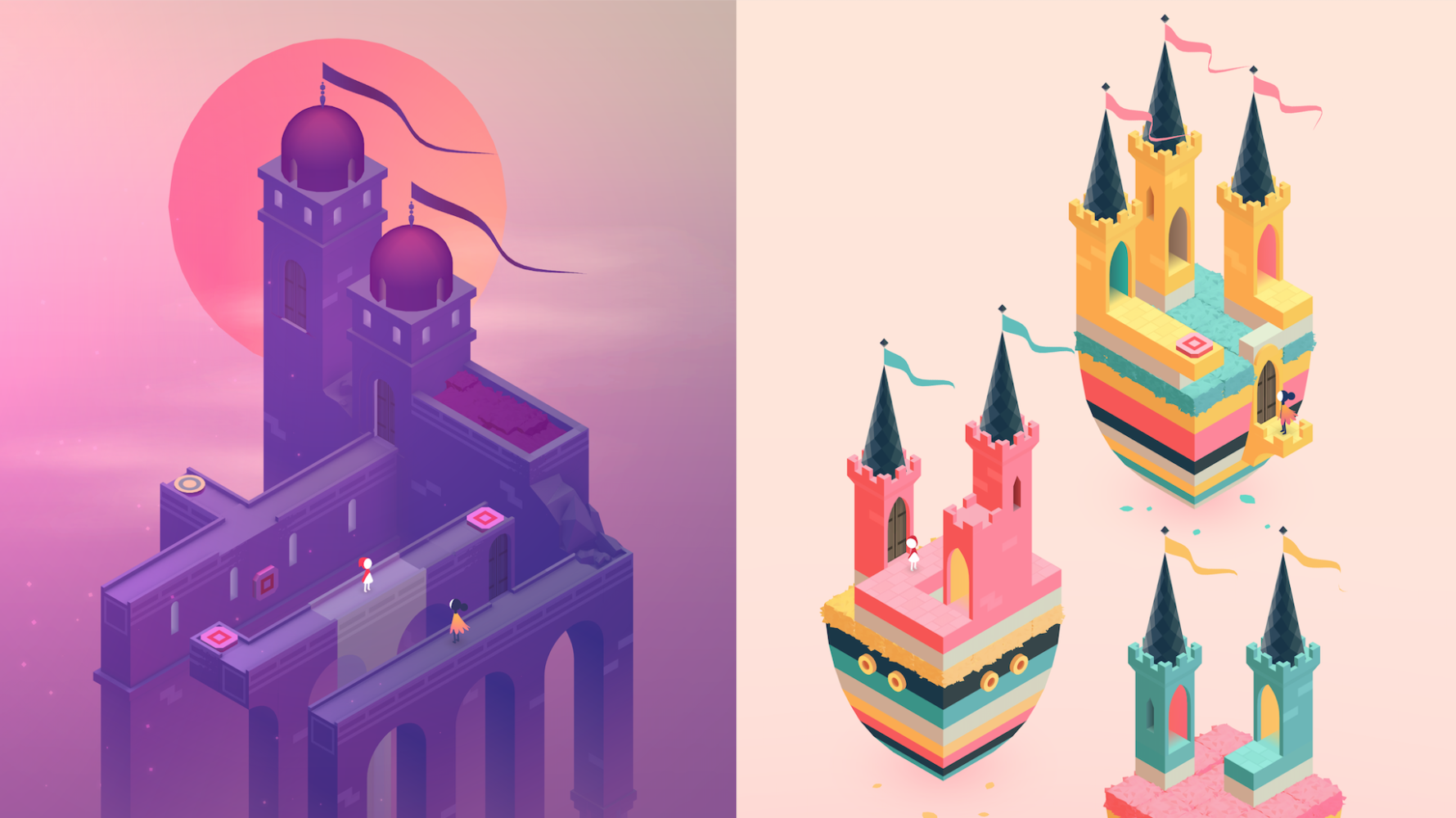 I’m inspired by the video game monument valley 2 created on Unity. The 3D-made environment, when presented to the players, looks moreso 2D, creating an illusion that distorts the perspective of the players and their understanding of the map. This element adds to the surreal, magical atmosphere of the game which I love and appreciate. I love how illustrative and fairytale-like the game is and how it doesn’t seek to imitate reality. After some research, I found out how the 3D-2D effect was created and it was through building custom extensions for Unity. This prompts me to look into Unity extensions in the future and what effects I’ll be able to create with them. In my work, I hope to create something surreal, dream-like, and ambient like the scenes in monument valley.

My goal for the rest of the course is to learn how to use the basics of Unity and by the end, create a walkable, 3D terrain. I plan to follow tutorials and record evidence of my learnings.

Discover love through this website which notifies you when your crush walks within 50 meters of your proximity and likes you back.

There is a fictional version of this app that exists in a popular webtoon and drama. We wanted to turn this fictional idea into a reality to gauge people’s reactions to a similar product. Will people become more courageous when they like someone? Will this app help lessen missed connections?

The process of creating the website was challenging as we weren’t familiar with glitch and didn’t know if we could find the geolocation of the user nor store their data. 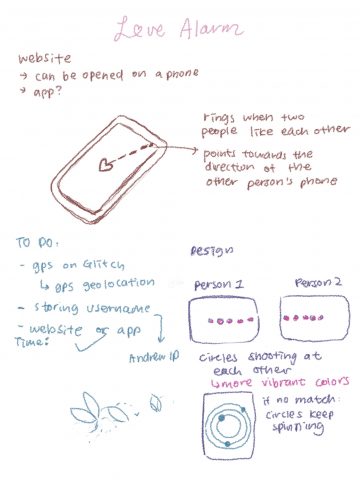 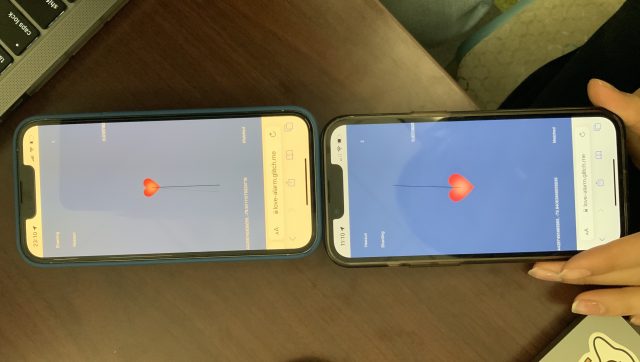 I found the project Joyride, created by Brian House, especially interesting and also humorous. The ability for the artist to be able to determine the path of a stolen phone emphasizes the dystopian implications behind pieces of advanced technology: with a smartphone at hand, anyone’s location is trackable. At the same time, the reenactment of the thief’s journey is humorous in that it seems to mock the thief in that even though they have stolen the phone, everything is still under control and surveillance. The fact that the project was done through google map street view furthers the profound control and web of information on the internet. 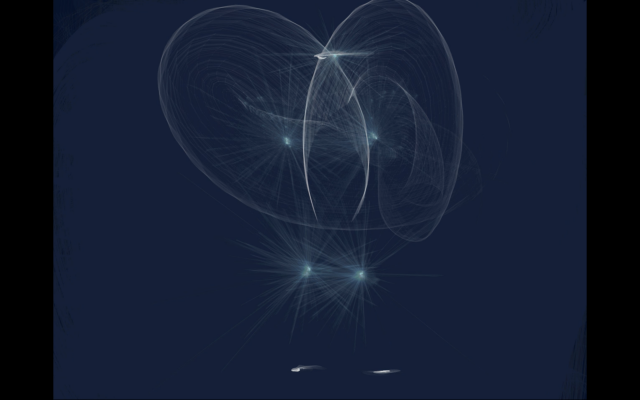 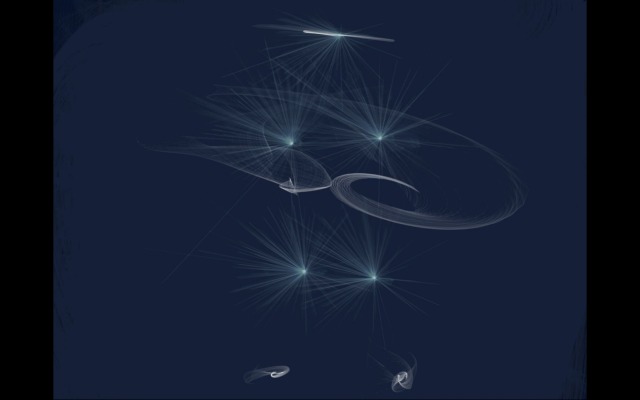 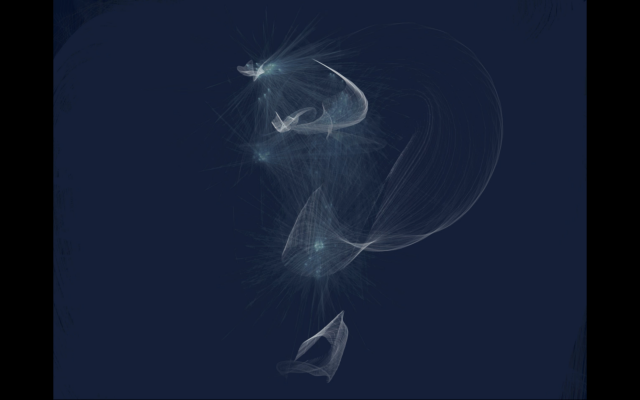 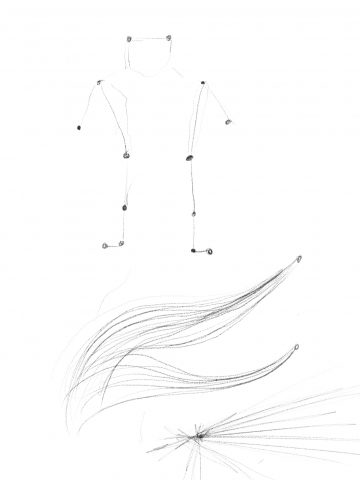 I wanted to play with weightless, fluid visuals that respond to one’s movement, something that can enhance the lightness of a dancer’s movement. Hence, I played with visualizing particles that follow specific points of the body: hands, feet, knees, elbows, and the head. I am happy with the vague silhouette that is visible when one walks around and also the abstract fluid forms that result from the swinging of an arm or kick of a leg.

When reading about Más Que La Cara Overview, I was surprised to learn about the small intricate details of considering the software and tools to successfully create a public, interactive installation which are often overlooked. It is critical to consider factors such as the exposure of light on the face influence facial detection in public spaces. The importance of this consideration relates to the fact that most facial recognition software are not racially diverse which surprised me. It was also incredibly humorous to me when watching Face Recognition and learning about how the limitations of facial recognition software led police to use actor Woody Harrelson’s face which was a look-alike to the thief in order to catch the thief. 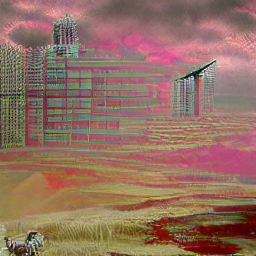 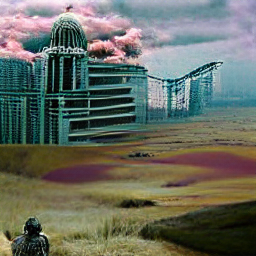 (dreamscape of dystopia in apocalypse) 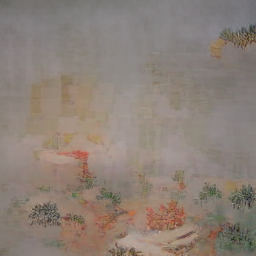 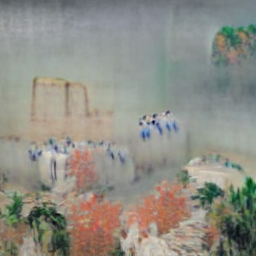 (the Song Dynasty in the style of an impressionist painting)

It was very intriguing to see the program generate these versions step by step. However, by the 400 iteration, the images started becoming more and more similar where I saw little variation. Hence, I played with multiple text prompts to explore the many surreal and imaginative images that could be created.

Blobfish, Diner: For the last few weeks, the blobfish have been congregating at the diner. They sit in a circle around the fryer, cooking their food. Some of them stare at the fryer with envy, while others watch them with skepticism. But everyone seems to be contentedly slurping their food.

There was a parasite in the rainforest, that looked like it was made out of a bunch of humans. The forest had believed that the parasites were killing the trees, but it turned out that the trees had been going crazy, having some strange dreams. Their dreams were filled with skulls and bones and other things that shouldn’t exist. That was probably why the forest had sent the giant trees to find these humans.

Reflection: It was very humorous to experiment with random words and themes. The stories that are generated often go against my expectations and play around with different texts to create imaginative and surprising stories.