Jean Tinguely, Swiss kinetic sculptor known for the self destructing machine (1960).
In the 1950s, he produced a body of work known as metamatics. 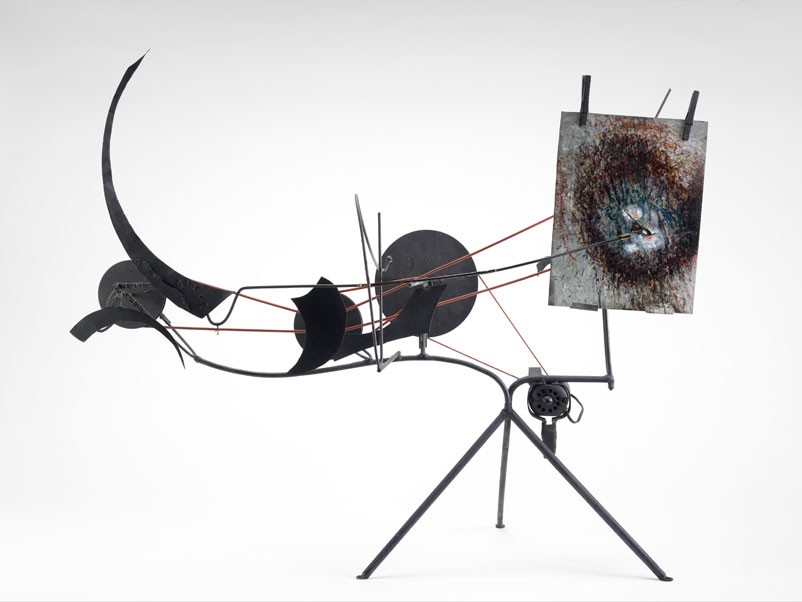 These were a parody of American “action” painting, such as by Jackson Pollock. 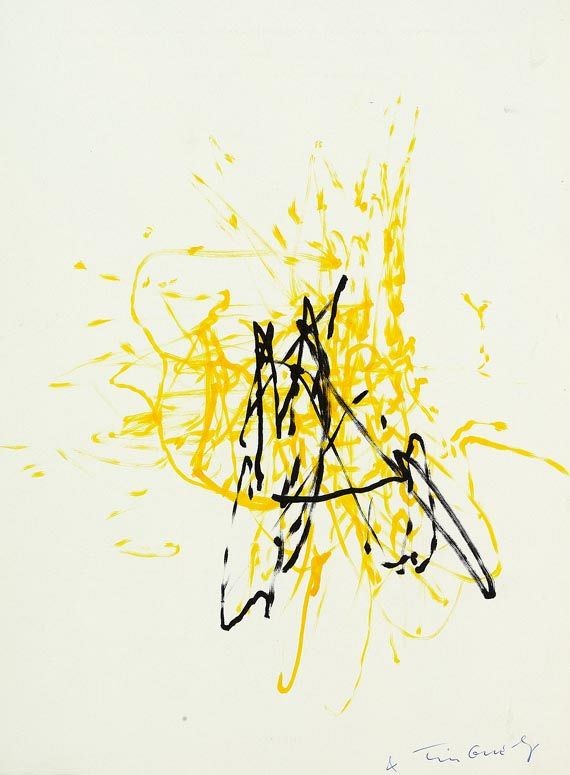 In the early 1950s, American mathematician and artist Ben Laposky made the first images generated by an electronic computer, photographing the output of an oscilloscope. 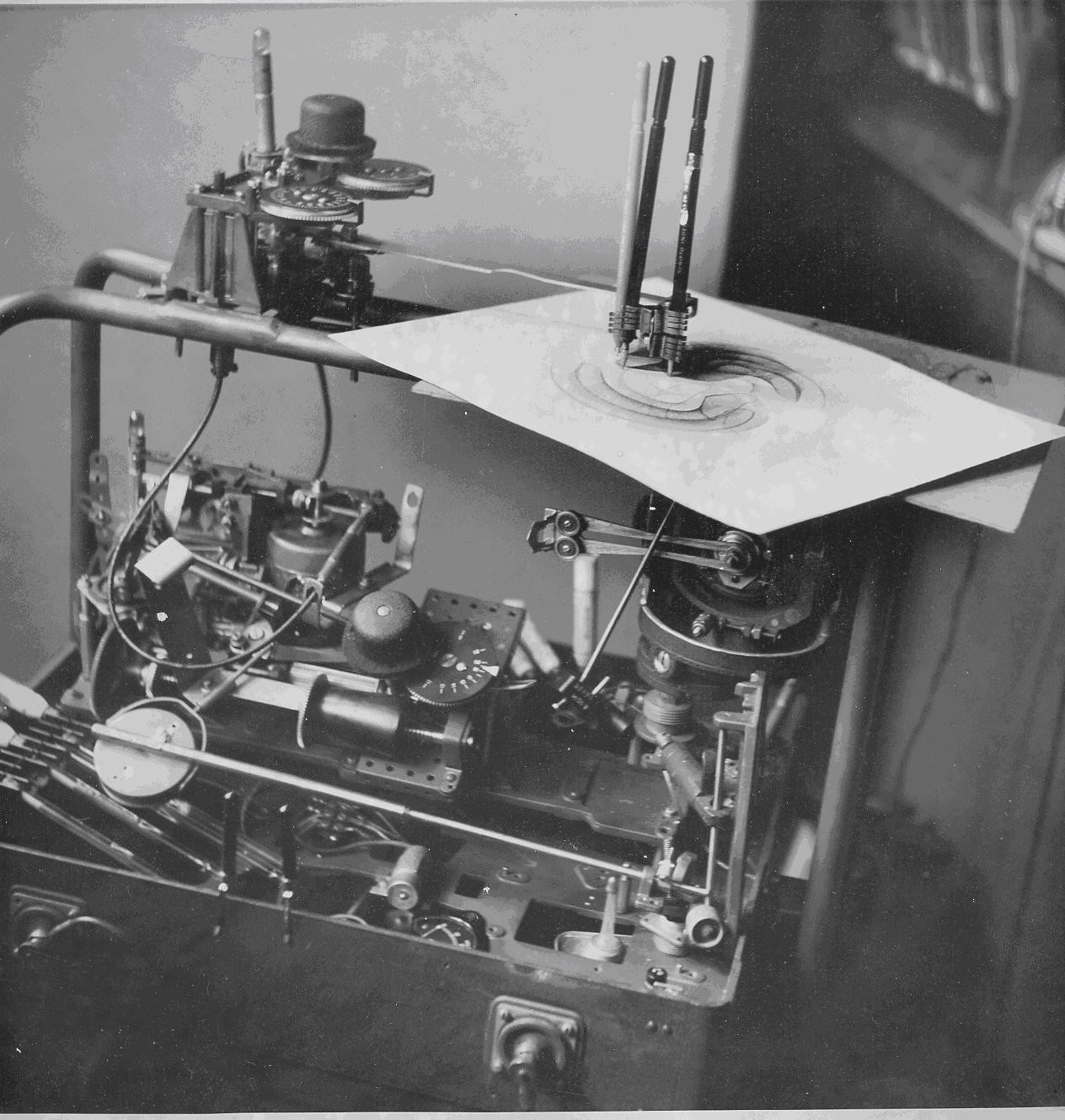 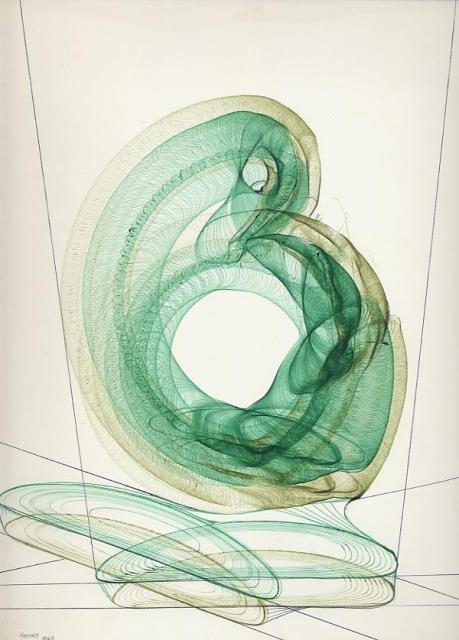 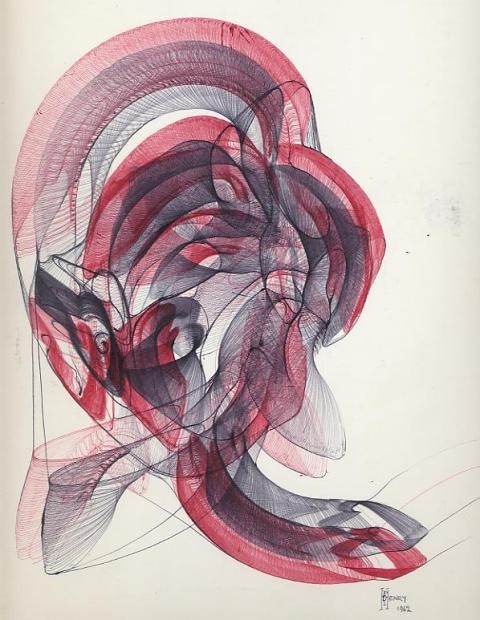 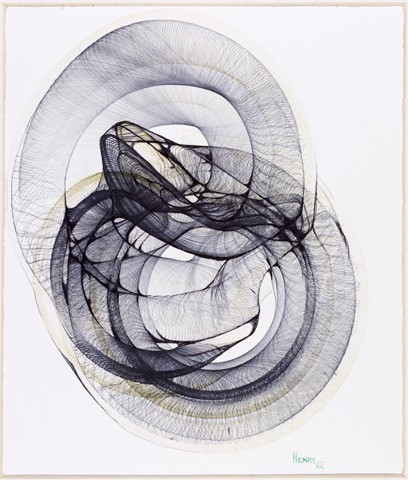 These artists seemed to be fascinated by the apparent randomness (unpredictability) of these machines and let them “do their thing”.

On the opposite side of the algorithmic spectrum, there is Sol LeWitt, who didn’t use computers but conceived many of his works as a series of instructions. In point of fact, they were indeed intended to be created by machines: art gallery interns. 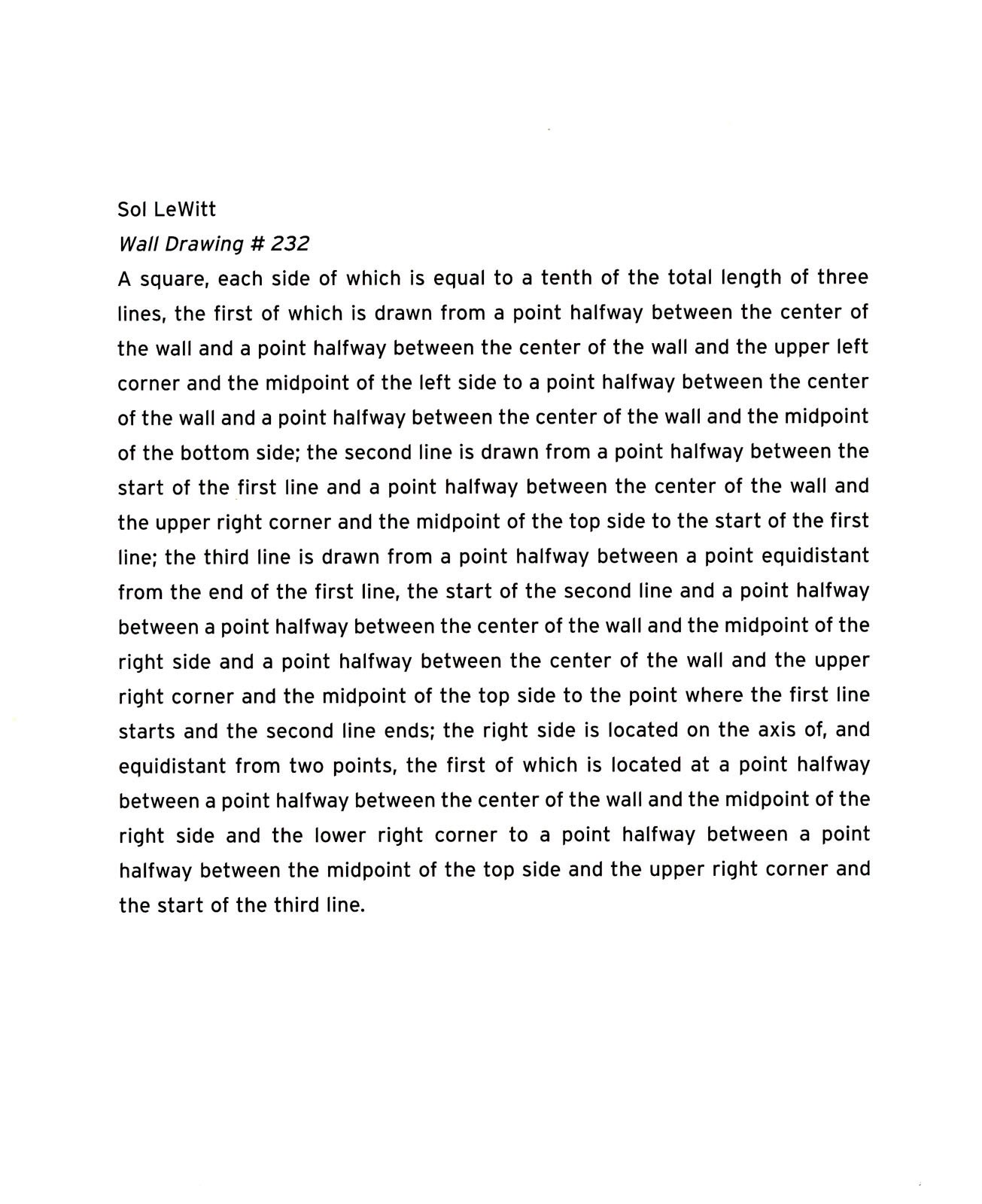 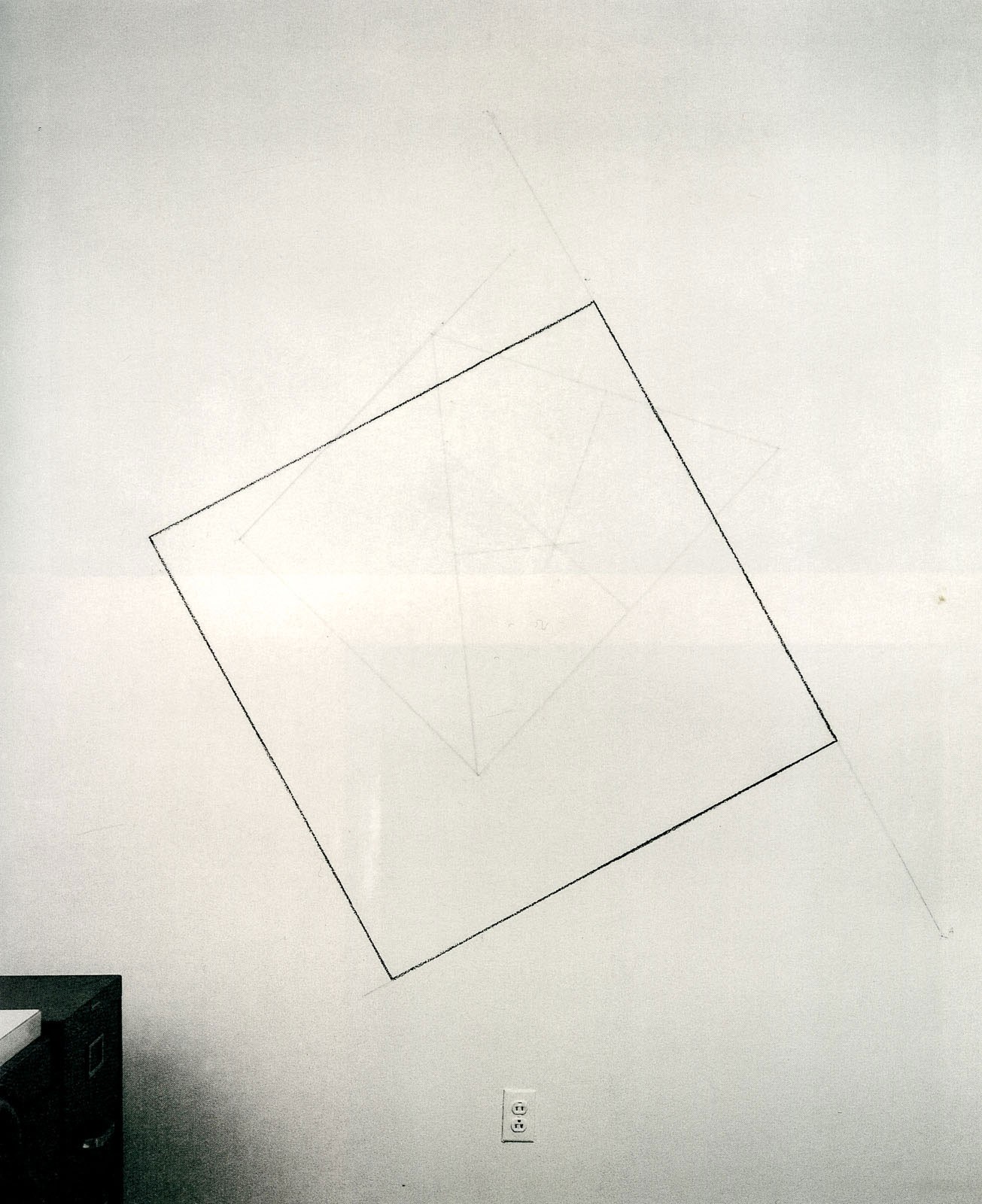 This is the result of the sequence of instructions. What is the status of authorship and ownership when the works are just instructions that anybody can execute?

Sol Lewitt was part of the Conceptualist movement. In the 1960s these artists enjoyed provoking the question as to whether an artwork could take the form of a set of instructions, i.e. if the artwork, technically, had no material existence. Another participant in this (and the related Fluxus movement) was Yoko Ono, who created a book of instructional “paintings” called Grapefruit. 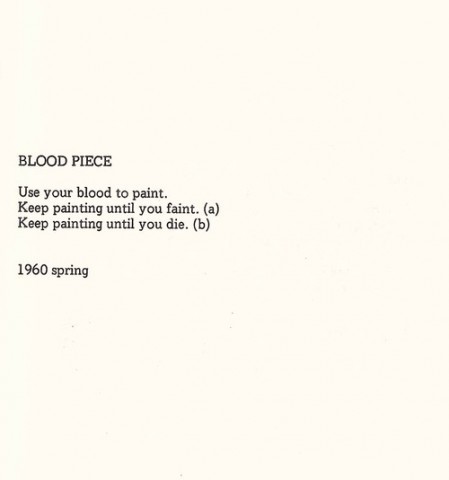 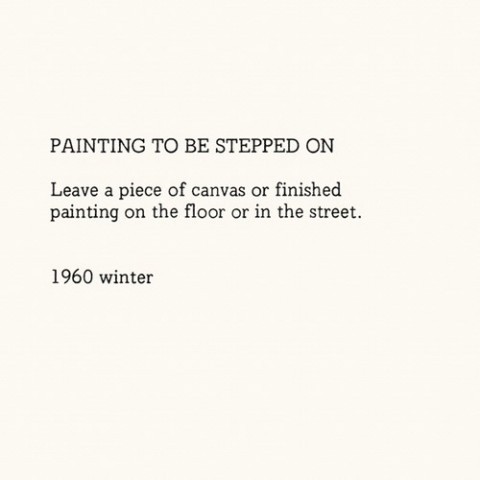 Another form of procedural or rule-based art evolved around this time as well: Optical Art, or “Op-Art”. A leader of this movement was Hungarian artist, Victor Vasarely: 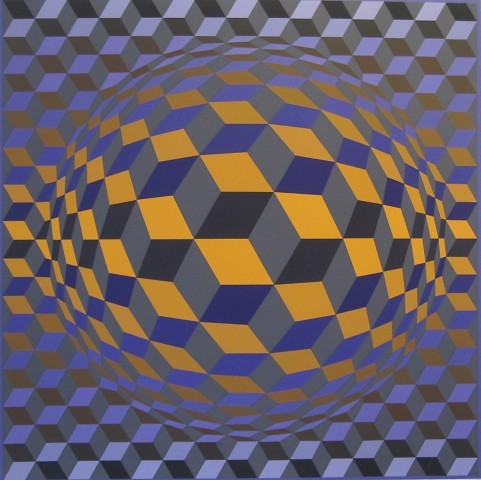 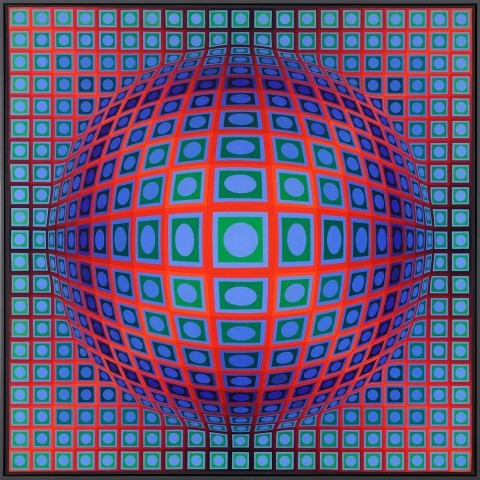 British artist Bridget Riley was another: 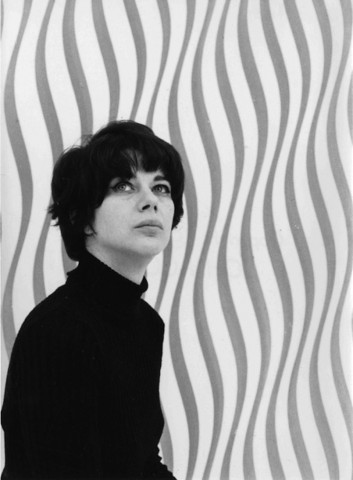 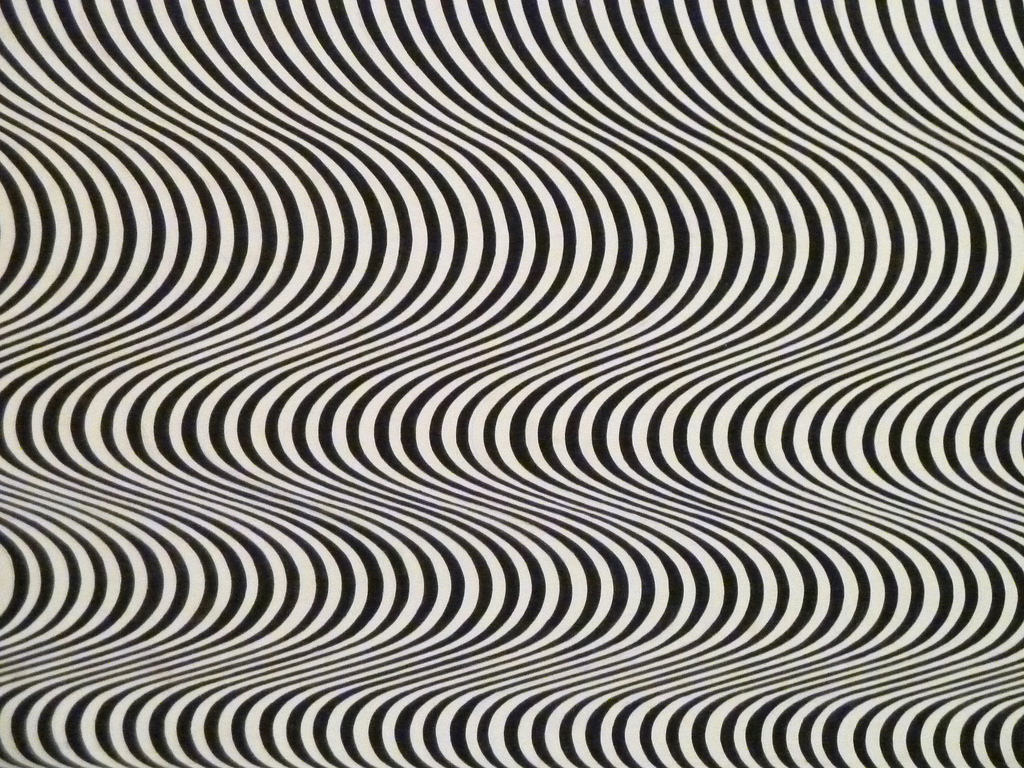 There was a major exhibition of Op-Art, “The Responsive Eye” at the MoMA in 1965. (The catalogue is really worth a look.) One important aspect of Op-Art was its “interactive” quality. Often the viewer became very involved in perceiving the work: moving around it, stepping back and forth, and blinking a whole lot. 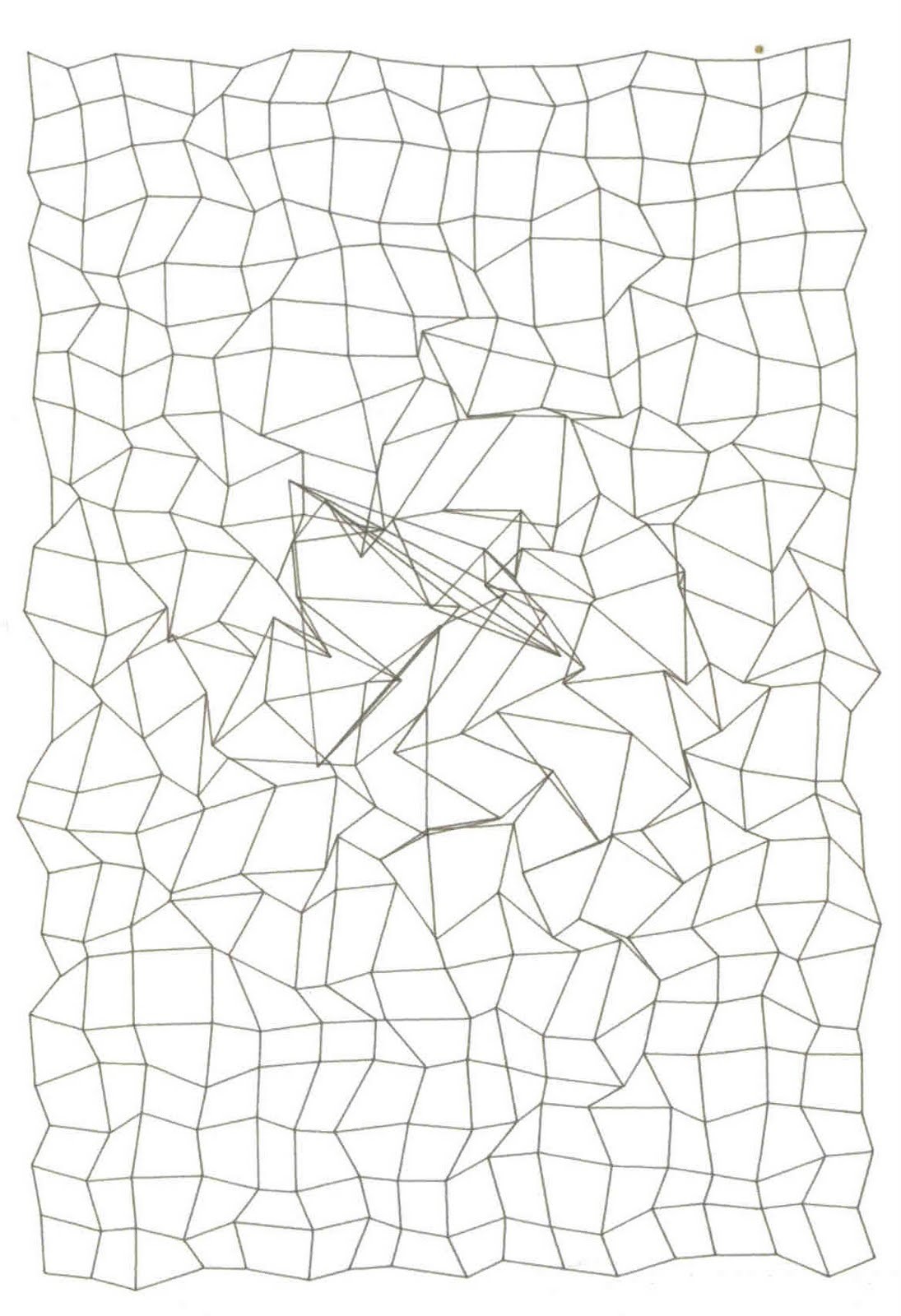 In the mid-60s, as the first image plotters became available, artists began to obtain access to mainframe computers. Usually their access was limited to late nights and weekends. 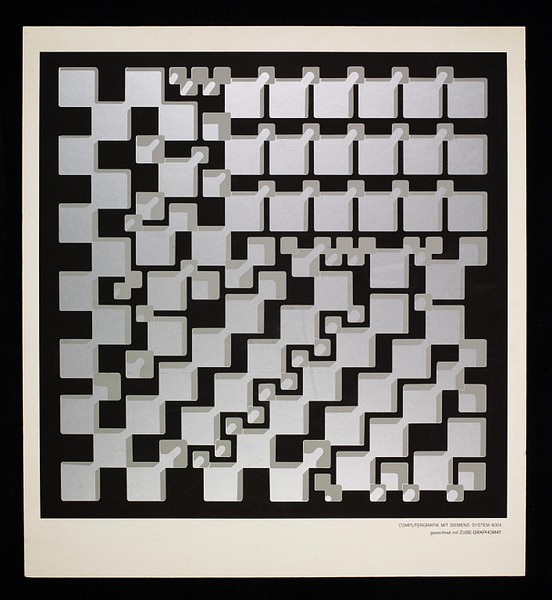 Nees had to write his own graphics libraries. His works often deals with order vs. disorder. He also made the world’s first computer-generated sculpture in 1968 using a computer aided milling machine. 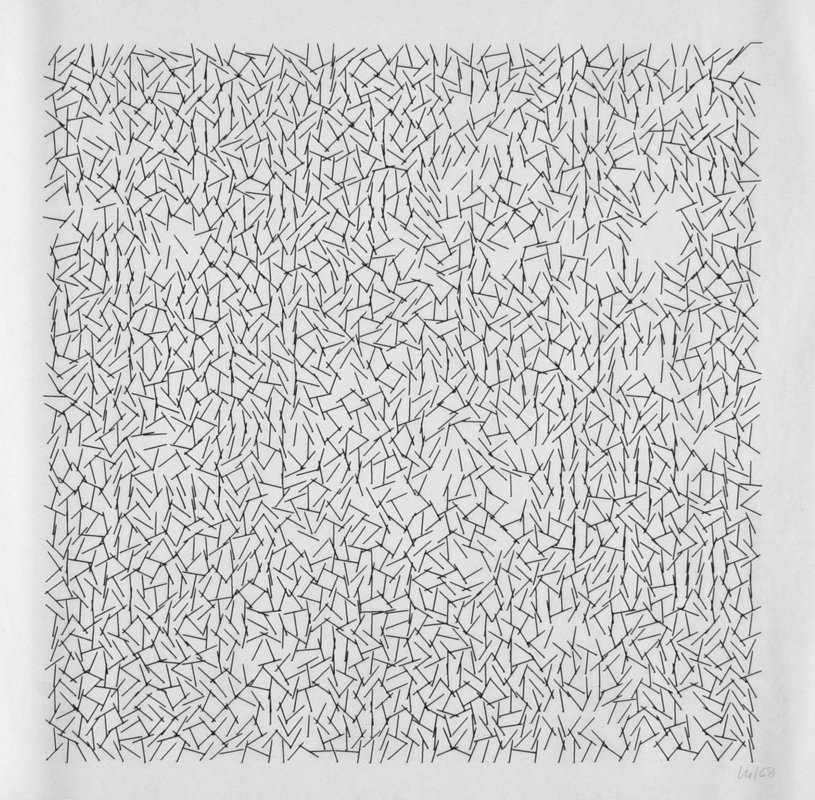 The computer art movement was international. Vera Molnár was a French Hungarian artist. 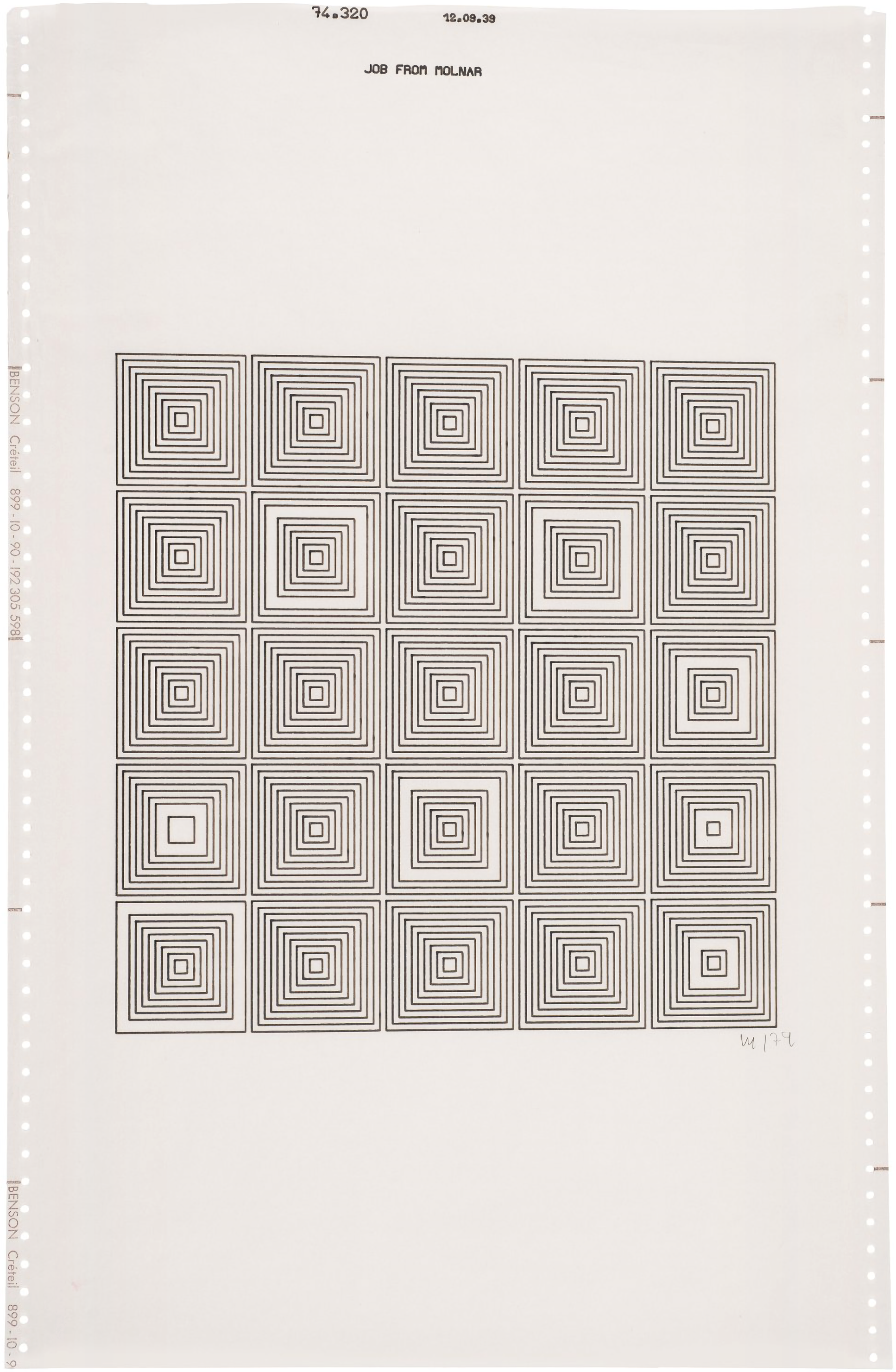 Manfred Mohr is a German-American artist, based in NYC, active in computer art since 1968. 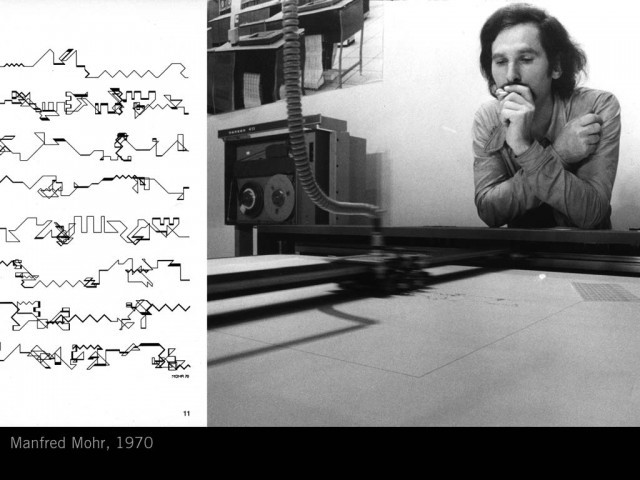 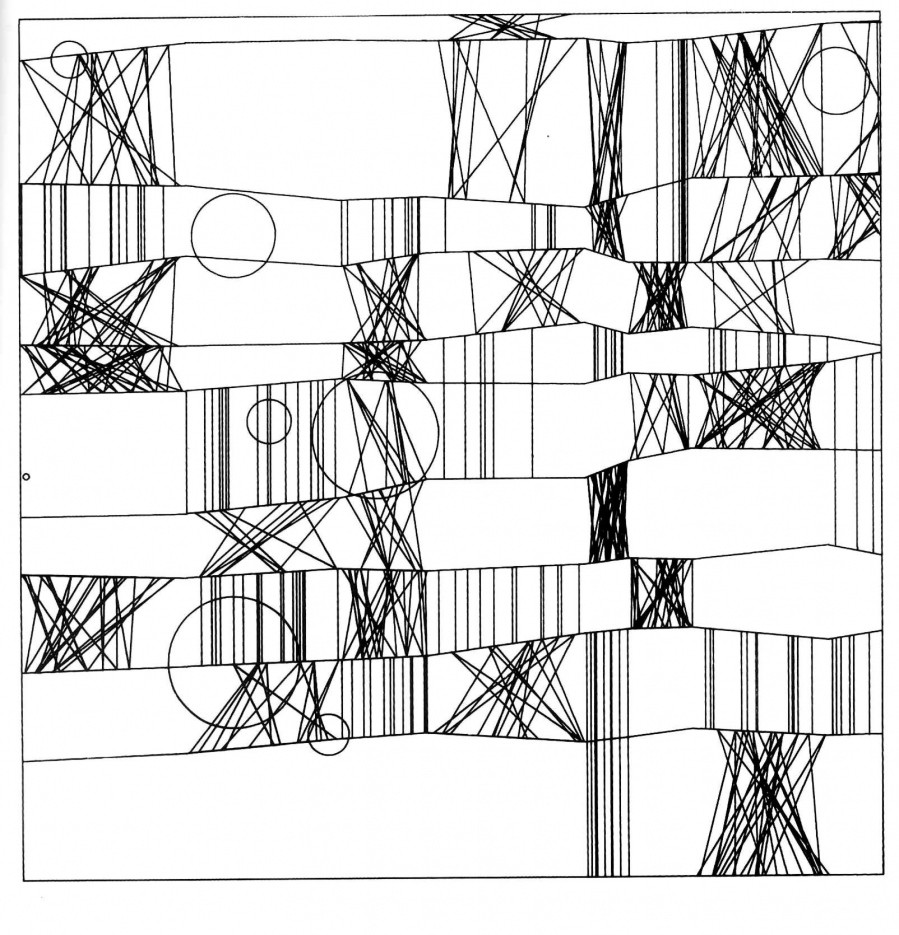 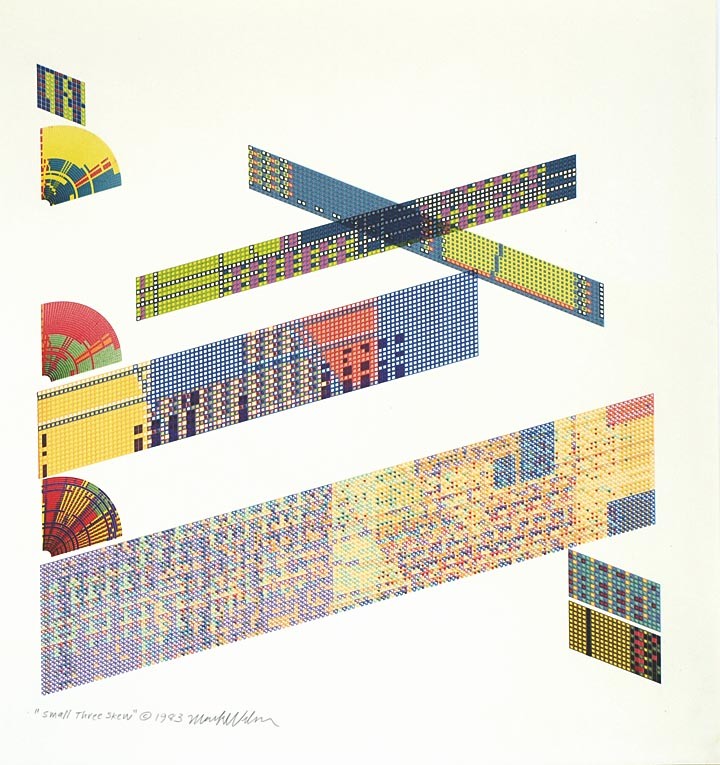 In the 80’ computer generated abstraction grows in complexity. And can be printed in full colors. Many of these artists are still around but in the ‘90s computer art morphed into new media art, and interactivity and social engagement became the main focus for artists working with technology. 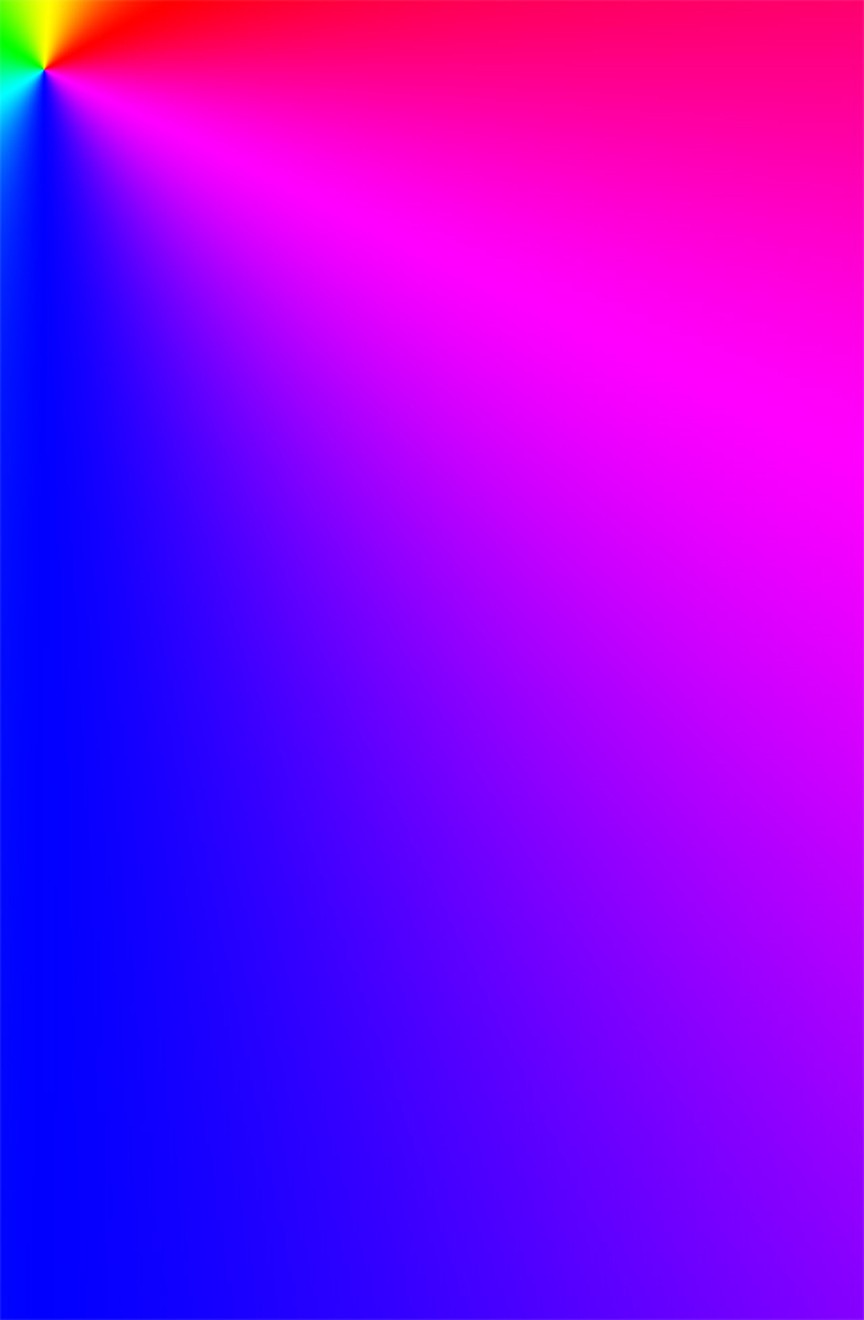 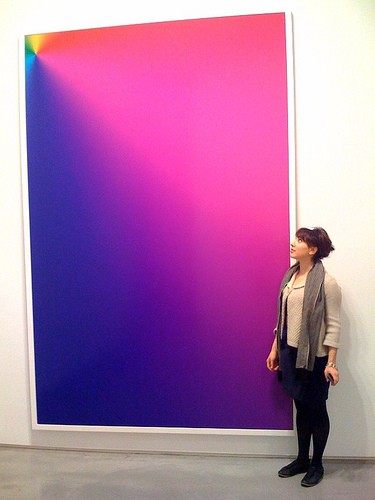