I decided to make a crude version of a wearable synthesizer where capacitive touch sensors were placed without an obvious order relating to the notes. The idea was to have the user search for the notes often not knowing what the next note would be. I felt like this would lead to some unknown and interesting sounding tunes. Another feature of this system is that the scale that is played varies based on the amount of light in the environment. I envisioned a darker sounding harmonic minor sounder scale when it is night time and a happier major scale when it is day time. 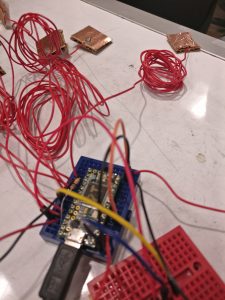 when there is light
when it is night