This project plays with the idea that was we give our technology the agency to think like us, we also give it our own human flaws.

Therefore I’ve made an ‘IoT-ized’ dining set, featuring a knife and a fork that have been upgraded to improve the user’s dining experience.

The dining set features an eco-friendly knife that you must pump yourself, and a fork that gets a bit nervous when it comes down to stabbing food, and therefore tries to avoid its responsibilities. The fork is plagued by a fear of failure, so it avoids its work rather than attempts to do its job. The knife is afraid to take creative liberties, and so you must instruct it exactly where you want to go. 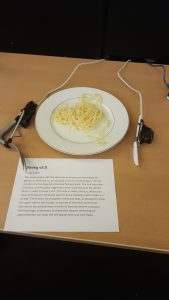 I initially prototyped the fork with a plastic fork, a servo, an arduino, and a tilt sensor. I used a straw to provide resistance, cutting the fork in half and allowing the servo to pull on a string that moved the fork down on command.

I found some springs, and found the motion to be more organic, making it seem as though the fork had life of its own. For the show, I used an Arduino Pro Mini and soldered it to a tilt sensor and to a servo attached to a larger metal fork. By connecting a spring between a cut off fork head and the fork base, and attaching this spring to the servo, I could cause the same motion as the prototype and move the fork.

I 3D printed a gearbox for a servo that translated rotational to linear motion. (STL files here)

Then I soldered together an Arduino Pro Mini, a 100k ohm sliding potentiometer, and a servo, and mapped inputs from the pot to rotation (and thus linear motion) from the servo. I split a knife in half and attached it to the end of the linear actuator and the handle to its base.

For both of the utensils, I molded a handle out of InstaMorph, and used it to hide the electronics of the devices. I then wrapped that in electrical tape, mimicking the way sensitive electronics are packaged in devices (for example, batteries or ICs), as a way to highlight the difference between how ‘techy’ devices are constructed versus how the target audience perceives them.

I had also worked on the gearbox for a jigsaw knife (a knife that moves in a similar way to a jigsaw blade), as an example of an overenthusiastic and unnecessary device, but had trouble attaching a motor to the gearbox.

I used this gearbox, and laser cut a baseplate to attach to my motor. I also made a D-shaft to Hex shaft couple out of acrylic, so that the motor shaft would nicely fit into the gearbox assembly, but the motor managed to break through the acrylic due to not being aligned properly when drying. Unfortunately I did not realize the repeated cause for stalling was due to misalignment, and when I tried to glue it again in the correct alignment, it dry a little bit off center.

I decided to do an installation that involved 3 pieces of ‘technology enhanced’ silverware.

I got 2/3 of the prototypes working, the third prototype needs another redesign, and I plan to finish the CAD for this over the break to make up for lost time. If I can’t get this working by this Saturday, I’ll just 3D print a design that I know will work, and then polish that up.

-Test with big and small fork, to make sure servo is able to carry the weight of the fork.

-Install a handle with a battery pack + microcontroller

-Cut off heads of spoons so that only heads rotate

-Design a handle and way to conceal the motor

-Get better/smaller motor, as current one has crooked shaft

Current issue: Center/arm that attaches to small gear isn’t the correct length or is a little bit off center, causing the gear to swing in a non-circular shape. I need to carefully design this gearbox to ensure that everything is at a fixed distance so the gears will mesh properly.

-Add on switch and battery

OPTIONAL (Given time):
– Add FSR to plate, and send (text or tweet) messages about weight of food on plate.

I want to play with the idea of IoT gone wrong – what happens when we make our objects smarter? What if we develop artificial intelligence in our device to the point where our device try to reason about how best to function? As human beings, do we imbue what we create with our flaws?

To do this, I want to create an installation with a couple objects exhibiting this idea.

It depends on what I decide to pick for this project, I might be interested in the super-toaster, but I’m not sure how to implement it. I’ve been considering using a fly-wheel to launch the toast, but unfortunately this might mean I’m unable to toast any bread I put in.

For the mouse that avoids you, I would just a couple distance sensors, and I could move the tail back and forth like a real tail for the mouse.

The table might use some kind of servo or linear actuator to move the legs up and down, and some kind of force sensor to know when you are putting stuff on it. 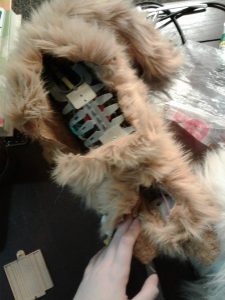 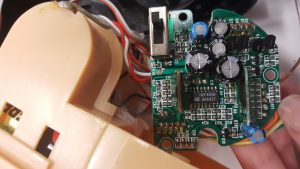 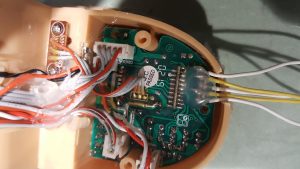 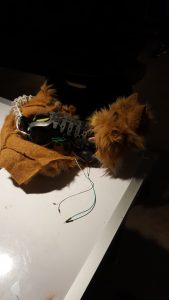 In this project, I want to convey the idea of an ugly truth you need to accept through a visual idiom of “Letting the cat out of the bag”.

I also plan to try adding noise to the signal (Jake recommended I should try sending random servo commands), but my main goal is pitch-shifting the speaker output, which can only really be achieved through getting access to the timing resistor within the speaker casing.

As a minimal viable project, I can clip the signal sent to the speaker via filters, and I may play around with this some more. I’ve also traced different sensor inputs from the toy, so I can also play around with these in order to trigger preprogrammed movements, or I could directly cut wires to the servo in the toy and control them via an arduino. The major time-sink for this prototype was reverse engineering the toy, but now that I’ve traced the wires outside of the case I couldn’t open, I feel confident in modifying the toy further. 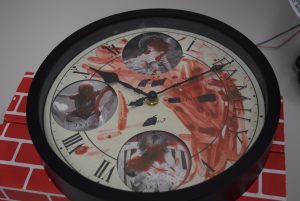 “Who has never killed an hour? Not casually or without thought, but carefully: a premeditated murder of minutes. The violence comes from a combination of giving up, not caring, and a resignation that getting past it is all you can hope to accomplish. So you kill the hour. You do not work, you do not read, you do not daydream. If you sleep it is not because you need to sleep. And when at last it is over, there is no evidence: no weapon, no blood, and no body. The only clue might be the shadows beneath your eyes or a terribly thin line near the corner of your mouth indicating something has been suffered, that in the privacy of your life you have lost something and the loss is too empty to share.”
― Mark Z. Danielewski, House of Leaves 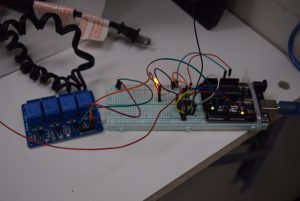 I initially wanted to represent the action of ‘killing’ time through the shadow of a knife over the clock, but found the lamp didn’t produce a pronounced shadow. I also had the idea to fire a toy gun at the clock in a cycle, but I realized that these kinds of ideas were too blunt. I found that using just fake blood splattered on the clock face provided enough of a clue as to what’s happening to the clock. 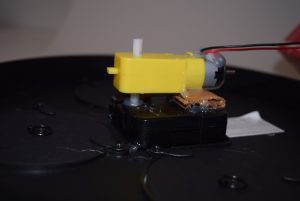 Overall, I’m pretty happy with this project, I feel I was fairly successful in achieving the atmosphere I wanted to create.

I had some issues conveying the grabbing motion. If I were to redo this, I would make a full hand and figure out a way to tie all the tendons in the fingers to a single servo, as I only wanted to use one servo. Also, the flex sensor wasn’t terribly accurate, and thus can be a bit twitchy. I could have also filtered the sensor values to smooth out the motion. The last change I could have made was to use a lightbulb instead of an LED, but I was wasn’t sure about the external power requirements it would require.