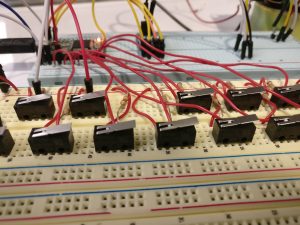 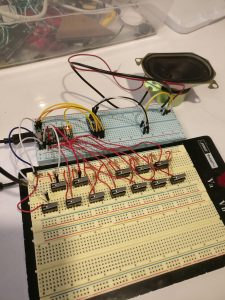 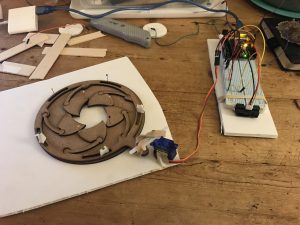 An hourglass that resembles how time is passing in its environment. The speed of sand falling depends on how much movement occurs around it.

Sketches are developed that outline the overall form of the hourglass, including how the technology will be embedded in the form. I used a previously made model of a laser cut aperture to change the amount of sand that will potentially flow through. I still need to add another cover for the lens so the pieces do not fall out, especially when the hourglass is flipped. I also need to solidify how the tech will be securely (drilled?) into the wooden casing. I am also considering adding another variable (ex. sound) to control how the sand will fall (not sure if it will get too complicated if I want to affect how the sand falls, rather than just the amount of sand falling).

Pulse Sensor: The pulse sensor used the code from Pulsesensor.com but the threshold was set at 550, while the readings from the pulse sensor ranged from 900 to 10, since there was much noise. Even if someone’s hand was close but not on the sensor, a “pulse” was detected. To prevent the lights from pulsing when there was only noise and no real pulse, I included another pulseSwitch, a momentary switch that had to be activated, in addition to the corruptSwitch being inactive.

Getting Corrupt Mode (corruptSwitch == LOW)  to stay red: I have some trouble writing the code to exit the loop and end with the LEDs staying in the red state. I tried using booleans and conditionals but can not seem to get it right.

The circuitry has been completed for this project but the code could use some tweaks.

For the rough crit I have a cardboard prototype of my interactive mechanical flower. Currently it has two axes of motion: 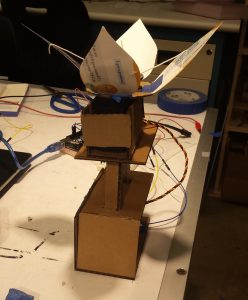 Overall, I’ve gotten down the basic range of motion I was going for. However, the motor is too slow even with increased voltage so the raise/lower motion is not very noticeable (in the video, it’s very slowly rising) and a faster motor wasn’t strong enough to carry the weight. I also don’t really like the way the motion looks. Because of this I am considering removing the linear actuator part and focusing on interaction with just the flower.

In this rough crit, I aimed to create my minimum viable product and prototype for the Braille Tutor.

The idea is to help in the adjustment-to-blindness training programs to allow “adults who originally learned to read print but lost their sight later in life” to learn braille. 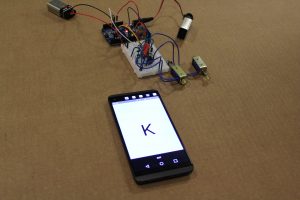 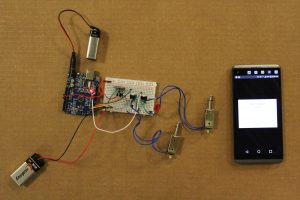 My braille system consists of a braille pad, that is an Arduino controlled six solenoid pin arrangement that creates one braille letter at a time. The system also consists of a companion android app that pairs with the braille pad to conduct lessons for the user to familiarize themselves with braille. 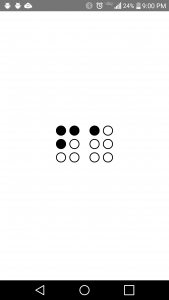 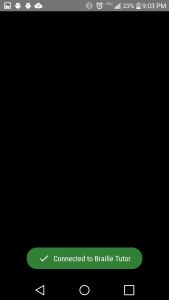 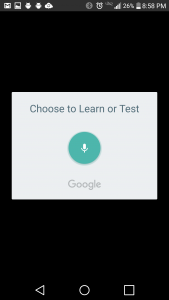 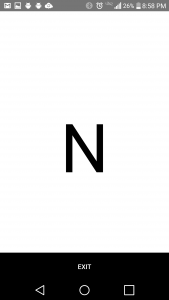 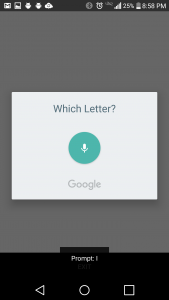 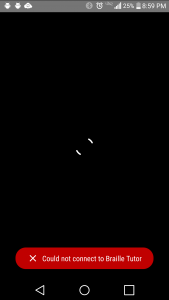 The prototype, for purposes of the rough crit, consists of two solenoid pins controlled by an Arduino that pairs to my companion android app. The prototype does full justice to the proof of concept. I could achieve harmonic communication between the android app and Arduino and synchronously generate alphabets in conjunction with the two braille pins simulating the actuation of the corresponding braille translation of the alphabet.

The first lesson learn, displays an alphabet on the android screen and speaks it out. This is then communicated to the Arduino which actuates the pins (in the final version, I will have the rest of the four pins) in a 3D printed casing.

The second lesson generates a braille alphabet on the braille pad and asks the user to identify it.

I have more ideas for several lessons/braille dictionaries for the app. The final product will simply include these lessons and the rest of the four pins, enclosed in a professional casing. 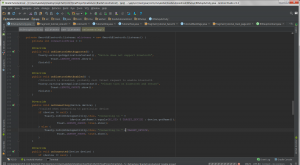 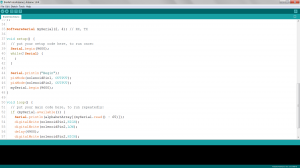 The issues I will face are those related to power. Six solenoid pins are going to be using a lot of power and I need to find a way to make this more power efficient.

To re-iterate the project intention:

The intention of this project is to develop a children’s soft good that serves as a grounding mechanism for young children who are overly anxious. Grounding mechanisms are used to manage anxiety by creating a movement or feeling to anchor someone back to the environment.

I am using a pulse-sensor and speaker for this project at the moment- I became interested in the tangible movement the speaker generates when electricity runs periodically through it and used it as the output for the pulse readings.

Overall, this checkpoint was a success in getting a basic program and functionality to work. I experienced a few problems reading the pulse sensor as the data is overly sensitive and am still working on making this more fluid. I am also experiencing a slight inconsistency with the beating- this is likely due to code troubles which will need a bit more time debugging.

Next steps after cleaning the program and establishing something more robust would be to start housing the electronics and placing it inside a stuffed creature. I am unsure if I will be purchasing a stuffed animal at the time or creating my own- I’d like to first define where to place the pulse sensor that would be most effective. 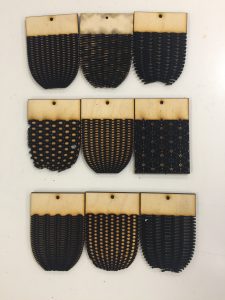 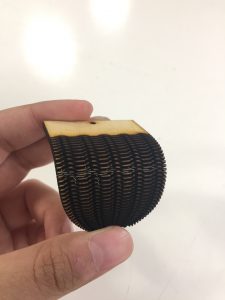 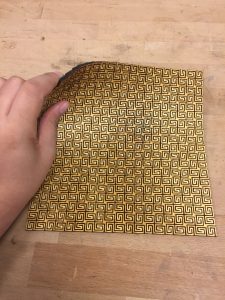 Smart Cup can currently do two things:
1. Tell if your cup is ready to drink; 2. Animates if you are drinkingTo achieve these tasks, my product has 3 component: a NeoPixel (8mm), a potentiometer, and a tilt sensor.

So I transferred everything to a smaller-sized breadboard, which allows my control rod to point upward. 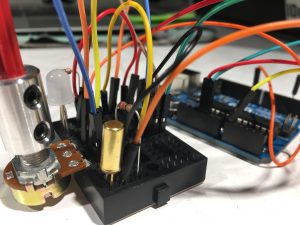 4. Adafruit Gemma/ Teensyduino not working with Arduino
Now that I can fit the breadboard into the cup, I need to fit the arduino control in the cup as well.  I first tried Adafruit Gemma and got through the installation process. Unfortunately, the port cannot be recognized by my arduino. 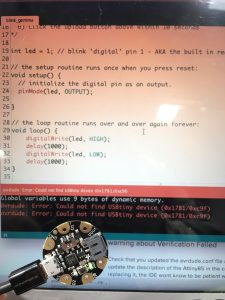 Next I am going to try teensyduino. This will be the next step of my project.

Coming up, I am thinking about incorporating the following things:
1. temperature sensor
2. battery-powered
3. Proximity sensor: if there is the couple cup is nearby, the cup does something
4. Add customization