My final project is a cosplay prop from the game Transistor, that uses phys comp fundamentals to bring the prop closer to functions/behaviors in its original work, enhance static features, and bring others to engage with the great works that these props come from. 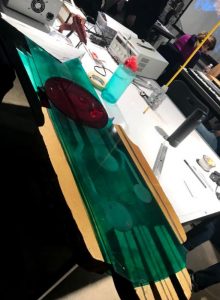 The first stage was focused on code and learning more about using physical computing components like transistors and capacitors to deliver consistent power to the circuit and read noisy signals. High pass filter methods were used to find the most effective way to read and pulse the LED with. Different conditional loops and commands such as “return”, “goto’ and “switchCase” were also explored to achieve the conditional cases I wanted to program for:

Corrupt Mode: When the sword is lowered from the stand, sword point touches the group and pressed a momentary switch down. The switch reads LOW because the circuit moves voltage from 5 V to ground. The switch is connected to a pin and the Arduino executes a command to fade from blue to red LED strip color, and stay within the red state while the button is pressed.

Push buttons are used in conjunction with if statements.

Booleans and return functions were considered as ways to control when the pulse sensors was activated and taking in inputs, but a momentary switch was the better option because it was a mechanical switch not dependent on the code for the pulse sensor to avoid reading noise. 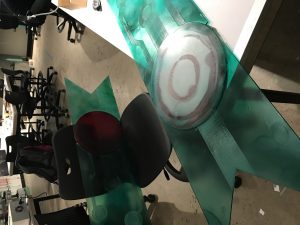 Much of the difficulty was with prototyping outside of a breadboard- soldering with large lengths of wire and attaching buttons in the absense of pre-existing holes created a building difficulty. The pulse maker has to be strong through the silver hilt, which was not formerly anticipated. I also had a lot of difficulty with making a pushbutton work that did not have 4 prongs (2 prongs only).