Initially my idea was to create a text to speech keyboard in order to give the anyone with fingers the ability to speak. I found libraries that worked for this, as well as the speaker and power components  I struggled with the keyboard part of the project. After researching online I thought I would be able to use an old school ps/2 connector keyboard with a library I found but I struggled with making the connection perfect with the pins. So I bought a piece online that would do this for me. When it arrived, I tried to get it to work the same way I saw it done online but finally gave up after some fruitless time debugging as well as seeing a few people online with the same issue (never being able to see power in the keyboard) and no known solution. 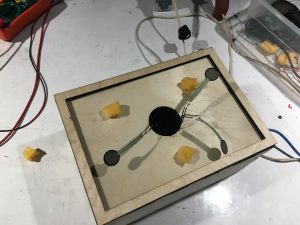 Then I was able to use the varying sensor values for when the user pushed down in 7 different spots to get 7 different “keys” from the 3 sensors while still being able to know where the user is pressing. Since the mid point I added volume to the speaker with a LM386 audio amplifier as well replacing the power so the circuit could be plugged directly into a wall outlet.

The last touch which was something I had never done before was lazer cutting the box that I put everything inside of. I from an online box-generating site where I entered the dimensions and it gave me a .svg file. I then used illustrator to add the additional circles I wanted cut in certain walls for the speaker and wiring and export the file to use on the lazer cutter.