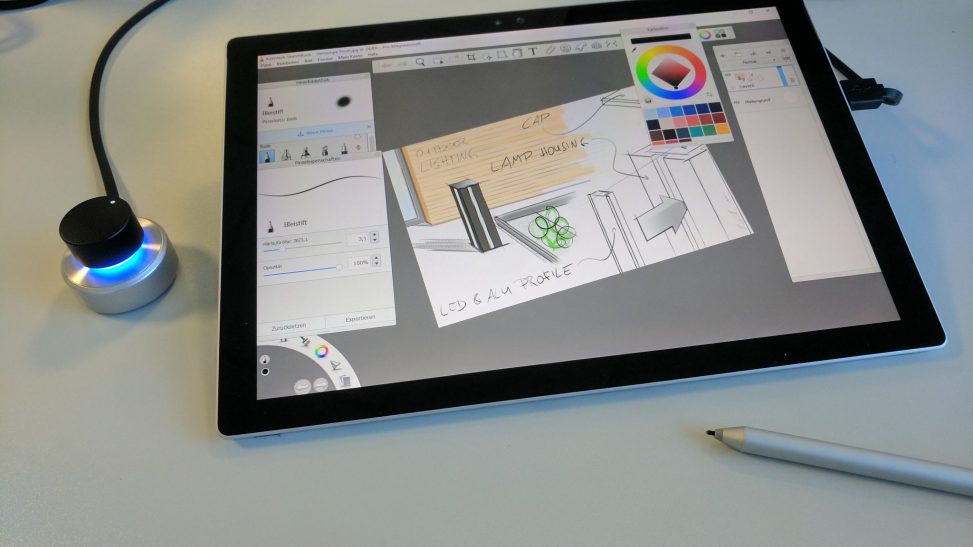 Link to project on hackster.io

Created by Benni of Tinker-Fun

This button features a rotary encoder with programmable interactions for shortcuts to be used in conjunction with drawing applications (Autodesk Sketchbook, others). With interactions such as rotating the knob and single- or double-pressing it like a button, features like rotating a canvas, changing brush size, swapping tools, and undoing options are more easily accessible. This eliminates the complexity of a keyboard so that the user can focus on drawing, keeping a pen or stylus in one hand and manipulating the workspace through the shortcut button with another.

Rotary encoders have long been used as a means of control in human-computer interactions, including the scroll wheel on a mouse and a control dial on a digital camera. In recent years, products such as the Microsoft Surface Dial (which inspired this project) have surfaced on the market to accomplish the kinds of tasks the “Teensy USB Shortcut Button” is designed to perform. Whereas the Surface Dial is a more refined product with excellent build quality and finishes, it also has an MSRP of $100 and is proprietary to the MS Surface line of products. In contrast, this project costs a fraction of $100 to assemble, is open-source, and can be configured across a wide variety of systems.

The most immediate improvement to the project after fit and finish would be to integrate wireless function. Since it communicates over USB, a possibility would be to add a wireless USB chip that pairs with a receiver or to switch the protocol to Bluetooth. Other ideas of possible interest include tying LED color, brightness, and position to the function currently in use and adding greater nuance in control with directional nudging (think a d-pad) or movement of the control itself.

The reason I chose this project is that possibilities for rotary encoders, in conjunction with physical and software controls, open a wide range of innovative new interfaces. For example, smartwatches such as the Apple Watch and Samsung Galaxy Watch use different types of rotary encoders (the Digital Crown and dial, respectively) in combinations with other physical and software controls in order to solve the problem of interacting with content on such a small display. Other possible interactions include building larger, more tactile knobs that interface with computers or smartphones, improving efficiency in specialized tasks or accessibility for those with limited motor function. With a well-crafted hardware control in conjunction with thoughtfully-designed software, the relationship of directly manipulating something digital with a tactile knob has potential to increase the satisfaction of the interaction.