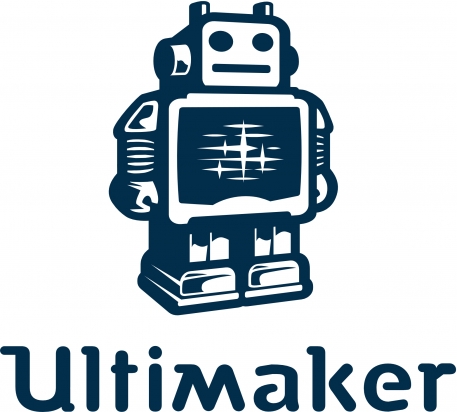 This is a set of sensors to notify the IDeATe Tech Advisors when an Ultimaker 3 printer is low on one or both of its filaments.

Ultimately, it will reside in the 3D printing room in the back of Hunt A5.

The first point at which I had to make a major decision was in figuring out whether or not I would incorporate sensors for both filaments. For context, the Ultimaker 3 can use 2 filaments when printing. The first is often the build material, which is typically either:

The second is often a support material, which is typically either:

Ideally, I would want to include sensors with both, but it turns out that PVA is transparent to infrared. Since the break-beam sensors I planned to use operated with infrared LEDs, they would work fine with the build materials, but not with PVA. They wouldn’t see the strand of PVA. At this point, I either would have needed to make a custom sensor that uses a regular LED and a photoresistor, or order a break-beam sensor that uses visible light. When I am able to return to this project, chances are high that I will just order some sensors that use visible light. 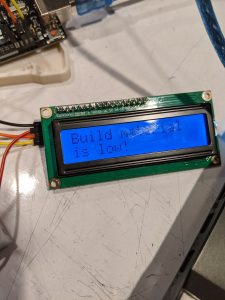 When the build material is low (not triggering the break-beam sensor), the screen will same something like this. 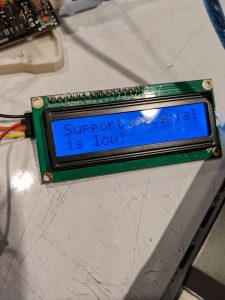 The same goes for the support material. 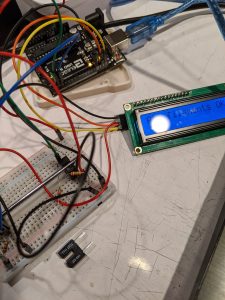 Here’s what is displayed when all filaments are OK. At this point, I was triggering the sensors with a screwdriver.

Another decision I had to make came as the deadline for the critique was fast approaching. I could either wire up one set of sensors and hopefully have that fully functioning, or try to wire all 4 sets up. This was ultimately my downfall. I never truly made a decision one way or the other, so the result was a severely underdeveloped device that barely worked. The 1 sensor that was wired up didn’t work at the time of critique due to faulty soldering on my part. Then again, this is what happens when you rush.

I was relieved that those critiquing my underdeveloped device at least gave me constructive feedback and pointed out the good things about the project. Quite obviously, however, it was a far cry from faultless. Given the state the device was in, I can see why one critic said this:

“Would it have been easier and prone to less error if you made 4 seperate detectors? Then if something goes wrong, you would only need to fix 1 of the printers instead of putting all four sensors off-line.”

While I do agree that it would likely be easier to have 4 separate detectors for the sake of serviceability, it is a little bit wasteful when all 4 detectors could be driven off of 1 Arduino Uno R3 (or a Photon, more on that later).

Another critic said this:

“The project sounds very sophisticated and pretty useful for your job. However, how can you make it be more straightforward for the next users to use that have your job? Make it easier to understand?”

I think the reason it is so difficult to understand is because of how unfinished it is. Once the device is actually finished (hopefully this will be shortly after the COVID-19 pandemic dies down), it should make a lot more sense.

With all of that said, I am quite unhappy with how the project turned out. However, the issues that it has almost entirely trace back to me. In particular, my indecision was my biggest problem, and it led me to waste a lot of time. I think it goes without saying that I did not satisfy my goals for the project.

One truly bone-headed decision I made was using individual wires for each of the pins, rather than being smart and following RZach’s suggestion of using multi-core wire. It would have been the same level of difficulty in terms of soldering, but the external wiring would have been much cleaner. With that in mind, when I am finally able to resume work on this device, the sensors will all use multi-core wire where applicable. Everything will also be wired into a protoboard, rather than a breadboard, so as to make the device more permanent.

One final thing to note when continuing this project is that it will likely be ported to work with a Particle Photon (suggested by Cody Soska and RZach). This will enable me to use IFTTT (if-this-then-that) more easily so that I can have the device send a Slack message to IDeATe staff (Tech Advisors in particular) saying which printer is low on filament and which filament it’s low on. It’s possible to do this with an Arduino, but much easier with a Photon.

NOTE: The code you are about to see is very unfinished. That said, it does compile, and it properly reads the sensors (when they’re wired correctly). Once I am able to wire the device up correctly, I will update this post with revised code, both for the final Arduino version, as well as the Photon version. Regardless, here’s the code as it was during critique:

Unlike the code, the schematic for this device shouldn’t change too much, even when transitioning from an Arduino Uno R3 to a Particle Photon — some pin numbers may change, but that’s about it. This was made using Fritzing.

All four sets of sensors are wired up identically.