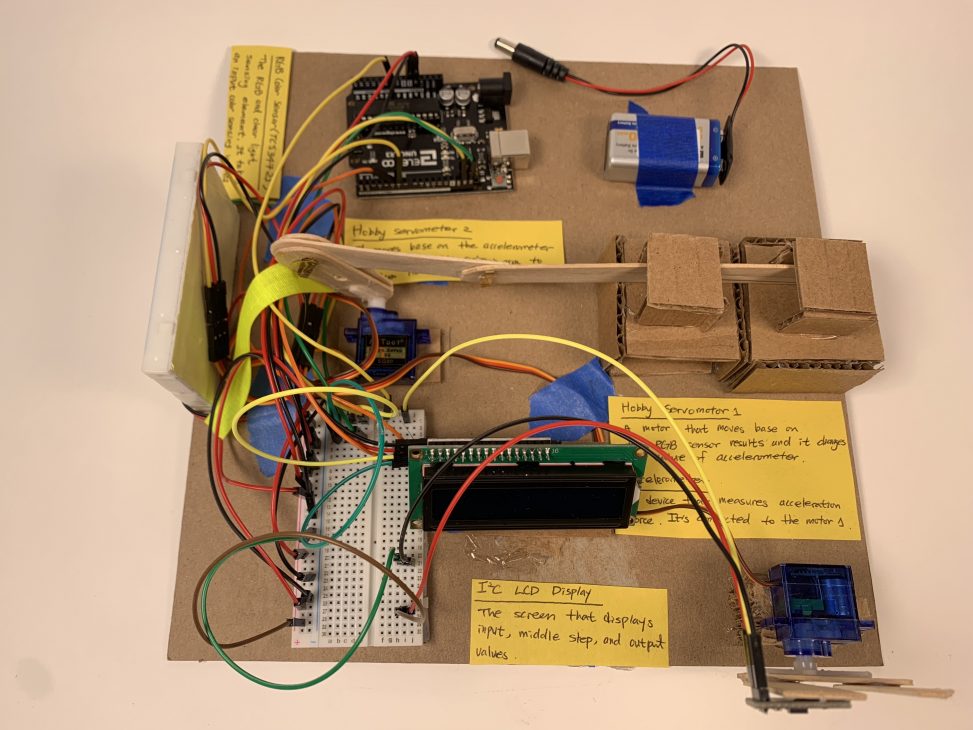 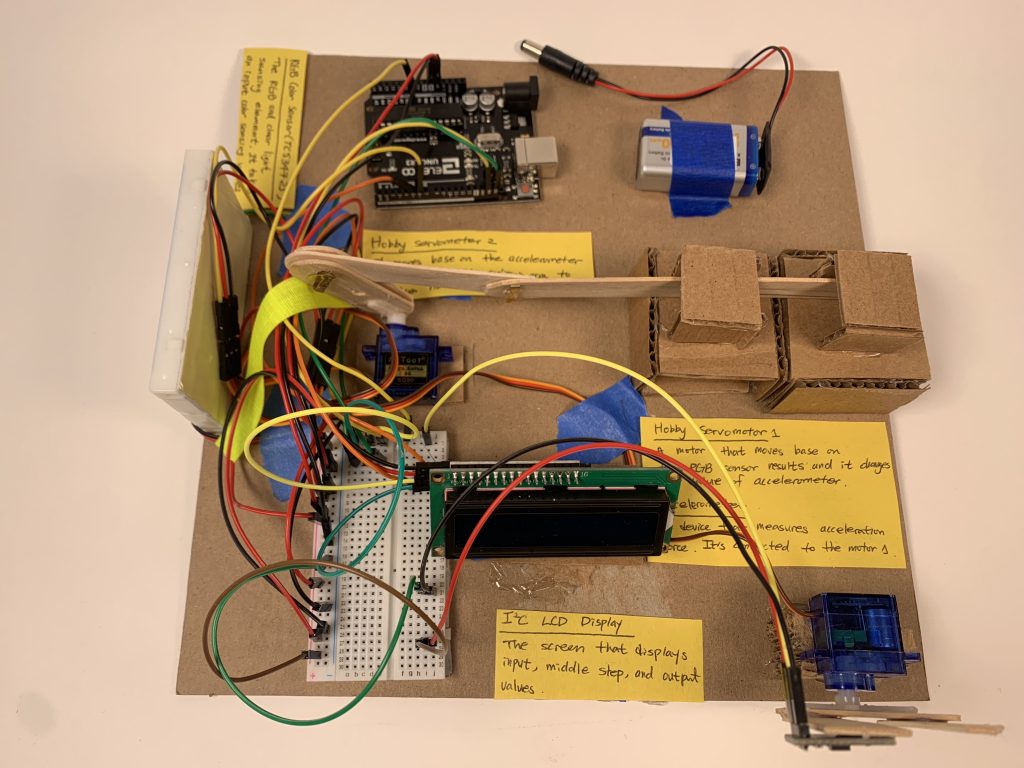 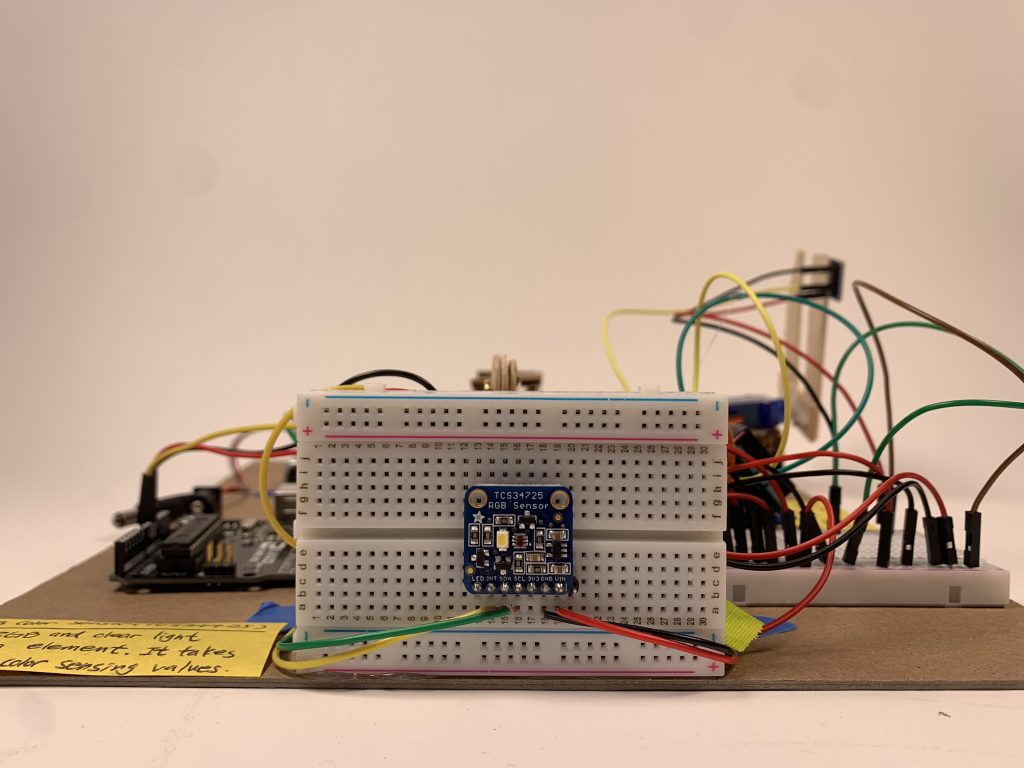 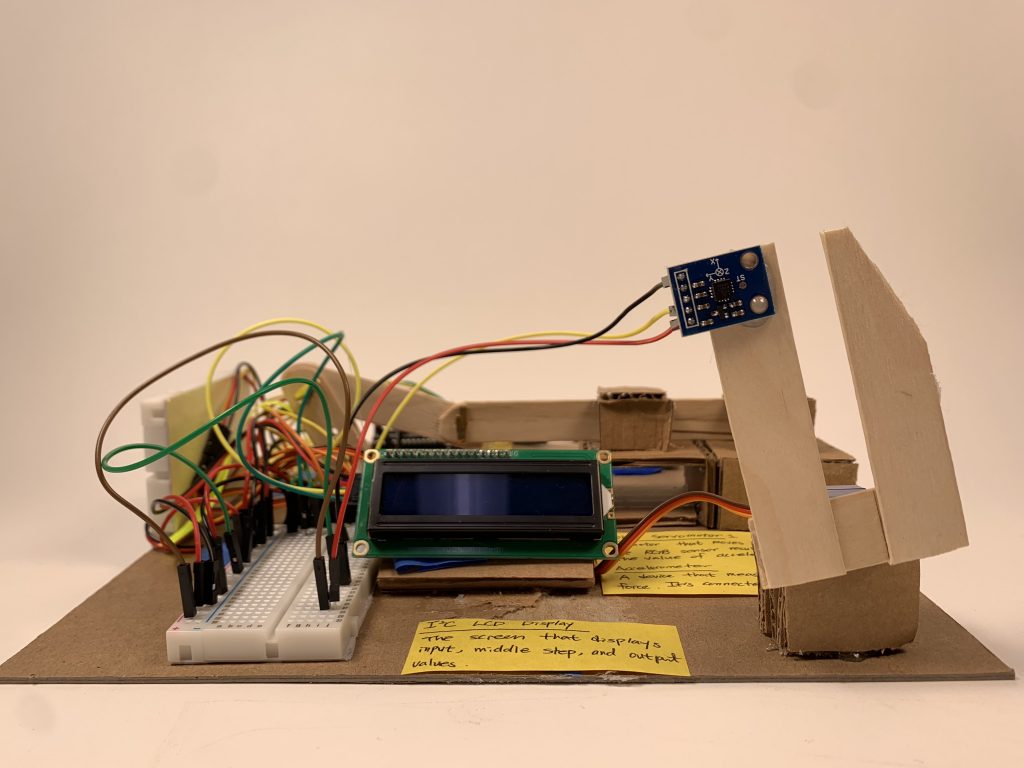 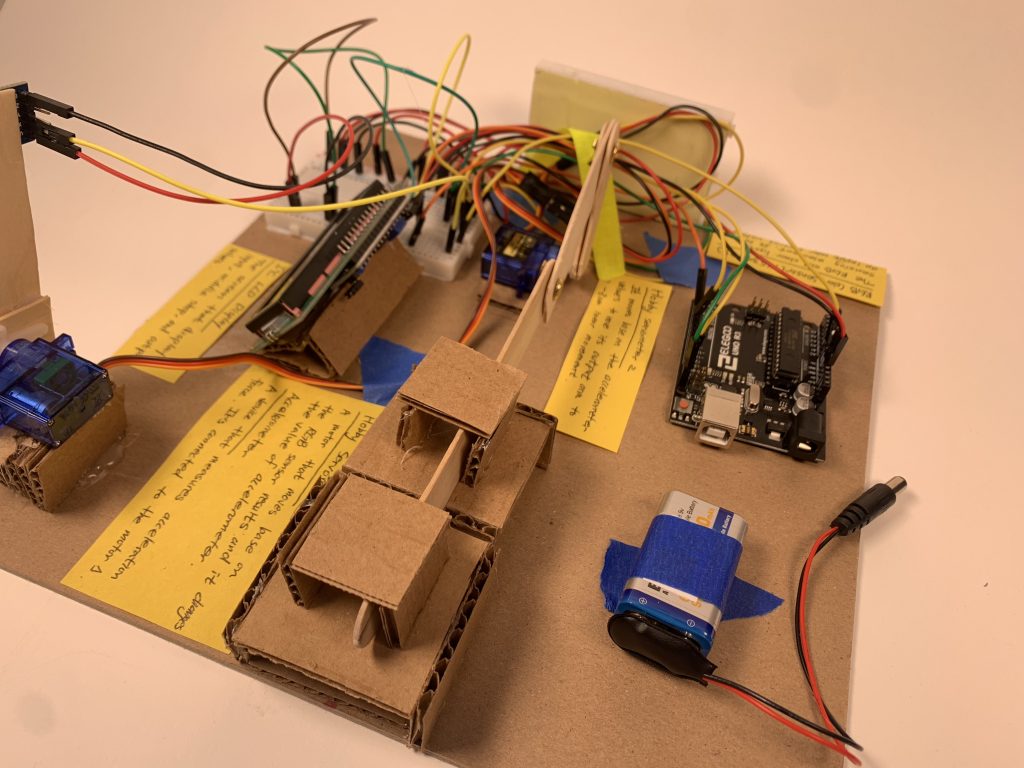 Output: an popsicle arm that moves forward when the servo motor rotates

The most important part of this project was in communication with other teams. To make our double transducer work transducer to transducer, we did some experiments by setting each sensor results to specific values in an Arduino. For an input color sensor specifically, we used different colors of objects to give different signals to a color sensor. While it worked internally, because we are getting input from the previous team’s output, we needed to communicate with other teams and test our model to theirs. Since we were the last team, we met up with the previous team and tested our color sensor. Throughout this process, we learned communication not only within a team but also among multiple working units is critical especially in a big project.

One of the challenging parts was the final ‘linear’ movement. We first started off with popsicle sticks with their original length to see how it works; however, it, first, makes circular movements, and, second, moved too much which was not appropriate to the given board size. We did some experiments to find proper lengths of popsicle sticks corresponding to the board size, and found out shorter popsicle sticks make smoother and more gradual movements. However, it still did not make a perfectly linear movement, so we built cardboard houses that fasten a popsicle stick. Before building the linear movement structure, we calculated the lengths and degrees, but it unexpectedly did not turn out that way. Throughout the multiple problem-solving processes we ended up having the model we wanted, which was different from what we first designed. We realized there always can be differences between calculations and the actual executions.

As for the middle part, we originally decided to use a joystick and popsicles to move the joystick. However, we found out that the joystick tends to latch on to the middle or the two ends, and it is very hard to make it stay in the middle. With a backup plan during our idea session, we made the motor rotates an accelerometer instead, which turned out to be successful. We learned that we should always consider alternatives in case our plan fails, and if something doesn’t work, we should not dwell on it but should look for different solutions. 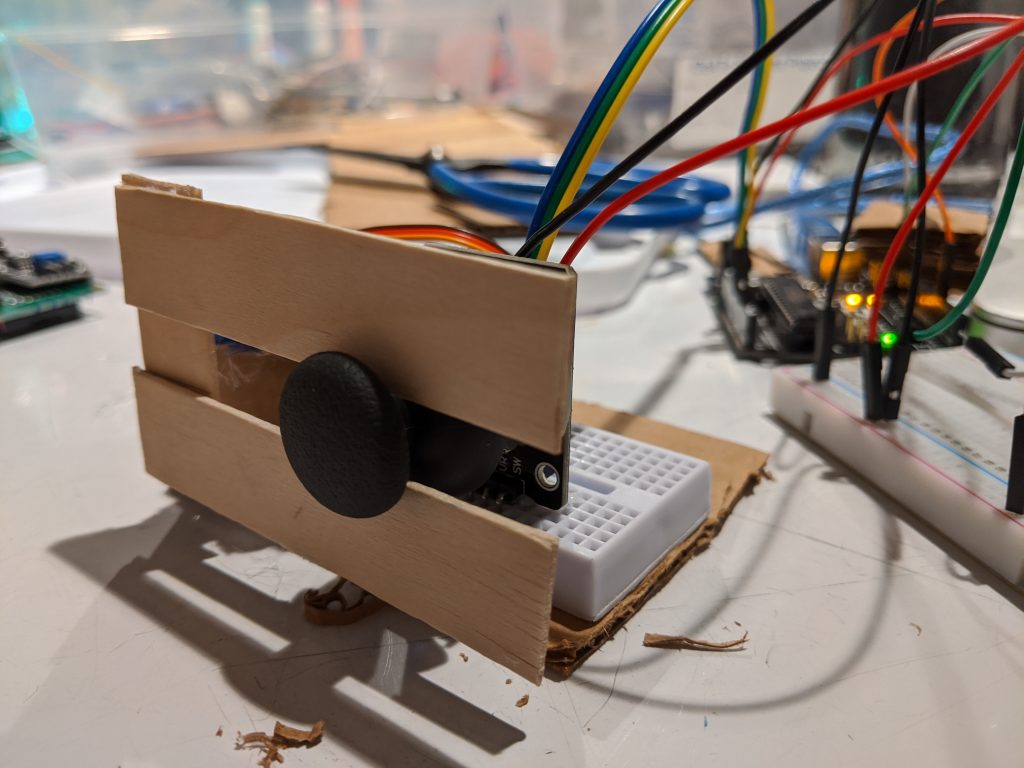 Originally we planned to use a joystick for our middle step, but we had difficulties making it stay in the middle, so we switched to an accelerometer instead. 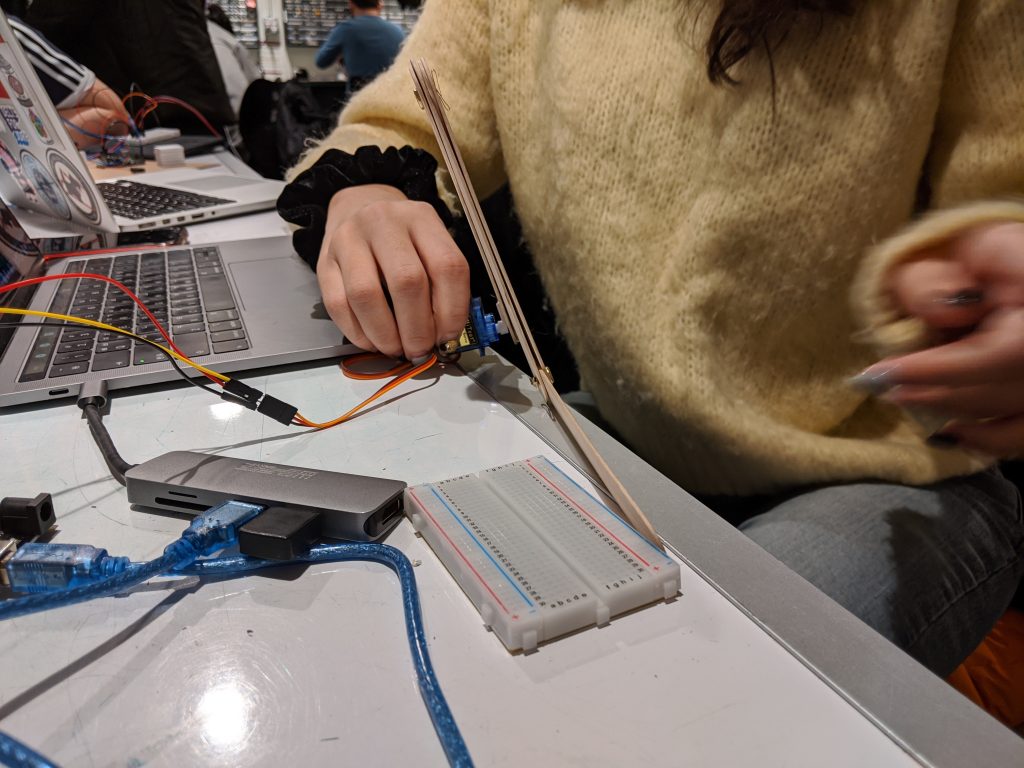 Planning the mechanism for converting motor rotation into linear movement. We realized a popsicle stick attached to the motor is too long. 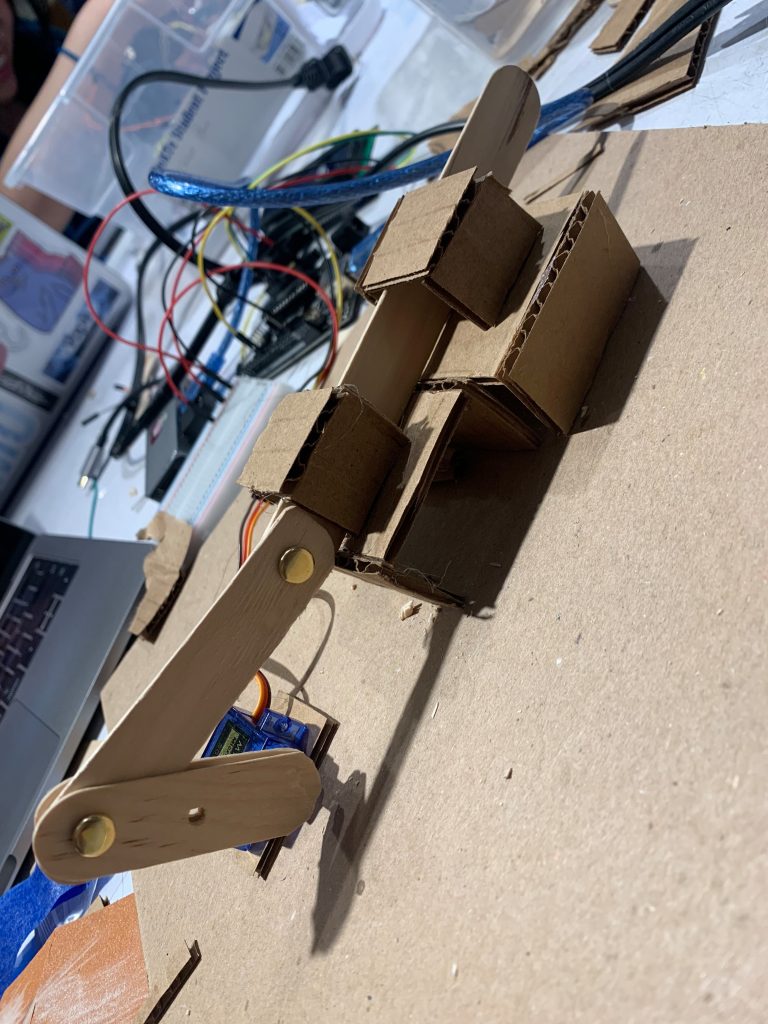 Near-finished product for our output. We decided to make cardboard “houses” to hold the popsicle stick in place. 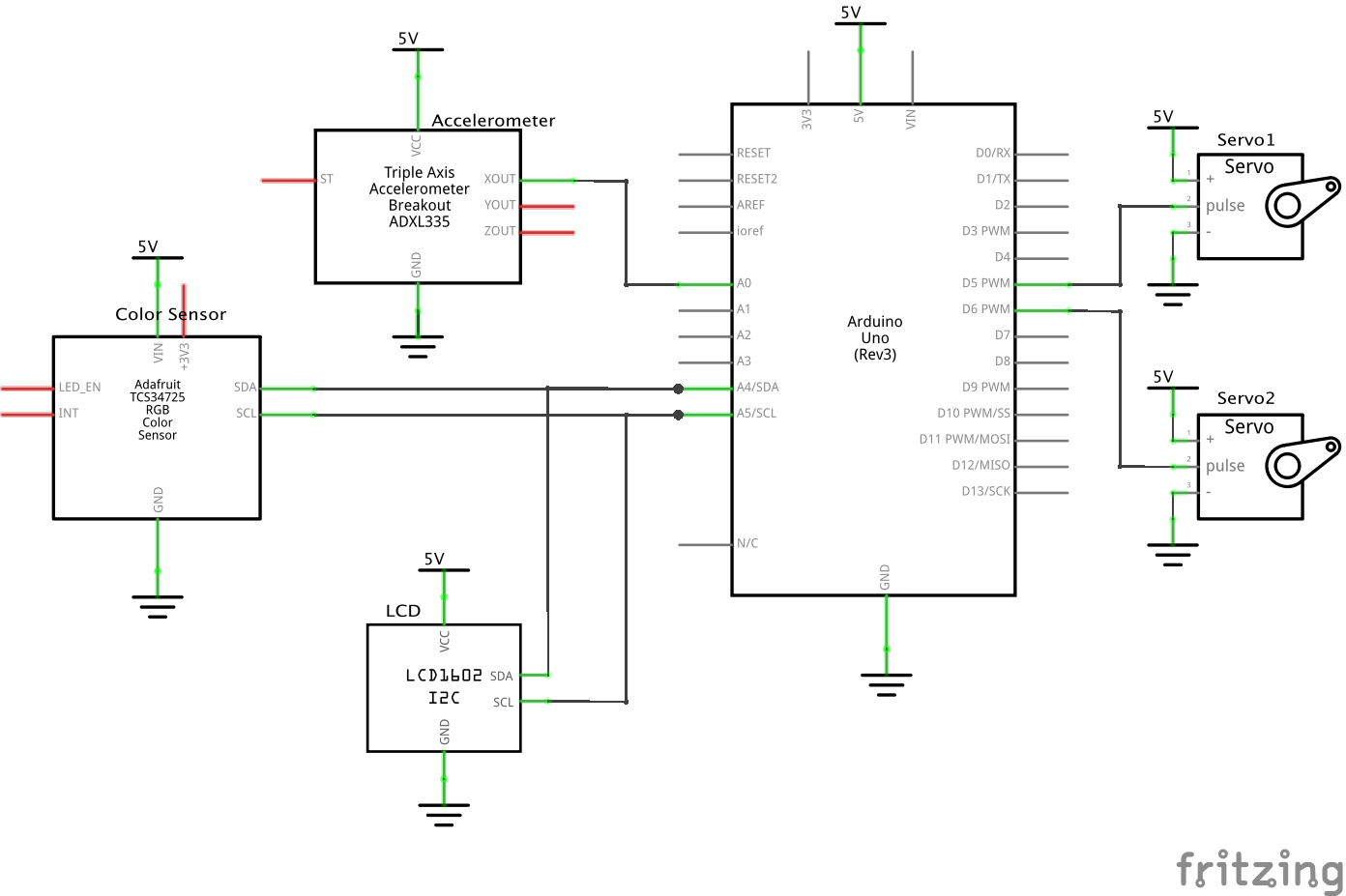