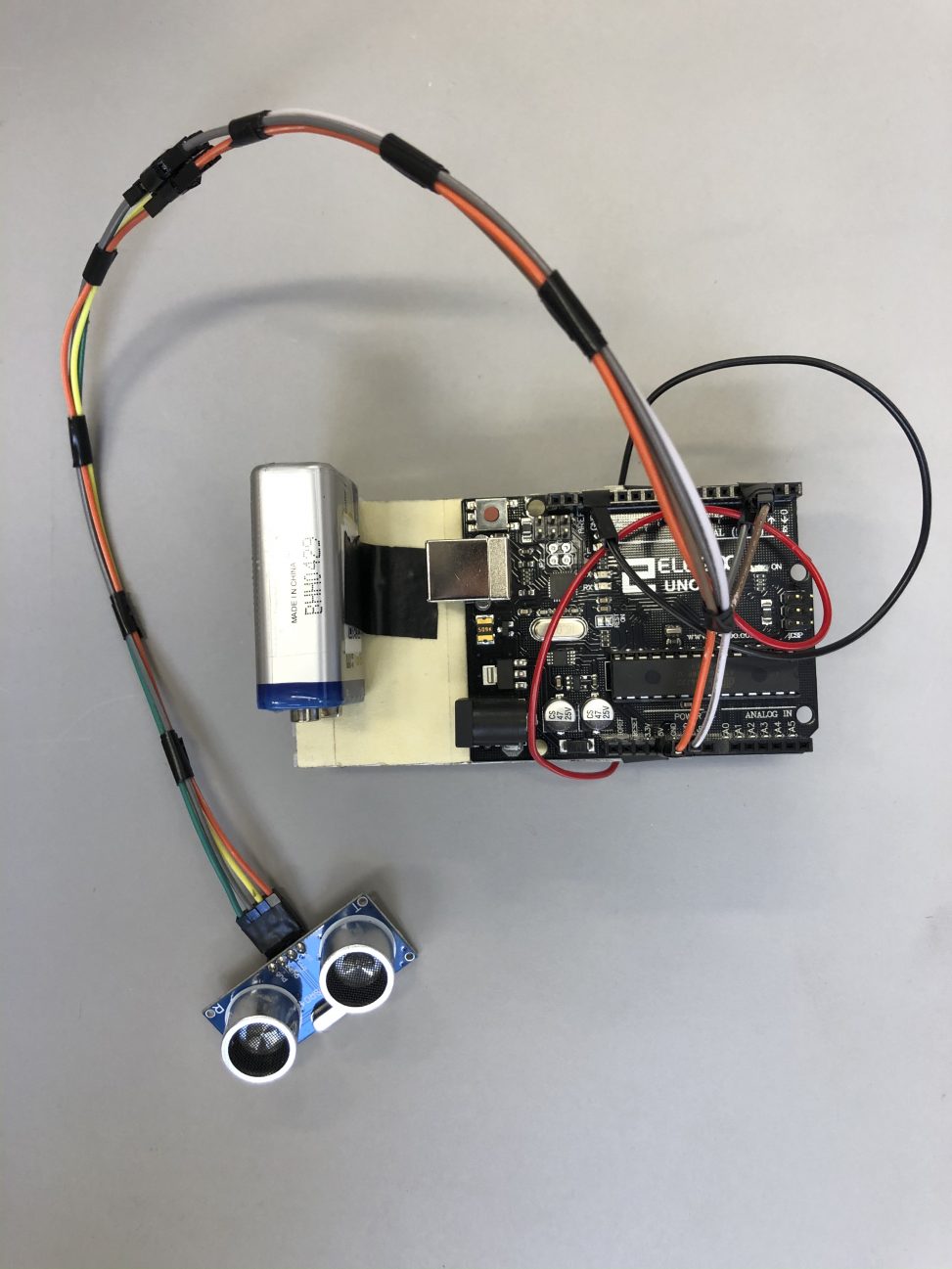 [Final Images and Video Not Available – the device is currently in Pittsburgh and I am not available to take a proper image of the final product.]

The Bug Eye Alert is an assistive device that will alarm the users with a sound every time they are 35 centimeters or closer to a computer screen.

The two major decision points in my progress that impacted the end result of my project was during the ideation and trial stage, deciding on what sensor and mechanics to use to progress through the project, as well as experimentation on speakers and resistors.

At the start of the project, I thought to use a magnet and magnetic sensor to detect the distance between the user and the computer screen. The idea here was to attach a magnet to my glasses and the sensor to the computer screen. Instead, I was suggested to try using different IR sensors. I decided to try out three different sensors SHARP Infrared Proximity Sensor, Micro SHARP IR Reflective Sensor, and Ultrasonic IR Sensor.

From the aesthetic point of view, I leaned more towards the SHARP Infrared Proximity Sensor and the Ultrasonic IR Sensor since I already had a design in mind. I tried out the SHARP Infrared Proximity Sensor at first to see if I could figure out the coding. I did some research and came across a code and I tweaked it to fit the model of the sensor I was using. However, I came across multiple code errors that I couldn’t figure out. 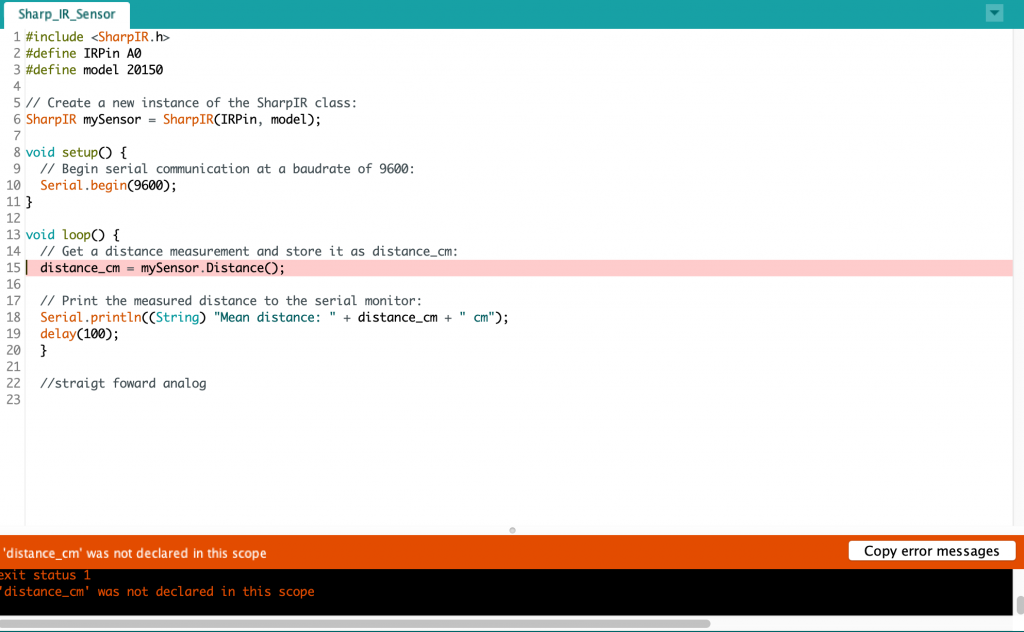 That said, I tried out the Ultrasonic IR Sensor and was able to figure out the coding and the proper readings from the sensor. This led me to stick with using the Ultrasonic Sensor as the device to measure the distance of the user to the screen. From then on I had to figure out the measurements and how the device would be attached to the computer and figure out a way to extend the wires without damaging the Arduino and the sensor in addition to figuring out how to cover up the wires. 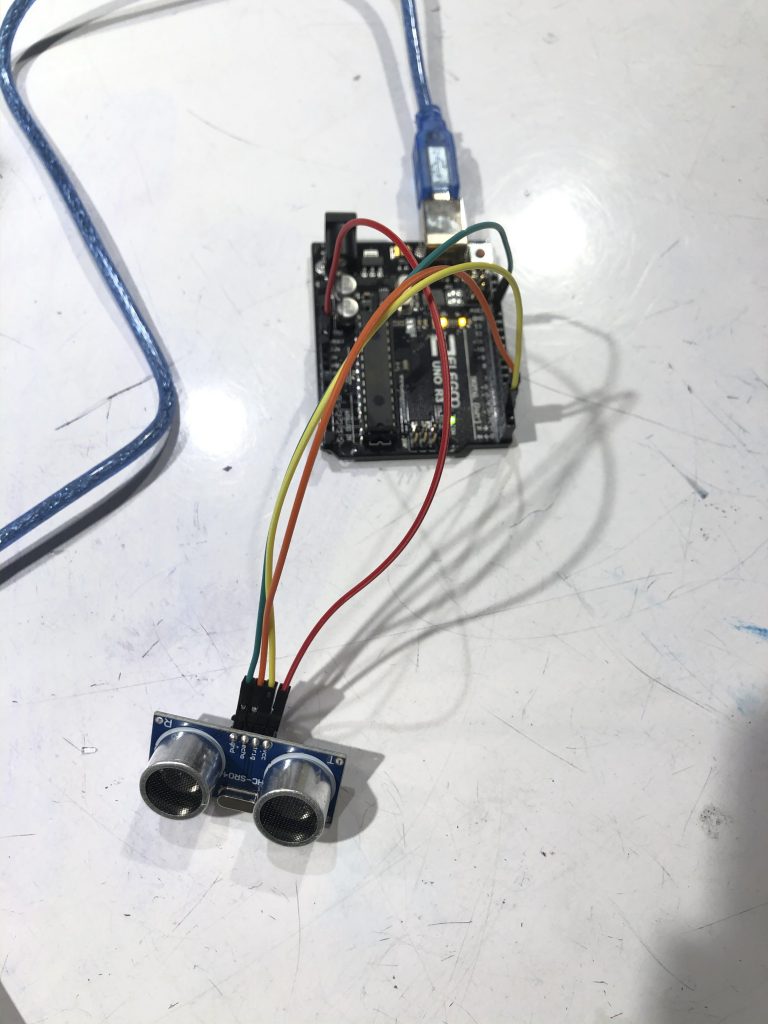 The decision to use Ultrasonic: HC-SR04 sensor instead of SHARP IR Sensor

I also wanted to add another component to the device that would alert the user if they were too close to the screen. My instinct was to use a loud enough speaker with an alarming noise that would make the users be aware of themselves, as well as be constantly aware of the consequences of coming too close to the screen. Since this device was assisting my habit and I knew myself the most I felt that it was appropriate to use a speaker to alert me instead of lights and a subtle alerting system.

For the coding portion of the sound, I tried two options: one toned beep and multiple notes “song.” I first tried out the multiple notes and saw if it fit the intentions I was going for.  The trial of the multiple not alert seemed too quiet and pleasant in my opinion so I decided to use a louder one toned beep for a sudden abrupt alerting system that halted the user, me, from getting too close to the computer screen. 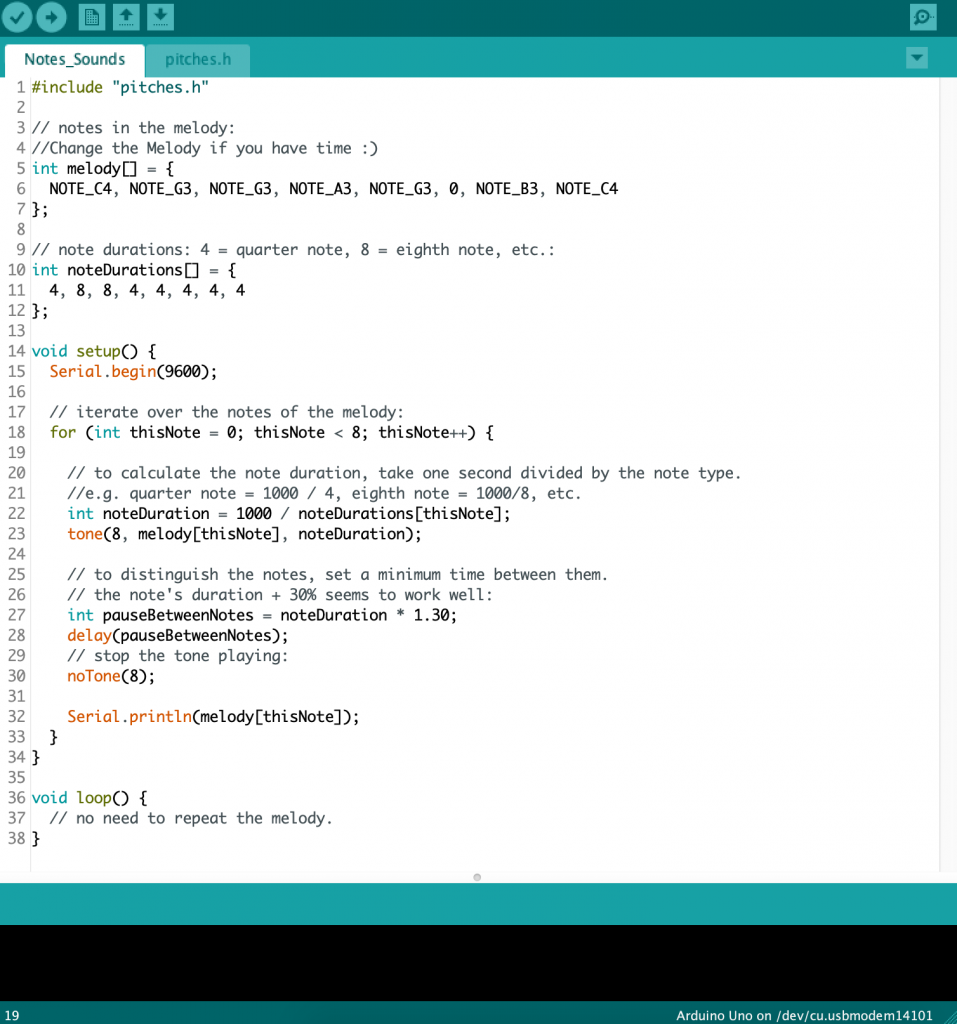 I tried out two different speakers: Mini Speaker and Single Pole Speaker. I first used the mini speaker as a trial to see how the notes each sounded, but with Zach’s suggestion, I switched to the Single Pole Speaker which gave me more flexibility in how I position it, while also giving my project more structure. 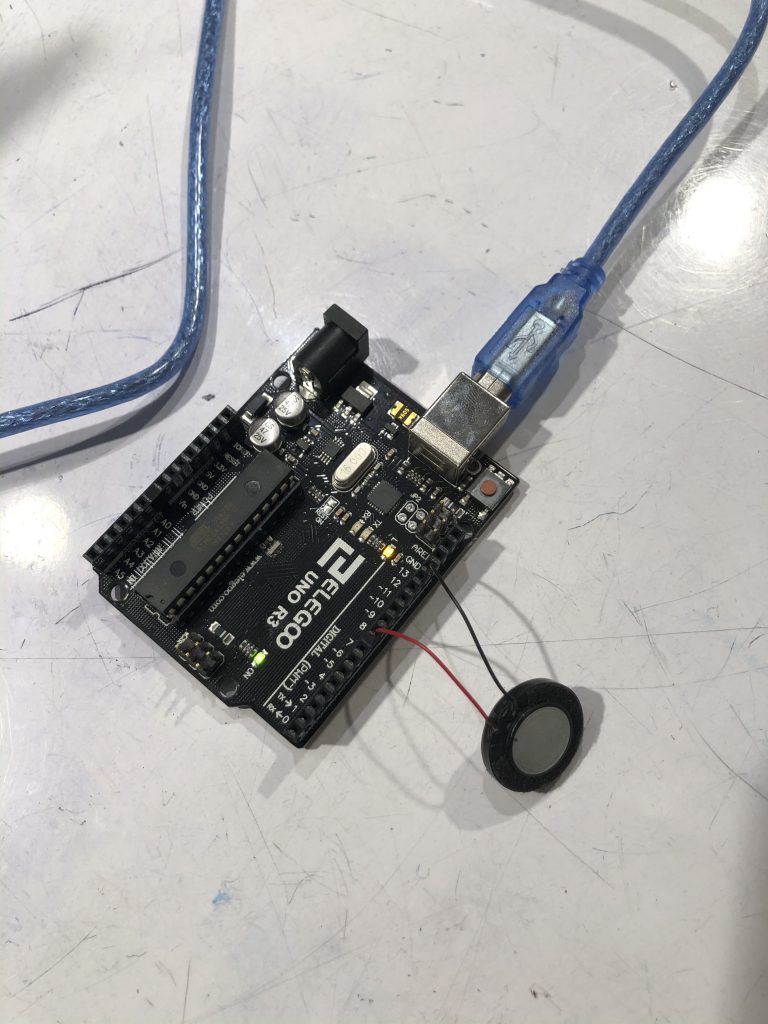 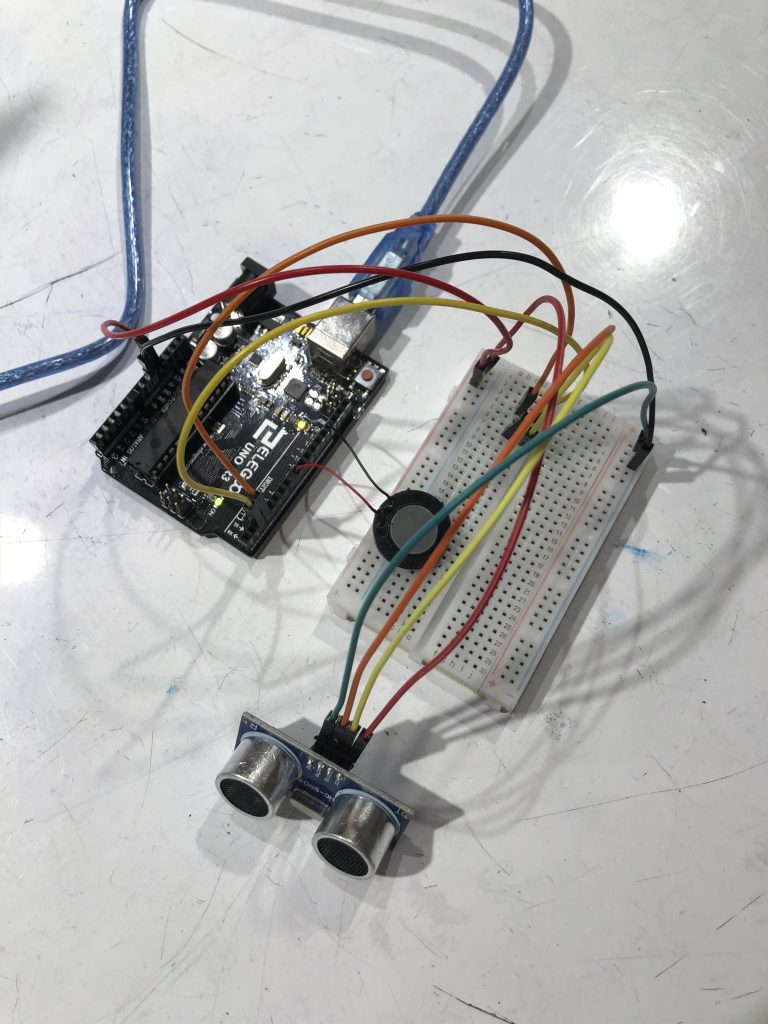 Deciding to use the Single Pole Speaker, I tried out a few different transistors and resistors to get the loudness I wanted. I tried the transistors (ULN2803 transistor) initially because I thought the speaker would be soft, however, once I tried to use the transistor to bring up the volume, it was too loud. That led me to try out different resistors to adjust the volume of the speaker. I went up the resistor amount and tried an array of options: 200 Ω, 250 Ω, 350 Ω,  and 1K Ω. The 200 Ω, 250 Ω, and 350 Ω didn’t have many changes from each other and the noise was still too loud. I ended up choosing the 1K Ω resistor, but now I feel like I could have used a bigger resistor. 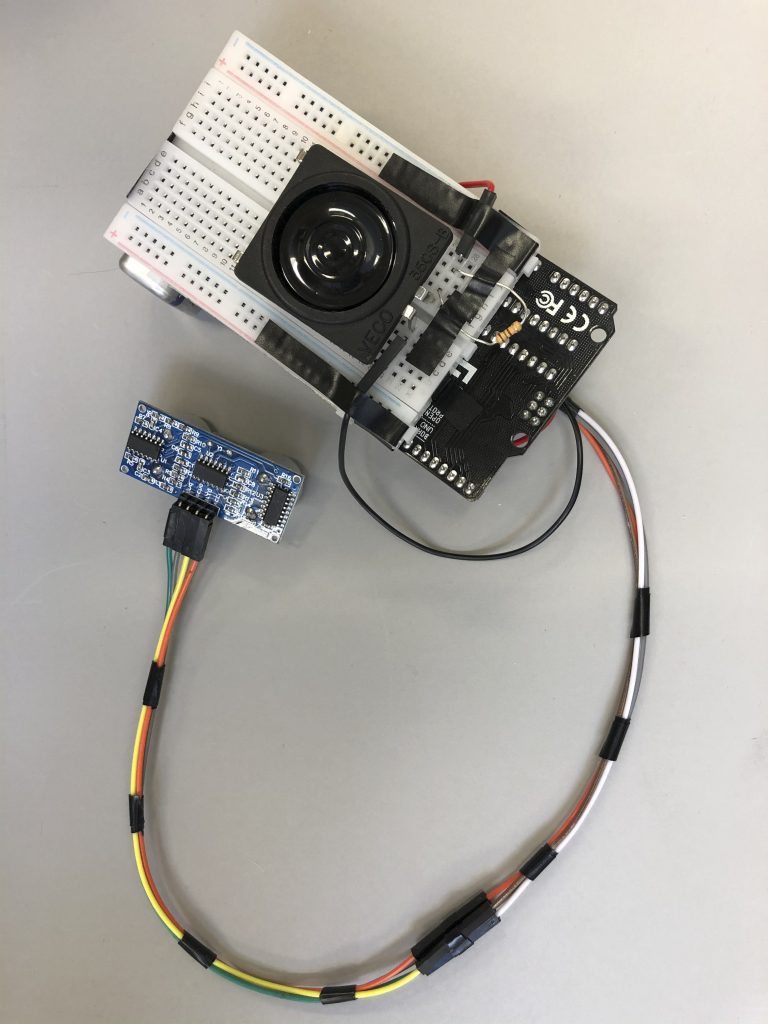 Second Speaker Option. The final speaker used and connected and tested with the ultrasonic sensor. Final decision to use a 1000 ohms resistor.

I believe that my lack of coding skills limited my first initial design and the scope of the project. If I started off with a more difficult and complicated idea then I could have explored more possibilities with the design and mechanics while keeping the same initial concept. I believe I got hung up on the fear that I wouldn’t be able to execute the project if I made it beyond my coding skills. However, while working on this project, I did learn that I liked the planning and the design part of the process, figuring out a way to fit the mechanic/system in a certain limited space. The problem-solving in the design was quite intriguing and fun, as well as designing the files for the outer containers. The constant tweaking of design could have been avoided with better measurement and estimating in the beginning if I planned and had the inside mechanics ready before designing.

While I enjoyed designing and making the project look more aesthetically pleasing, I wish I would have thought beyond the aesthetic and more in the direction of practicality as well especially thinking more about the possibility for this project to be used by others and not just limited to my use.

I am overall happy and satisfied with how the project turned out as it did what I initially proposed to alert me when I get too close to the screen. However, I wish I would have added more components and possibly limited the size of the project after listening to some of the responses I got from the critique such as:

“I think the sound would kind of scare me and would prefer having a light to notify me.”

“… but this definitely could be smaller.”

“Maybe a vibration would be less of a disturbance than a speaker.”

“I think if there is some way to fit this on a “case” for the computer and not have to have an extra box would be even better.”

“The device is very practical, but it is also a little inconvenient to install and carry around. The design of the sensor is very nice!”

“I would like to suggest if both the proximity sensor and speaker are integrated into one piece using a pro mini or a nano board. It is smaller in size as well.”

as well as the comments from the professor. After reading and listening to the comments, my initial thought was that I was happy with what I had, but after a similar critique responses came up, I understood where the comments came from and how this may have been far more relatable problems to others and not limited to only me. This led me to think beyond the project and asked myself, “How will this be designed if it was a product used by others and sold to the public.”

This question I asked myself after the critique got me thinking that I should have added a feature where the sound could be turned on and off. In addition, I could have added another alerting feature in the device imagining it be used outside in a more public place. Another comment that came up was the size. In the scope of this project, I believed the size was appropriate as it followed my initial design, but I do also believe that I could have designed it to be smaller to be more portable and easy to use.

As I thought about the responses, this got me thinking, that I would change a lot if I were to build another iteration of this project. While keeping the same concept of the project, I would redesign it so that the device is small and portable. I would also use a micro Arduino that will have both the sensor and the sound in the same component. I would also try to find a smaller speaker to attach to the micro Arduino. The sensor would be smaller and I would have tried to use the Micro SHARP IR sensor or a smaller sensor. I would also add a component in the device where I could turn on and off the sound. In addition, while it might be difficult, I would like to add a wearable wireless system that alerts the user. One example would be a wearable bracelet or ring that both flashes and vibrates if the user is too close to the computer screen, in addition to the sound alert attached to the sensor. 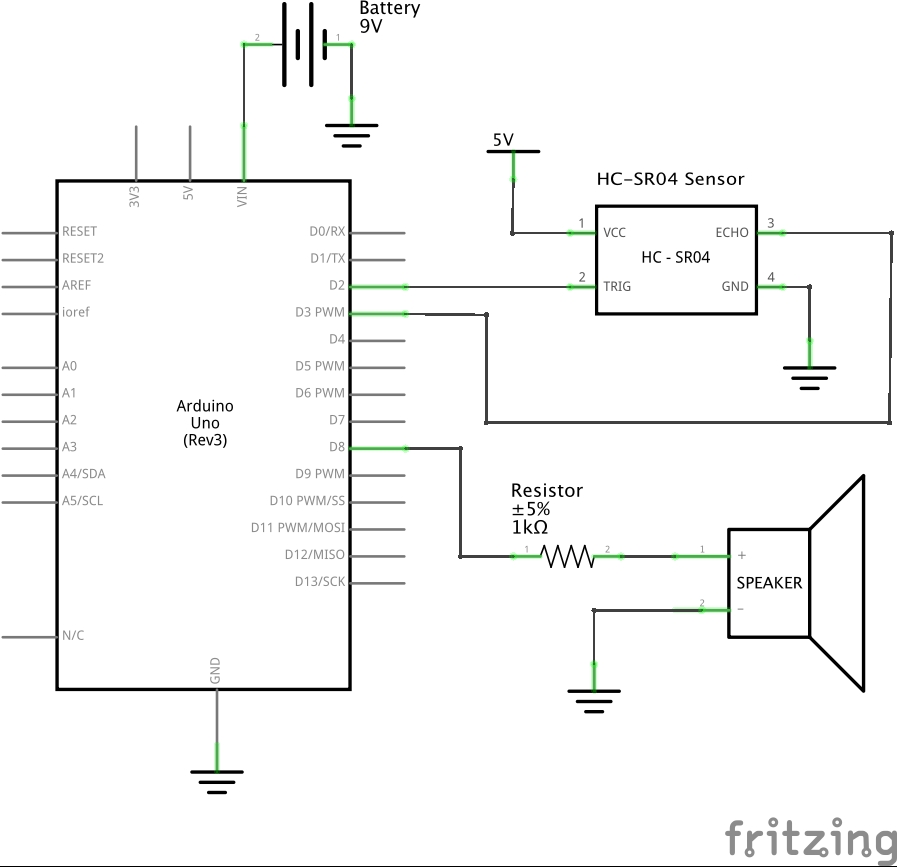