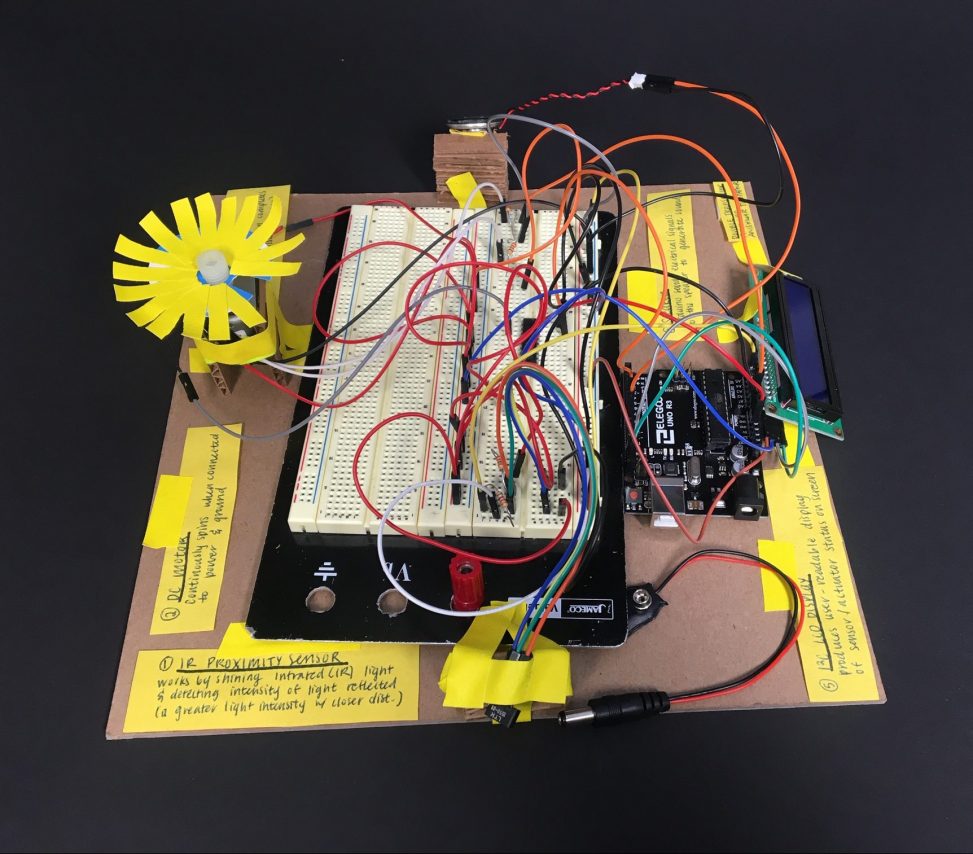 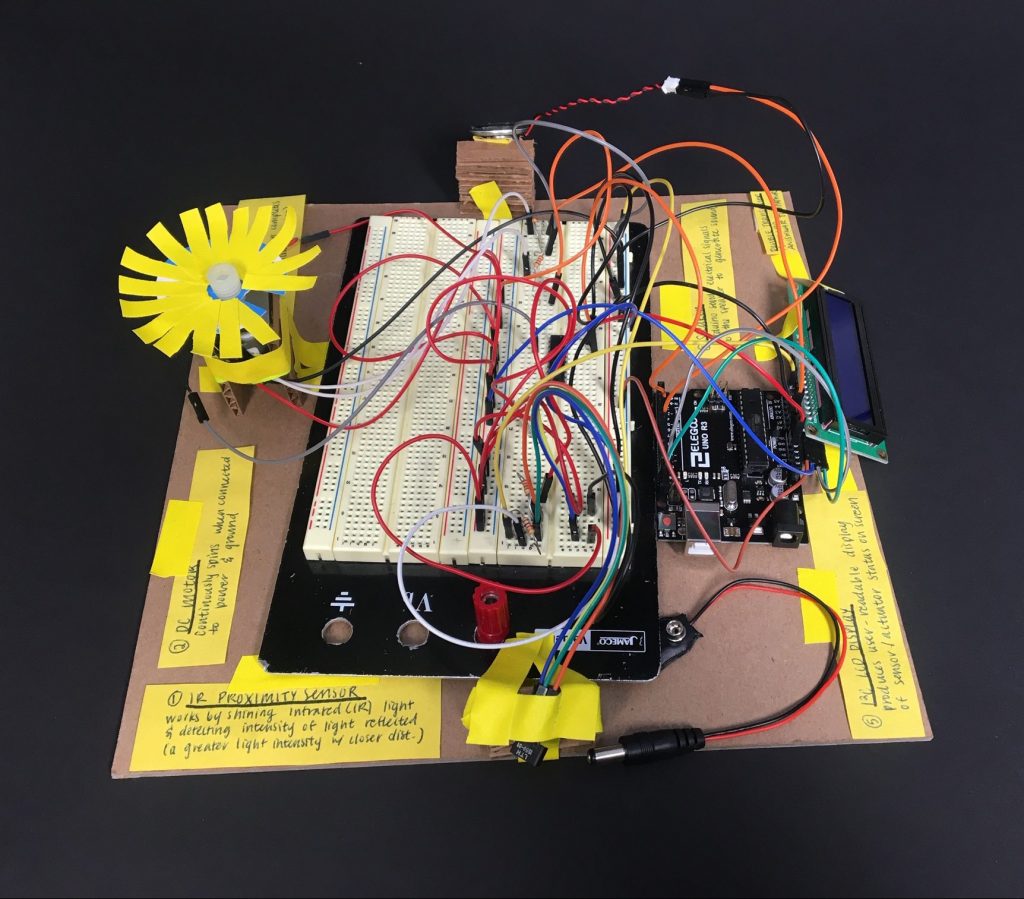 Our completed double transducer with labels. 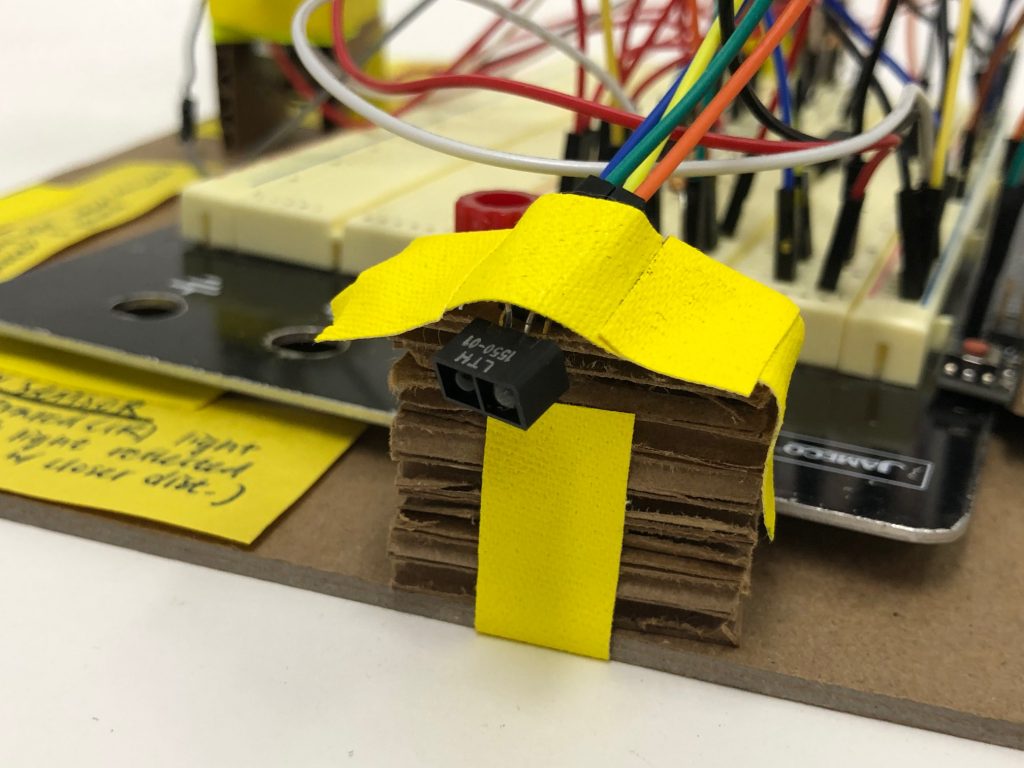 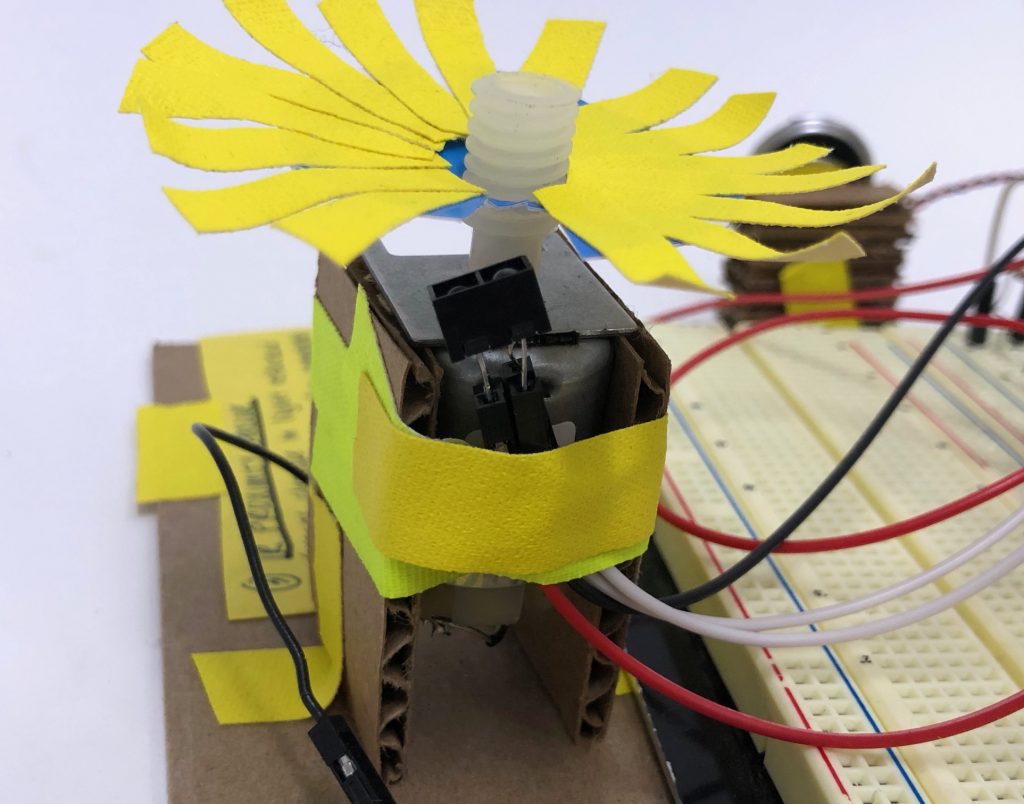 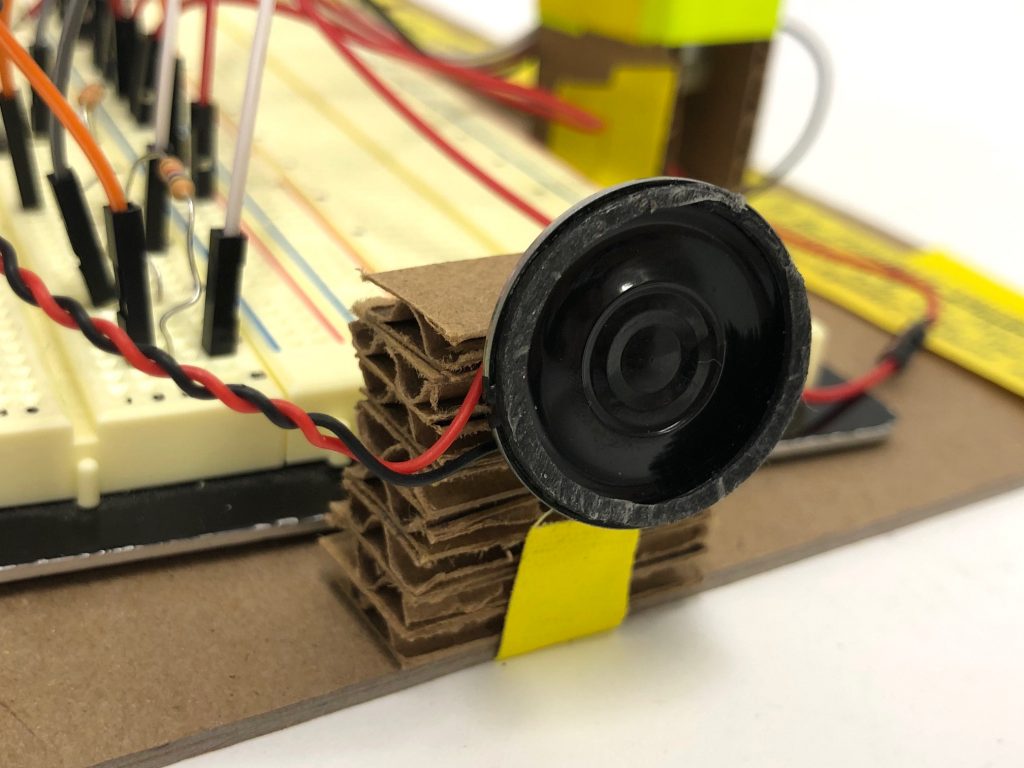 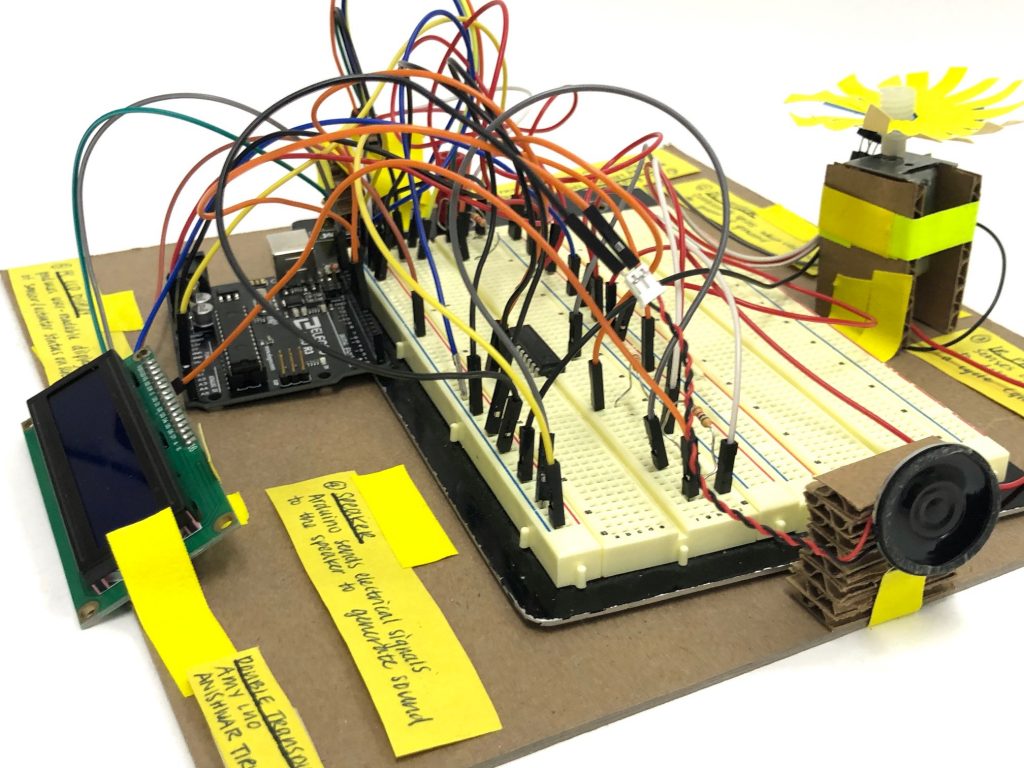 Overall physical layout of our model.

There is a sensor on the side that tells a motor to start spinning faster once it detects when something is moving closer towards it. Another sensor reads in the speed of the motor’s rotation and tells a speaker to decrease its volume in response to faster rotation. 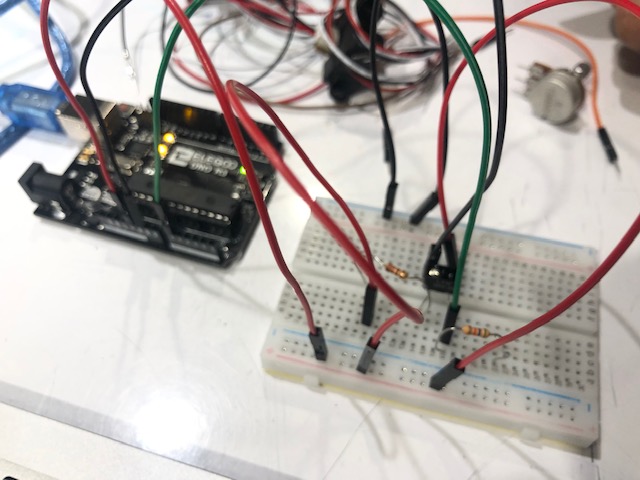 We began by trying to figure out the wiring for the IR photosensor to read in distance values. 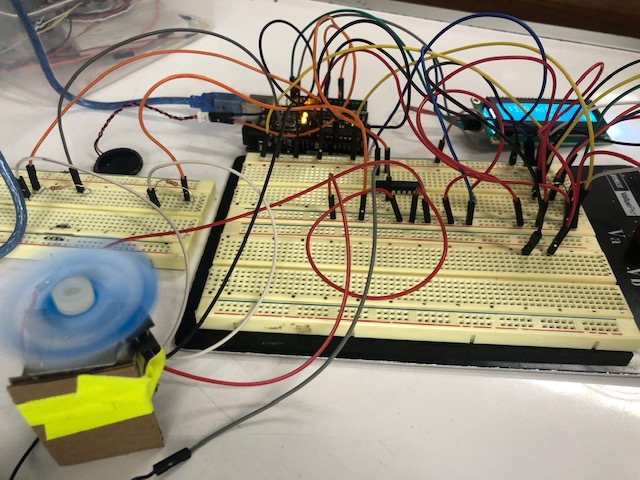 We tested out the DC motor at varying speeds depending on amount of voltage passed through. 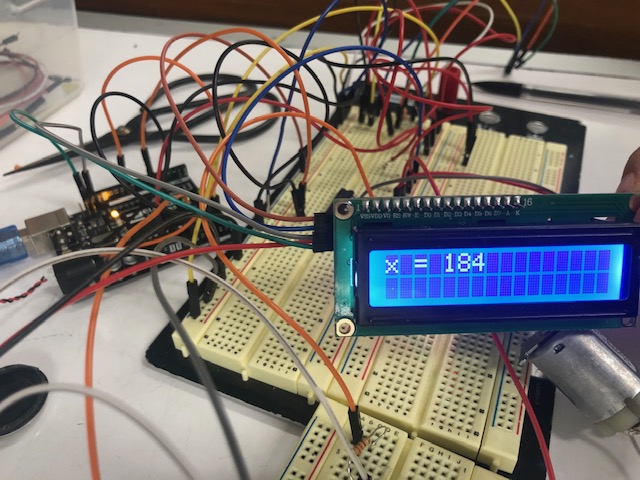 We tested out the LCD display with varying sensor value inputs.

To build our project, it was difficult to first approach all these new components we’d never worked with before. This project went through several iterations before we finally settled on our current design. We had considered using rotation angle as our intermediary step since we could use the hobby servo motor, which we were already familiar with. However, in the end we decided to go with rotation speed because although less familiar, it seemed to be a fun challenge.

Surprisingly the smaller mistakes often caused us the most trouble. For a long time we couldn’t figure out why the speaker wasn’t producing noise, and it turned out the speaker pin was just defined as the wrong number. The wiring for the IR proximity sensor also wasn’t working before we realized it was because we were just missing the pull down resistor at the side. For later components, we noted it was important to wire things carefully and pay attention to all the details of a schematic. In addition, mapping the values caused issues because we were giving the incorrect ranges. We realized it would be much easier to tackle this project one component at a time rather than a bit of everything at once as it would help isolate where errors were occurring.

One of the biggest challenges to tackle for this project was figuring out a way to measure rotation speed. Because there was no component which could directly read in speed, we had to get creative with our options. The Internet was mostly a useful resource as there were online tutorials to help us navigate through working with unfamiliar libraries and parts. But in this case, we over complicated things by trying to follow confusing online tachometer tutorials. In the end, we decided it would be better to take our own approach. We used an IR sensor and distance calculations to track rpm. It was a much easier solution as we got to reuse the same component, just repurposed as a tachometer.

For future improvements, we could try cleaning up the appearance of the physical model, and it might be nice to build a container to hide the messy wires. Despite all our setbacks, we were able to put everything together and get a successful transducer working. We learned not to overcomplicate simple tasks and to tackle future projects with the bigger picture in mind. Overall, this project was a good learning experience as we learned how to use new parts and apply creative problem solving. 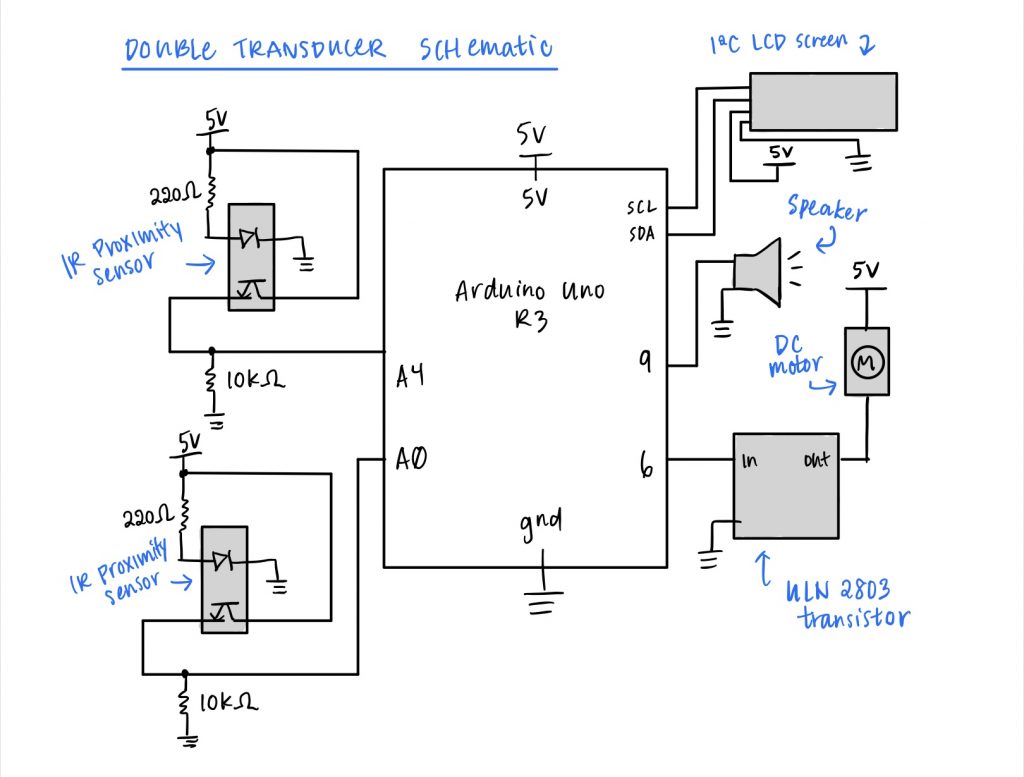