For our Physical Computing class at Carnegie Mellon University, our final project was to prototype and design an assistive device for an older Osher student over a five-week period. Our Osher student was a lovely lady named Lynne who was looking for a way to rest her hands, which hurt due to arthritis in her fingers’ joints. Thus, we designed a large four-key keyboard to be used by her feet and aptly named it the Foot Keyboard. The keyboard can be plugged into a computer as arrow keys input or alternatively used as a standalone Simon Says game. The project began with interviewing Lynne in order to brainstorm about the device (Interview Documentation). We then received feedback on our prototypes of the device (Prototype Documentation). We concluded the project with a final critique from our Osher student, Lynne.

Our project is a foot arrow keyboard. There is a 14 in x 10 in platform with four arrow keys arranged in one row. The keys are styled to look and function like a gas pedal in a car. On the back edge of the platform is a hinge with a kickstand, which is adjustable to allow Lynne to set the keyboard at any desired height. There are two functions to the keyboard: a computer input mode and a Simon Says mode. For the computer input mode, Lynne can connect the keyboard to her laptop and browse the internet using the arrow keys, or she can play games that only require the four arrow keys (like Tetris or Snake). For the Simon Says mode, the keyboard is preprogrammed to randomly generate arrow key patterns for Lynne to repeat after. The difficulty of the Simon Says game starts out easy with a short pattern to repeat and gets more difficult as she continues to play.

Right side view of Foot Keyboard 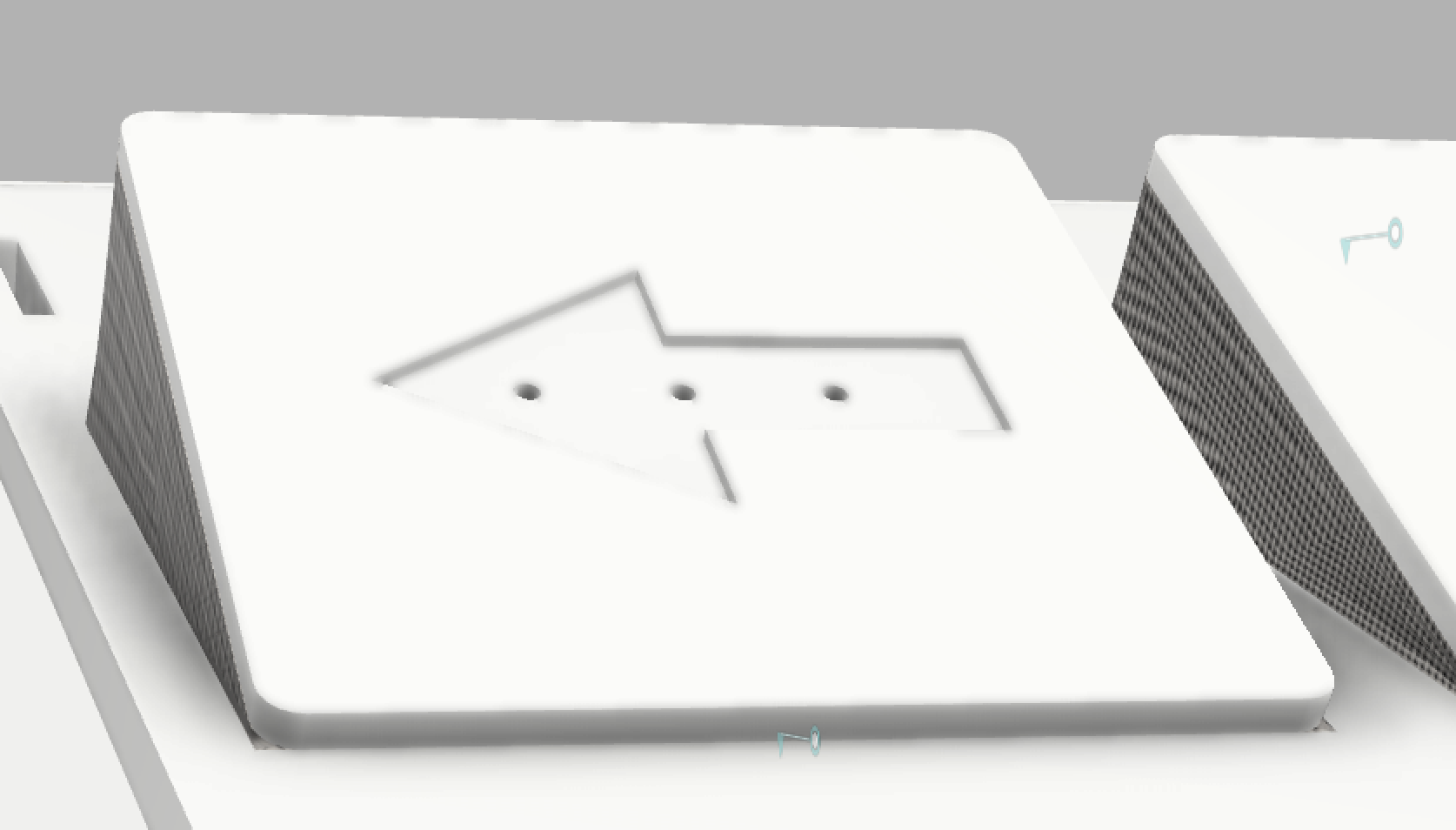 Demonstration  of joint movement for Arrow Keys and Kickstand:

After a long day at work, Lynne arrives home and considers how to spend the rest of her afternoon. She has spent the majority of the day using her hands and fingers on her work computer and the pain from her arthritis is very uncomfortable. After greeting Mendy and her two cats, she decides to give her hands a rest and occupy herself by using the Foot Keyboard! She powers on the device and plays a couple of rounds of Simon Says, to see if she can beat her record of 6 rounds from the previous day. She enjoys the fast-paced, challenging nature of the game.

A few rounds (and high scores) later, Lynne plugs the Foot Keyboard into her computer and switches the mode to ‘CPU Input’ Mode to play some online keyboard games, like Snake and Pac-man. After she feels like she has played enough games for the afternoon, she opens up her favorite online book and begins reading, using the Foot Keyboard to flip pages. When bedtime eventually rolls around, the pain in her hands has subsided, she unplugs her Foot Keyboard and prepares for bed.

How we got here:

There were multiple steps that we took to get to the final project after the initial design and prototyping such as multiple rewiring in TinkerCad, debugging the Code to work as intended, as well as changing up the design to create a believable, functional device for Lynne.

The TinkerCad wiring and the internal mechanic were made before the 3D Cad Model, which led to some mishaps as the button location didn’t match up with the model shown. Initially the ON/OFF and Mode button was a push button, but with some discussion with the team, we switched to a slide switch. In addition, before the code was added to the TinkerCad, the wiring for the push button was wired to work with a pull up input. We kept the pull up wiring and we decided to change the code to work with a pull up input. Once the design of the 3D Cad model was finished, we went back and changed the wiring to match up the location as close as possible. The Up and Down button location was swapped, as well as the indicated LED, in addition to the ON/OFF and MODE switch location. The wiring for the battery was also changed after creating the schematic, as I noticed that the ON/OFF button was not connected to the battery. 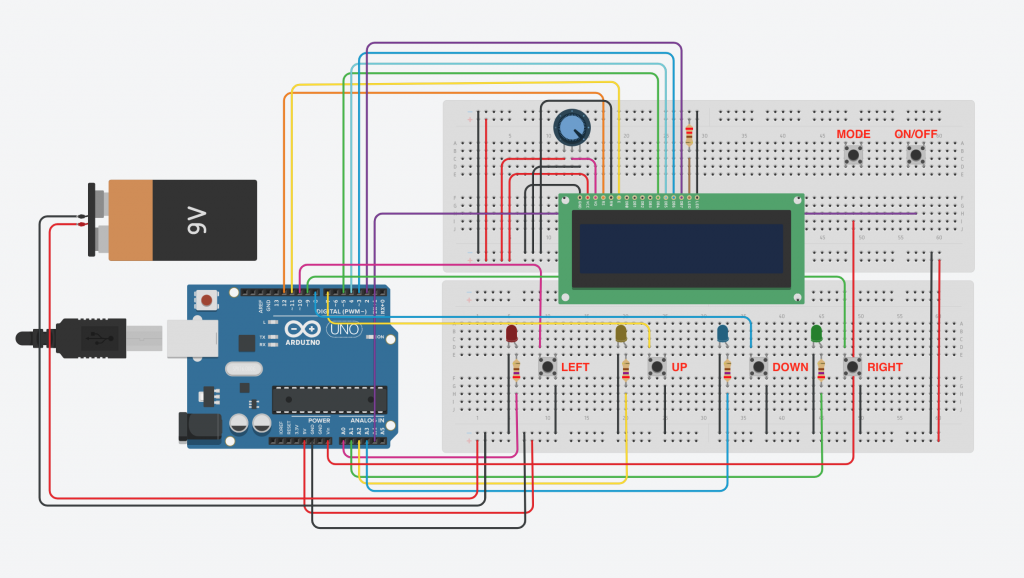 The very first draft of the TinkerCad wiring: The ON/OFF and MODE is push-button, and the arrow button is in a different order than the finalized Foot Keyboard.

For one section of the code: the computer input, we discovered that type of Arduino matters. While the code was simple with one add on of a library called “Keyboard.h” and input called “Keyboard.press” the code wasn’t able to be read with Arduino Uno. With research it was due to Uno’s different USB communication from other Arduinos. With further research Ardunio Leonardo, which has a certain USB communication that can read Keyboard and mouse inputs when connected to the computer, is the best option to use if we were to make it physically. 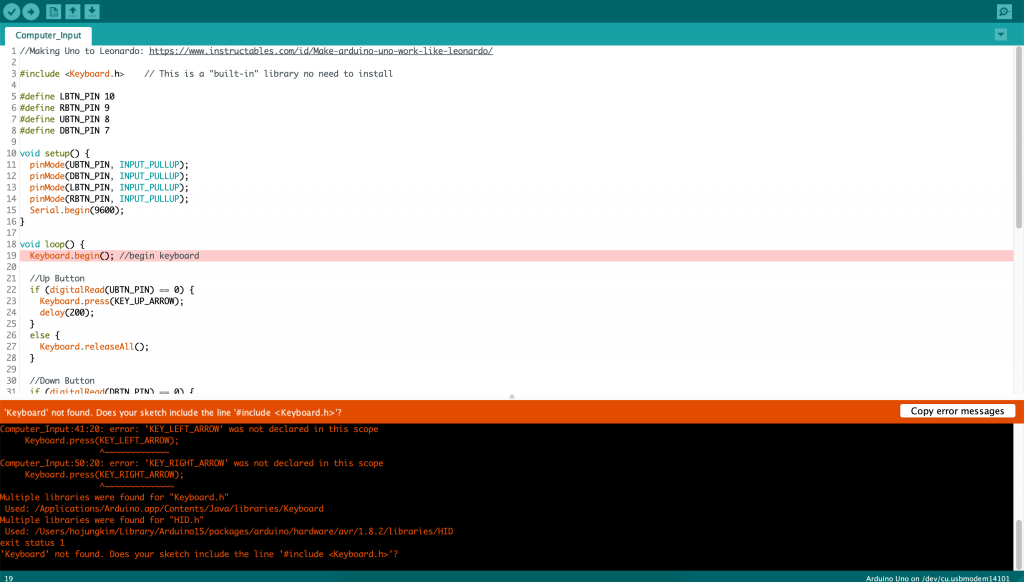 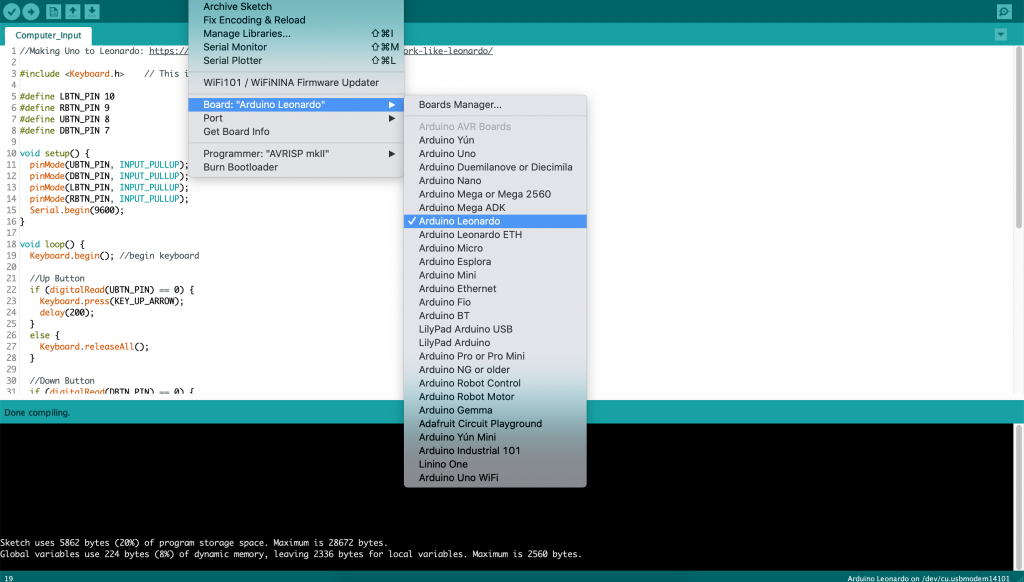 Another issue we ran into was integrating the code with the Tinkercad model. To represent variables with different “states”, such as the current Simon Says game mode or the direction of a button or LED, we decided to use enums in our code. This way, we could use a switch-case statement to cleanly execute different blocks of code depending on which state a variable was. We tried to use two enums (game_stage and dir) and this compiled mess-free in the Arduino IDE, but unfortunately caused mysterious bugs when pasting the code into the Tinkercad model. Unable to figure out the issue on our own, with the help of Zach, our professor, and Harshine, our TA, we were able to get the Tinkercad model working by replacing the second enum (dir) with the use of an integer (with values 0,1,2,3). 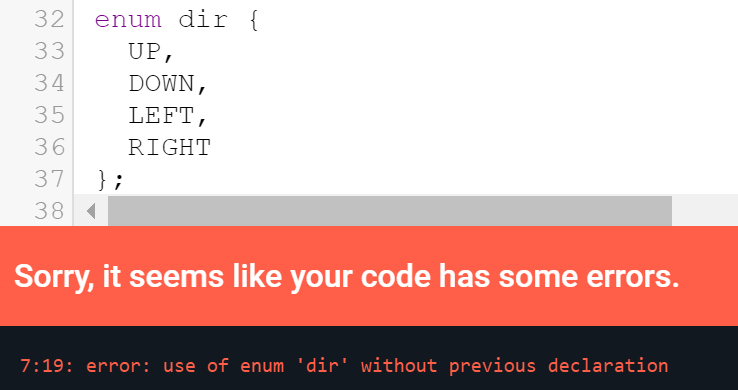 Tinkercad would throw compilation errors when attempting to use a second enum for direction. 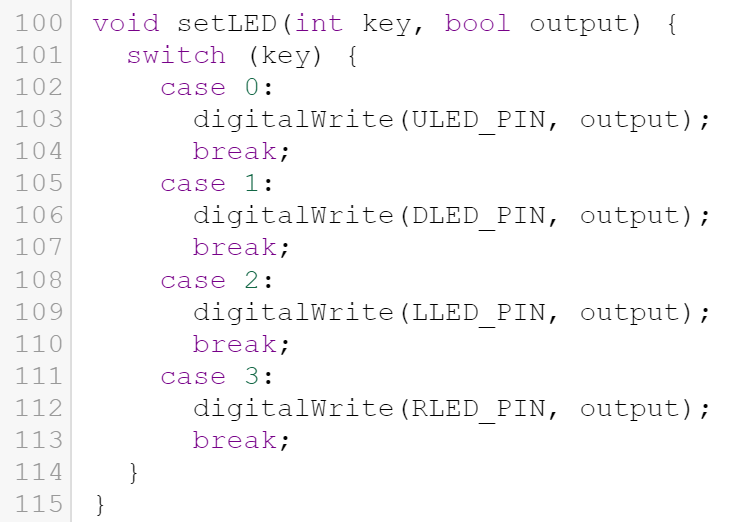 Switched from an enum to using an integer to represent the four directions.

We received a lot of helpful feedback and ideas from the final critique. One interesting idea which emerged from discussion was “Have you thought about adding a handle to the device?” We thought this was an excellent suggestion, since: 1) a handle wouldn’t be too hard to add to the design (a wide rectangular hole cut from base on the opposite side of the power/mode switches) and 2) it would make moving the keyboard (perhaps from the ground to the recliner) an easier endeavour. Other helpful suggestions appeared in the written feedback. One critiquer suggested mitigating typing fatigue by using “a nicer (mechanical) keyboard that isn’t as tiring to type on (since you don’t have to bottom the keys out)?” This suggestion ties into another provided during discussion, which was “There are large pre-made keys you can purchase which would allow you to avoid using foam.” Typing fatigue is definitely an important consideration, especially for a keyboard which works the typically unused foot and calf muscles. A feature to fine-tune during actual fabrication would be the thickness of the foam beneath the key-pedals to find a balance between sensitivity and fatigue. If this balance turns out to be difficult to obtain, looking into purchasing manufactured keys would definitely be a slightly more expensive, yet reasonable, suggestion to consider. A fourth suggestion, found in the written feedback, was to add a fifth “spacebar since a lot of games also require that button.” During the design phase, we played around with the idea of adding more keys but concluded that four was an optimal number, in terms of keeping the size fairly small and avoiding typing fatigue as much as possible.

Working remotely has been fairly strange as physical projects are more easily done in person. Overall, this experience was a positive one. Coordinating with each other online wasn’t too difficult. We found most difficulty in not being able to collaborate on unshareable files together, such as the Fusion 360 model and our Arduino code. Other than those challenges, we worked fairly cohesively, and there is not much we would do differently given the chance to work together again. Our client, Lynne, was extremely fun to work with, and she easily kept in contact with us as we worked on our device. We would’ve loved to meet with her in person and show her our work face to face, but chatting with her through Zoom has still been an enjoyable experience.

Our experience of working with an older individual was pleasant, as Lynne was very helpful in each of the steps we took, and how as a whole we were able to keep our conversation light and fun. What was difficult initially was coming up with a personalized device for Lynne from our first meeting, as many of our initial designs could have been used by the public. What helped us get through the initial challenge was, as mentioned before, how Lynne was easy to keep in contact with as we worked on our device. As we narrowed down our idea, we were able to ask additional questions, such as what games she enjoyed and what difficulties she may have with our initial foot keyboard design. Each critique we got from Lynne, we were able to slowly make the keyboard more personalized for her, which was a big help as we finalized our project. Because Lynne was tech-savvy there were no problems while working remotely, but if we were to do this again, during our initial interview, we could have asked multiple follow up questions, so we do not assume things, for example, when we initially designed it to be used on the floor rather than a recliner. 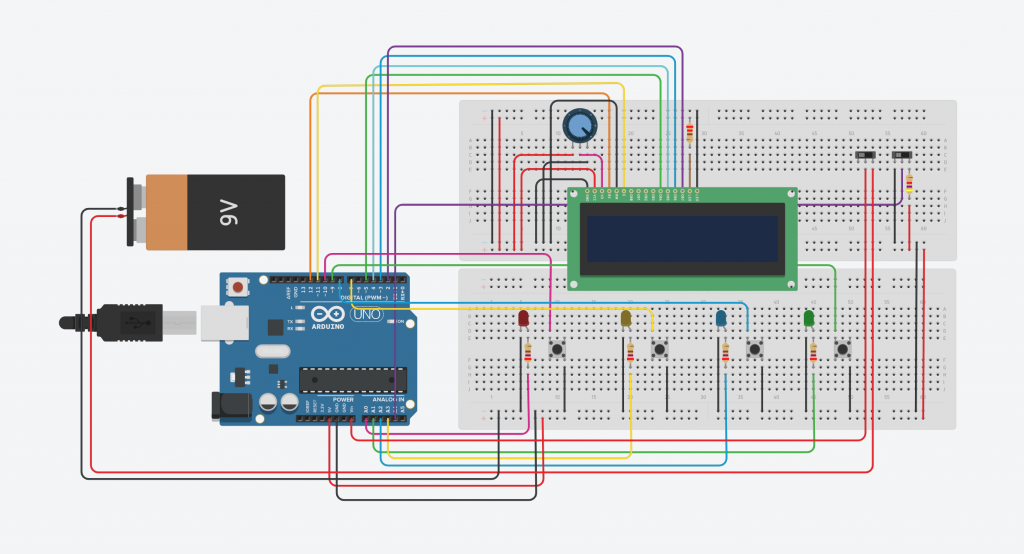 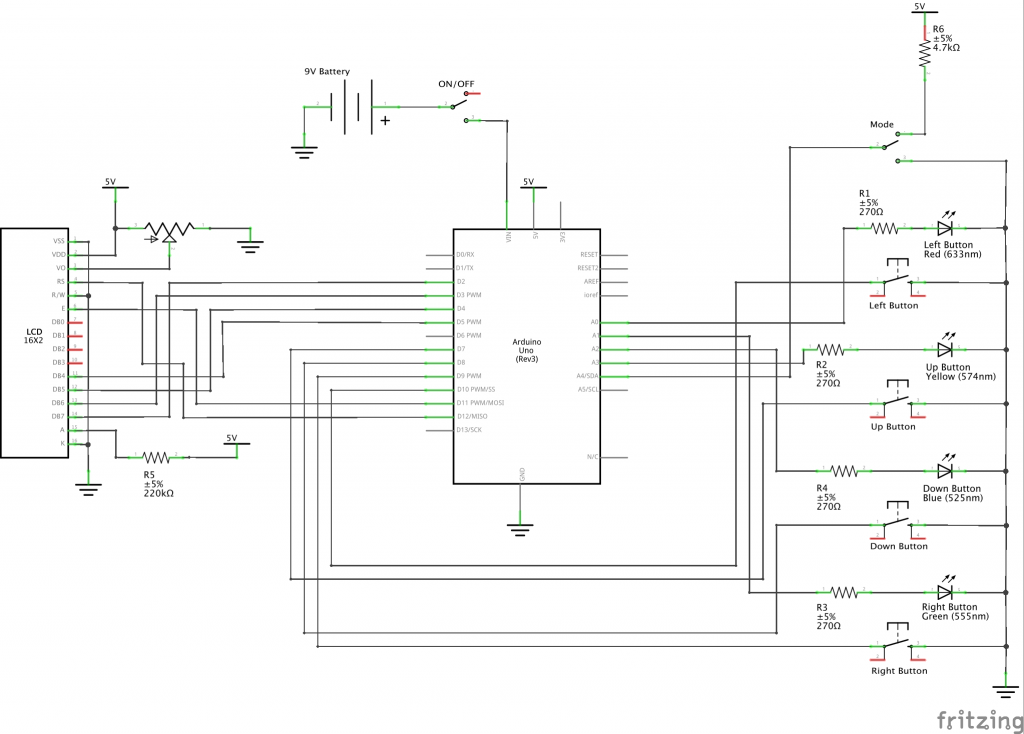