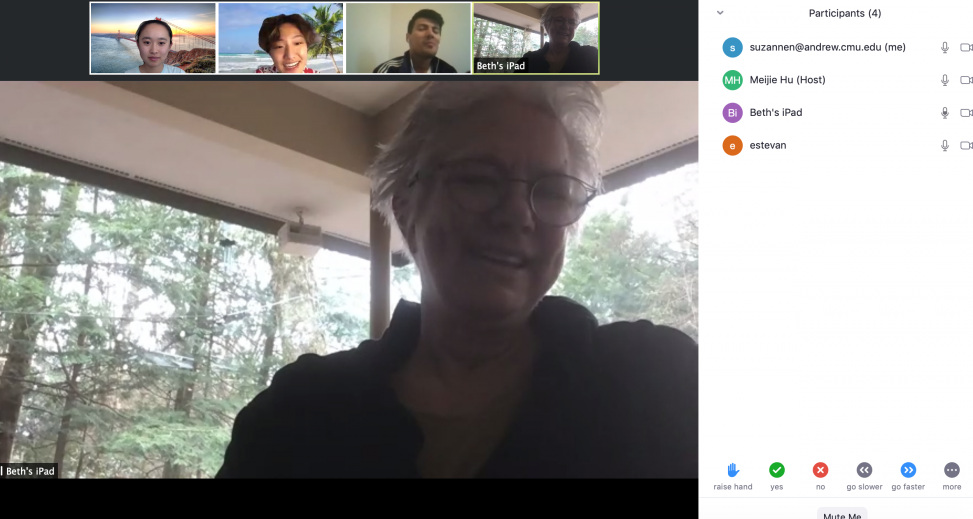 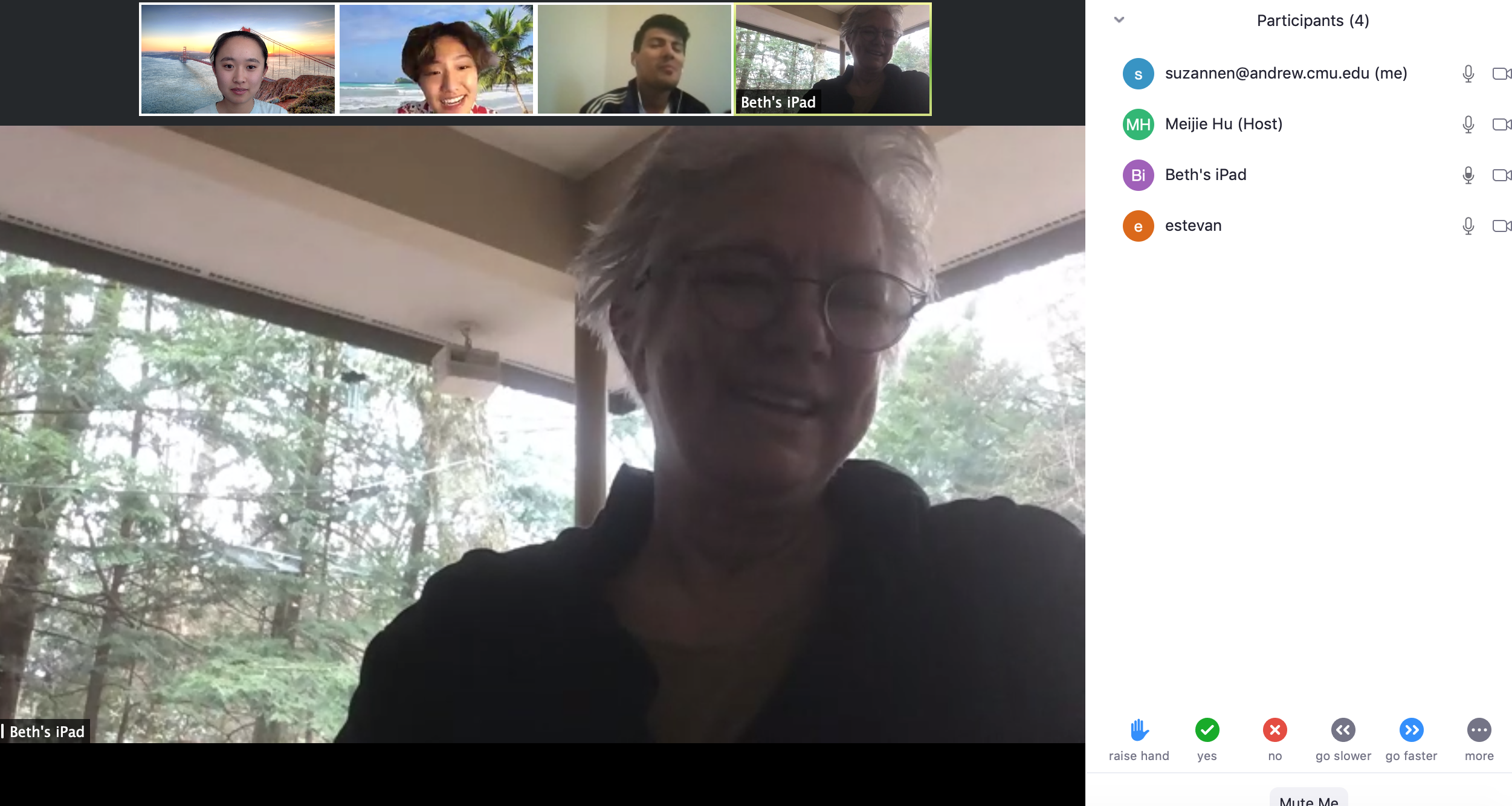 For this project, we will build an assistive device for our Osher student, Beth.  On Friday, March 27th, Meijie, Estevan, and Suzanne (Team Beth) held a call with Beth over Zoom at 6 p.m. to get to know more about her and what we could build that would assist her in her day-to-day life.

Our group was divided into two, one interviewer and two note takers. They weren’t permanent roles, but would help the flow of ideas and conversation.

We planned to first start off with going around with introductions to break the ice a little bit and then to proceed with the purpose of the meeting. This included a very brief description of the project, such as our goal, time frame and limitations. Then we would open it up to Beth to talk about herself.

After that, we had these questions prepared to get more specific answers about how we might be able to build an assistive device.

A general rule our group had set was to speak up if something she was saying could be taken further or turned into a potential idea for a device.

We planned to try to end the meeting off with a narrowing of 3 ideas or so.

Finally, we planned to thank Beth and let her know plans for getting her critique.

Beth lives in a neighborhood to the north of Pittsburgh and owns 3 acres of land (wow.) She had multiple jobs and has been a very active member social work of Pittsburgh. Beth talked about how she doesn’t really have much troubles in life so we explored several activities to brainstorm ideas, including walking her dog, working with electronics, calling while driving, and taking out the trash.

A main issue she explained was organization of papers and clutter. Beth talked about how it would be helpful to have a way to categorize things she should throw away and keep. We tried to think of a labeling device and a device to easily put things online to sell, but what we would be making would just be a label-maker. 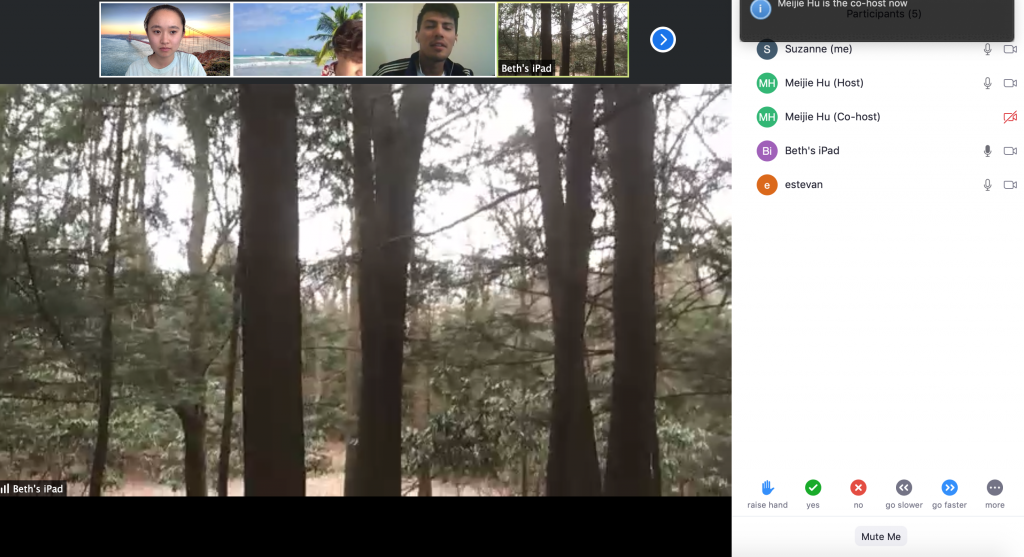 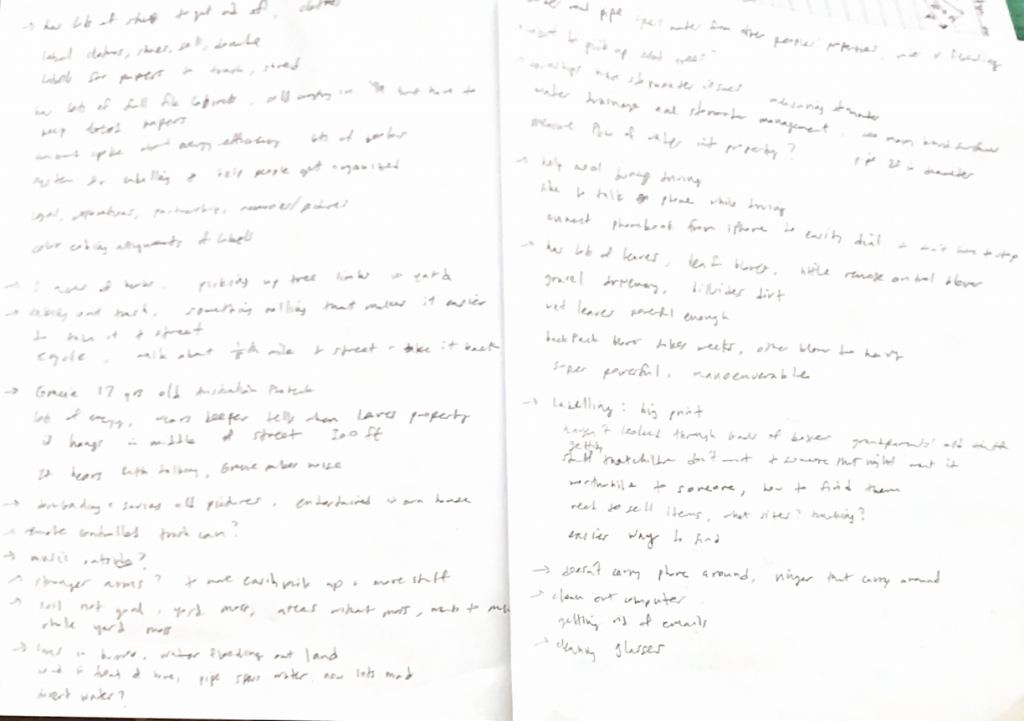 Notes from the meeting: we talked about a wide variety of activities to brainstorm ideas

She discussed other issues like her dirty glasses, getting rid of emails, and not carrying her phone around. Beth mentioned an annoyance towards taking out the trash and we talked about making a remote controlled trash can that she could drive out to her street.

One idea mentioned was building Beth a strong lift for her to be able to move the tree limbs and piles of wet leaves from her yard.

She also told us that the soil in her yard isn’t good, there are a few areas without moss, and she wants to make her entire yard covered in moss. She explained how moss can be made by mixing buttermilk and moss. This brought up another potential device, something that could spread moss over all 3 acres.

Our first comment from discussing as a team was that “Beth is dope.” She has been a caterer, a social worker, a business owner, and even more! We all agree that she was super nice and that the meeting went well.

The meeting did initially follow our agenda with a question and answer format, but later we just all racked our brains for an activity that is difficult to do because she was really having a hard time thinking about something she has trouble doing. However, if this were to happen again we would give Beth a better space for brainstorming and a little more structure in identifying inconveniences.

Nonetheless, the wide range of things we talked about allowed us to come up with a variety of ideas. We ended up narrowing down what we gathered from the meeting to three potential assistive devices.