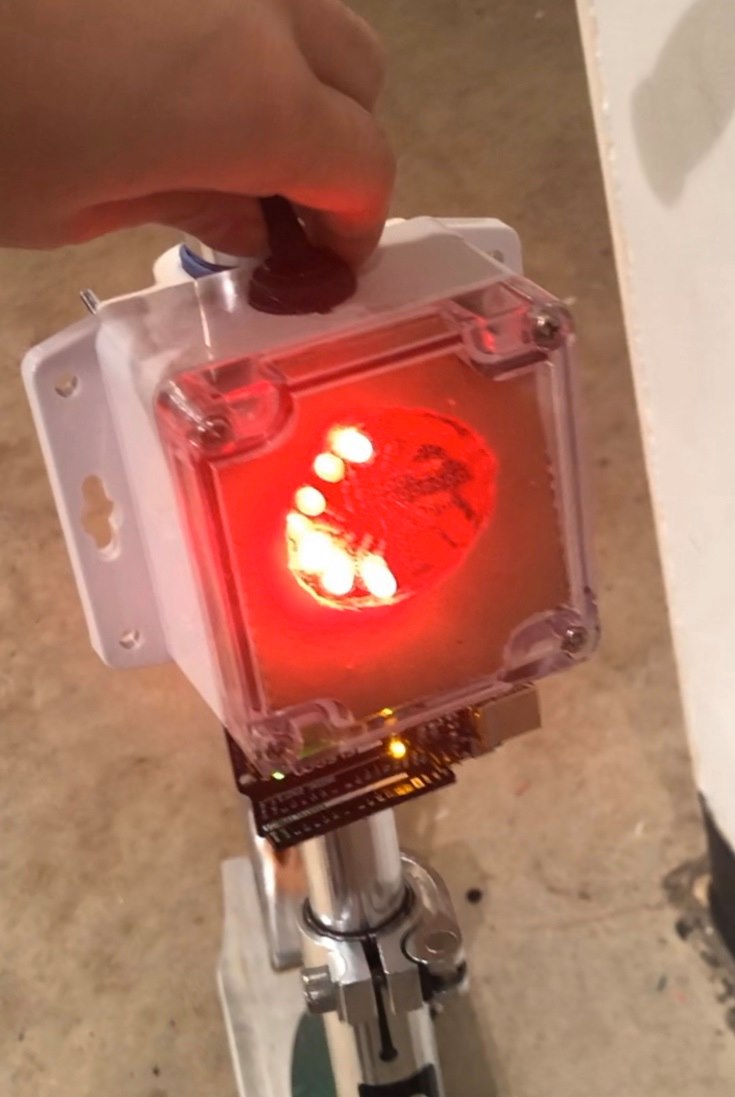 [Disclaimer: all process images and videos were unfortunately taken using my iPhone camera and could not be retaken do to the circumstances. Please excuse the poor quality or framing of the images, if possible.]

Video displaying the switch being used to toggle between the Left, Right, and Off mode. 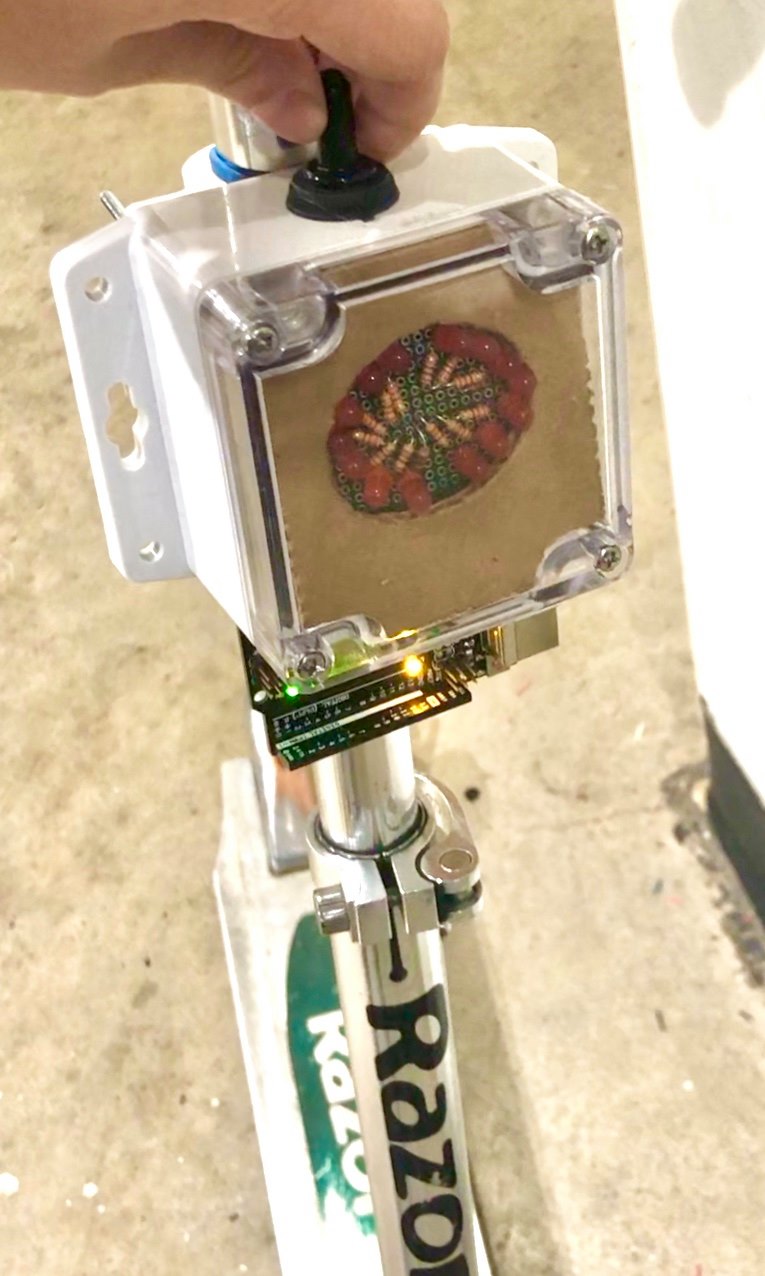 Overall photo for proportion and scale of turn signals device in relation to human hand and scooter.

In the Left mode, when the switch is pushed to the left, the left set of LEDs blinks on and off in half-second intervals. The same applies for the Right mode. 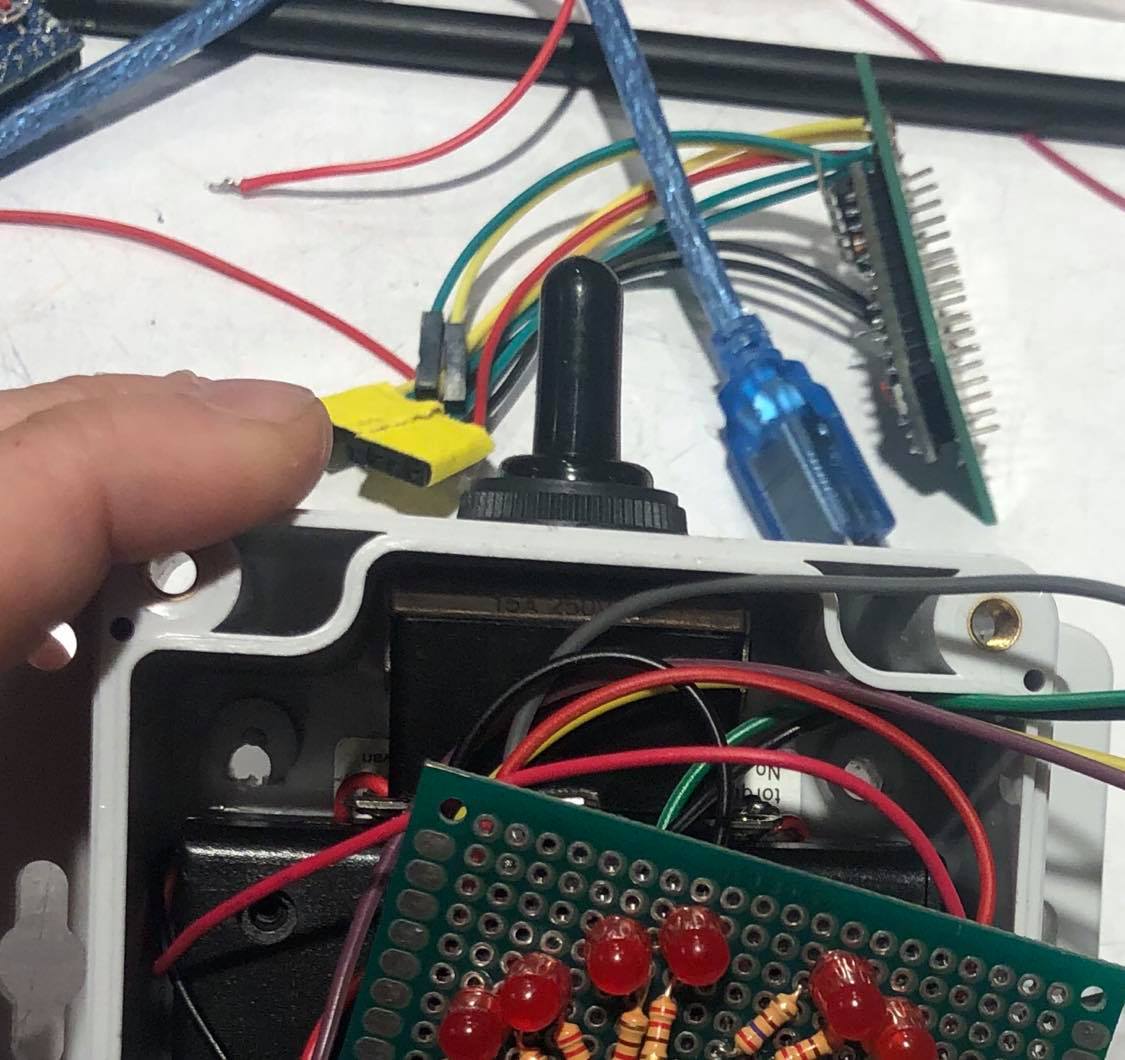 This On-Off-On DPDT switch has 3 of its 6 pins hooked up to the Arduino, 2 of them to 2 separate input pins and 1 of them to 5V. This switch allows the user to toggle between Left, Right, and Off mode. 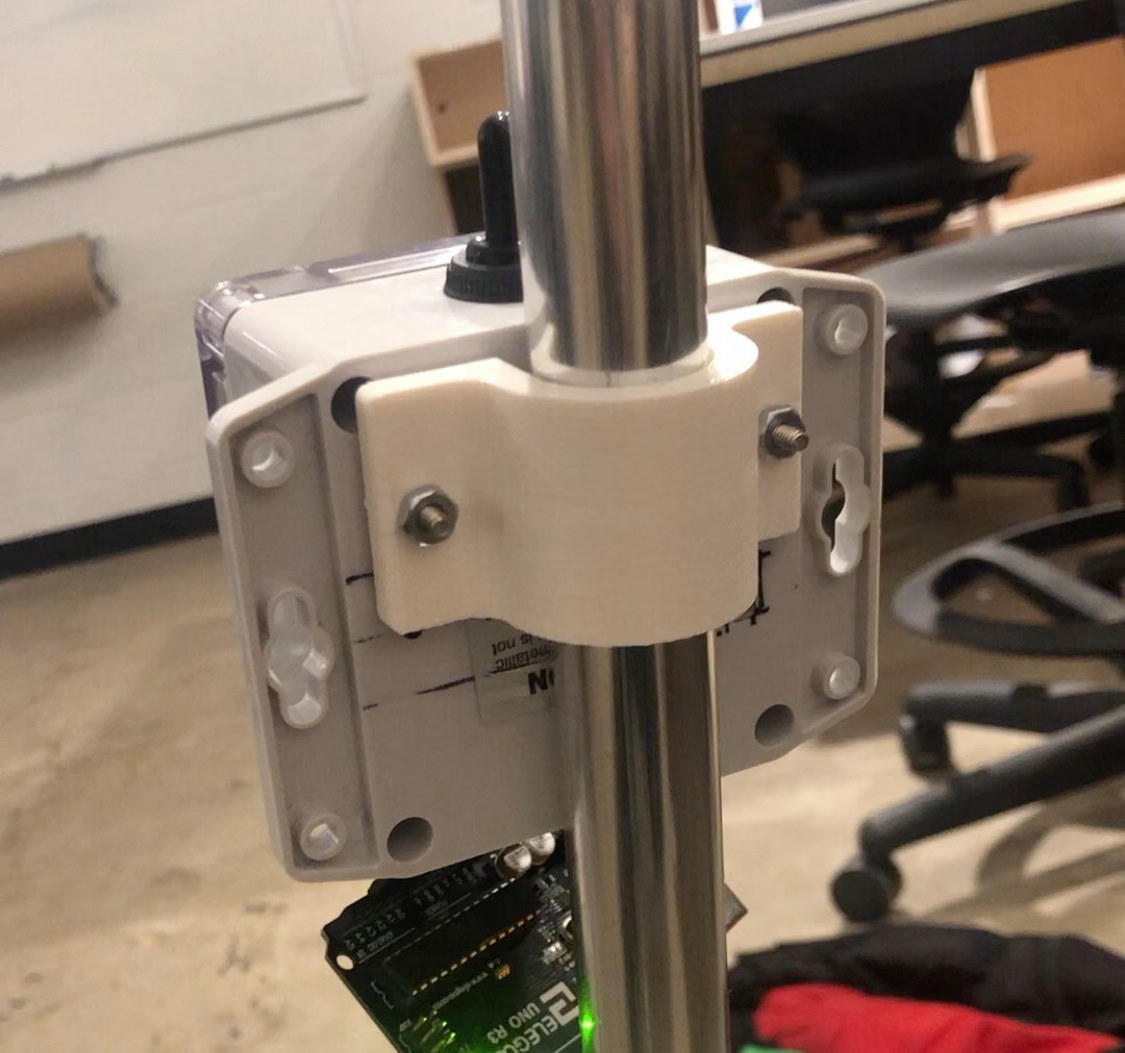 This 3D-printed clamp was custom-designed in Fusion360 in order to snugly fit around the vertical bar of the scooter and attach the device to the scooter. 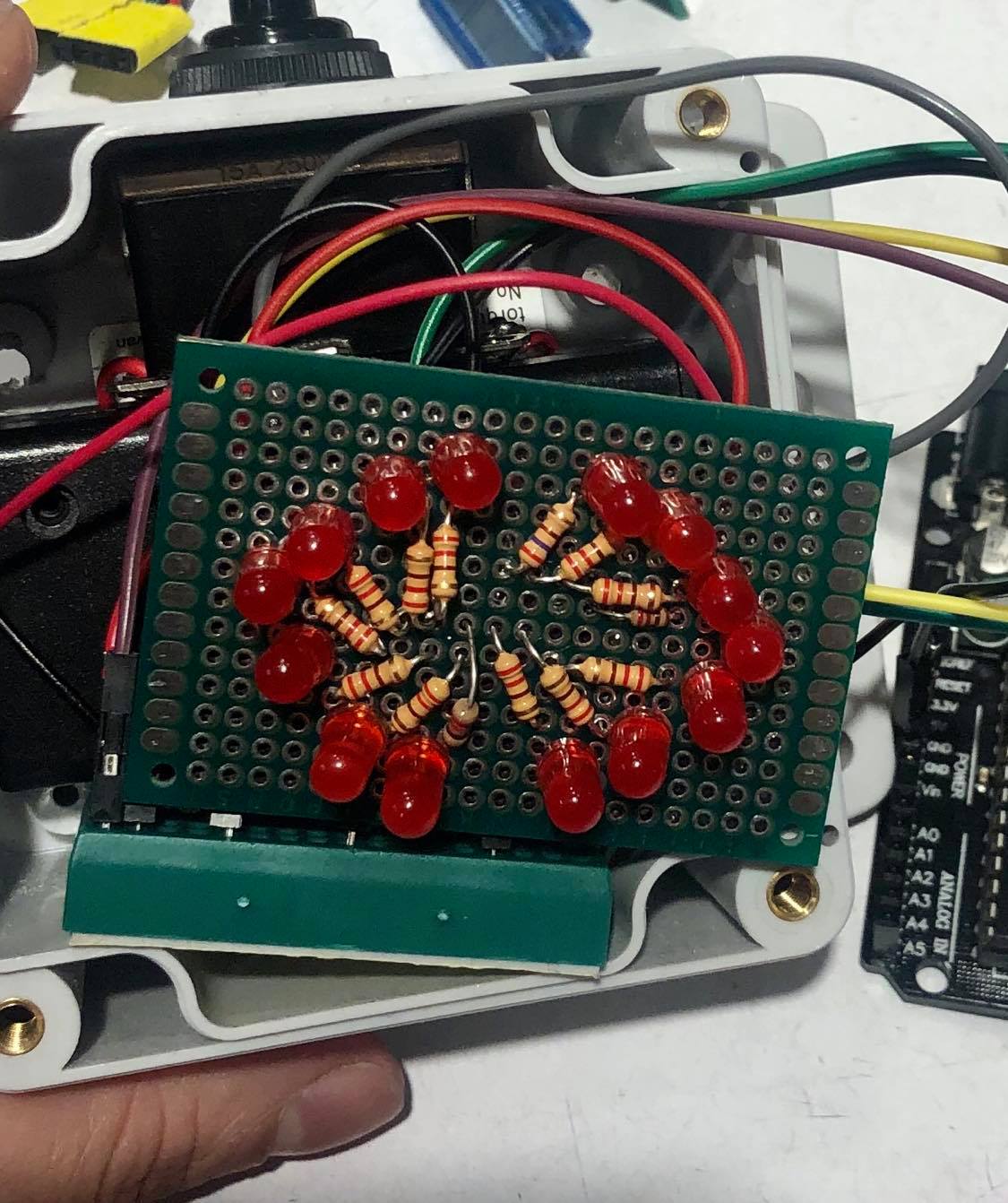 Images Showing the Turn Signals in Use

[Hoped to insert an image of the scooter being ridden outside with the turn signals in use but didn’t have access to device.] 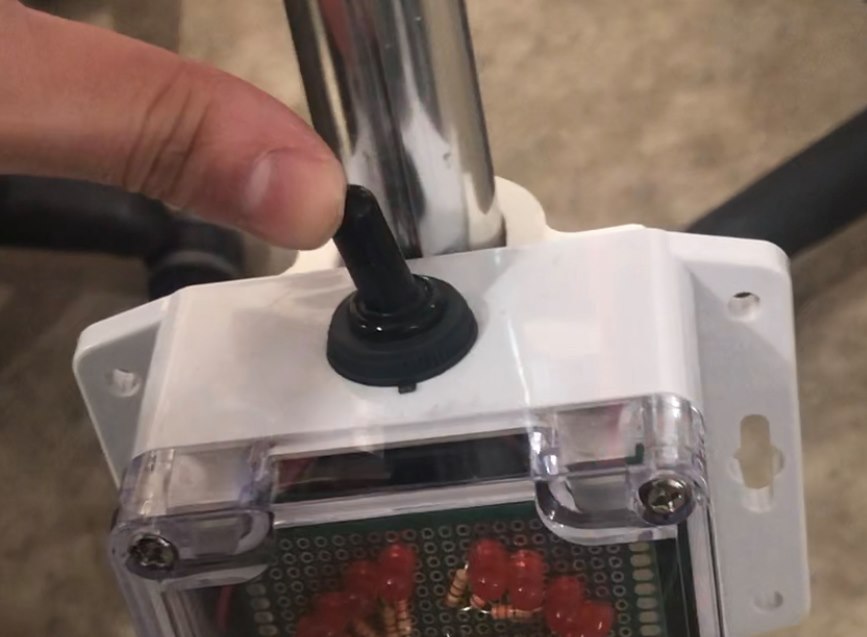 The switch allows the user to easily change the blinker between left blinker, right blinker, and off.

One of the main decision points I reached was choosing to use the Arduino Uno R3 instead of the Arduino Pro Mini. On the night before the critique, I managed to achieve a functional set-up of the device outside of the container using the Arduino Pro Mini, meaning the LED matrices responded properly to corresponding switch movements. However, after attempting to shove the components into the container, functionality ceased. I went into debugging mode and hooked up the Pro Mini to my computer to read Serial feedback. The Arduino Pro Mini had stopped correctly reading the digital inputs from the switch. I tried using different Arduino Pro Mini’s to no avail. On the cusp of giving up, my classmates proved to be an incredible source of encouragement, pushing me to continue with my project using the more reliable Arduino Uno R3 (while unfortunately sacrificing compactness in my design). The Arduino Uno R3 produced the proper Serial feedback for corresponding switch movements and I was able to proceed with my project. 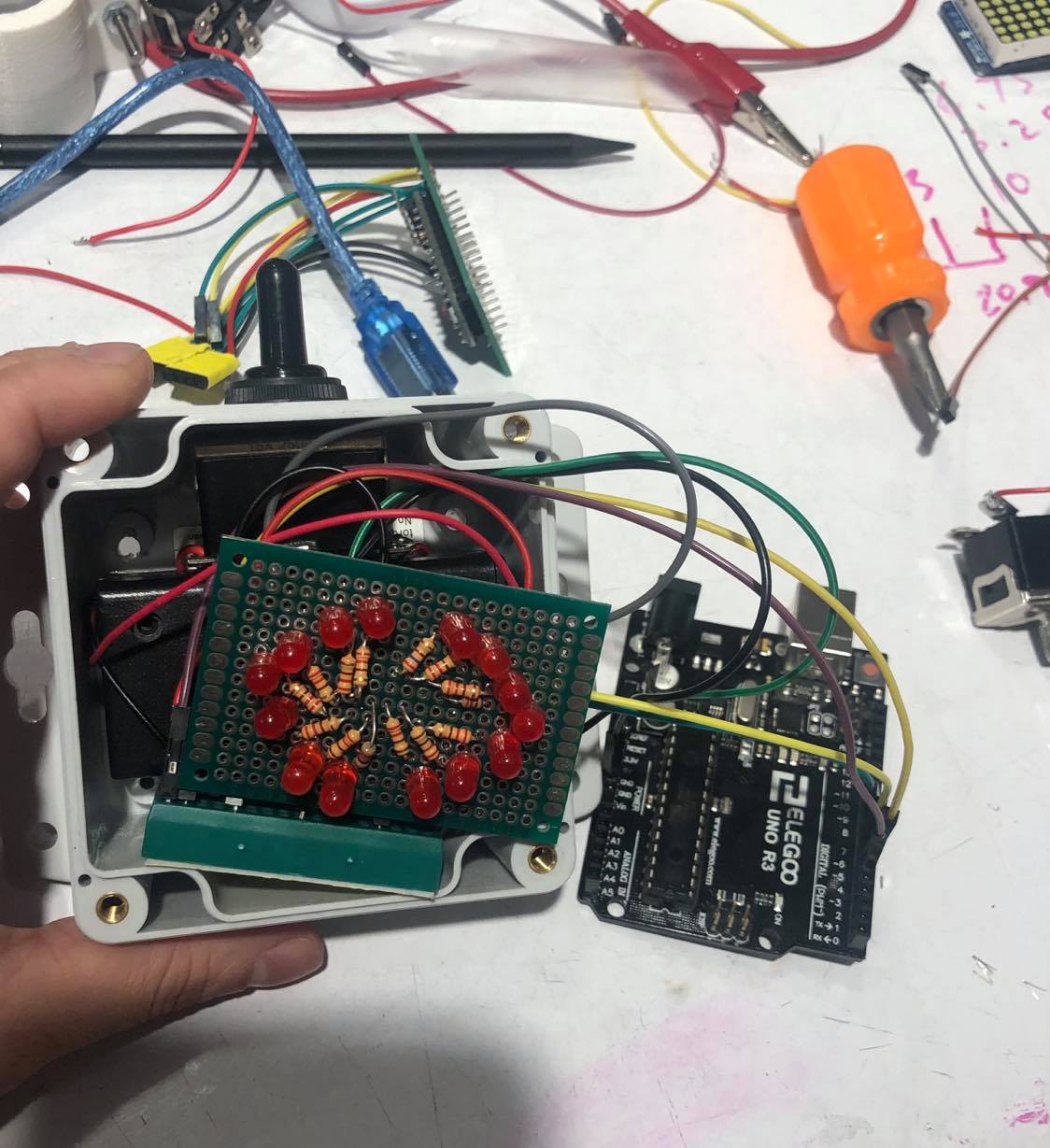 The larger, but more reliable, Arduino Uno R3 can be seen here hooked up to the device, in place of the Arduino Pro Mini.

Another significant decision point I encountered was choosing to create a DIY LED device instead of using two AdaFruit 8×8 LED Matrices. During the process of attempting to shove the components in the container, the Adafruit LED Matrices stopping illuminating in response to the switch movements. In trying to isolate the problematic components, I tested the LED Matrices individually using the Arduino Uno R3 and sample code provided by Adafruit (which previously worked as expected). I was dismayed to discover the matrices no longer worked. After a brief period of self-pity, my classmate, Zoe, was an invaluable resource in showing me how to hookup LEDs and resistors in parallel to create a set of LEDs! With her guidance, I was able to make a pseudo LED matrix consisting of two sets of 7 LEDs and 7 220 ohm resistors in the shape of left and right arrows on a protoboard. This component had surprising advantages in that it was much easier to code, brighter than the LED matrices, and took up less space in the container. 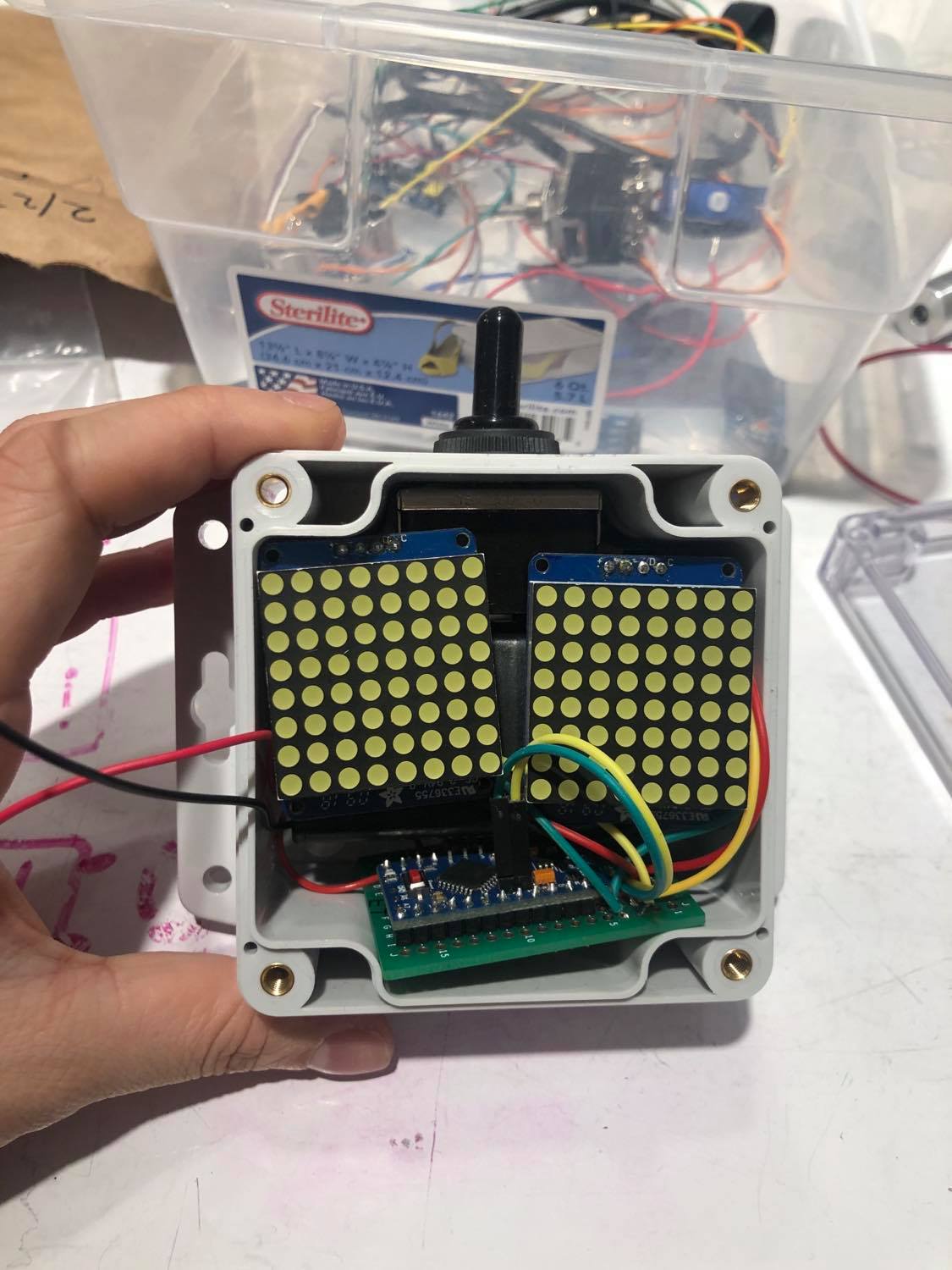 What the device would have looked like if I were to have used the Adafruit LED matrices, which unfortunately stopped responding to Arduino input.

Some aspects of my process I’d like to highlight are: 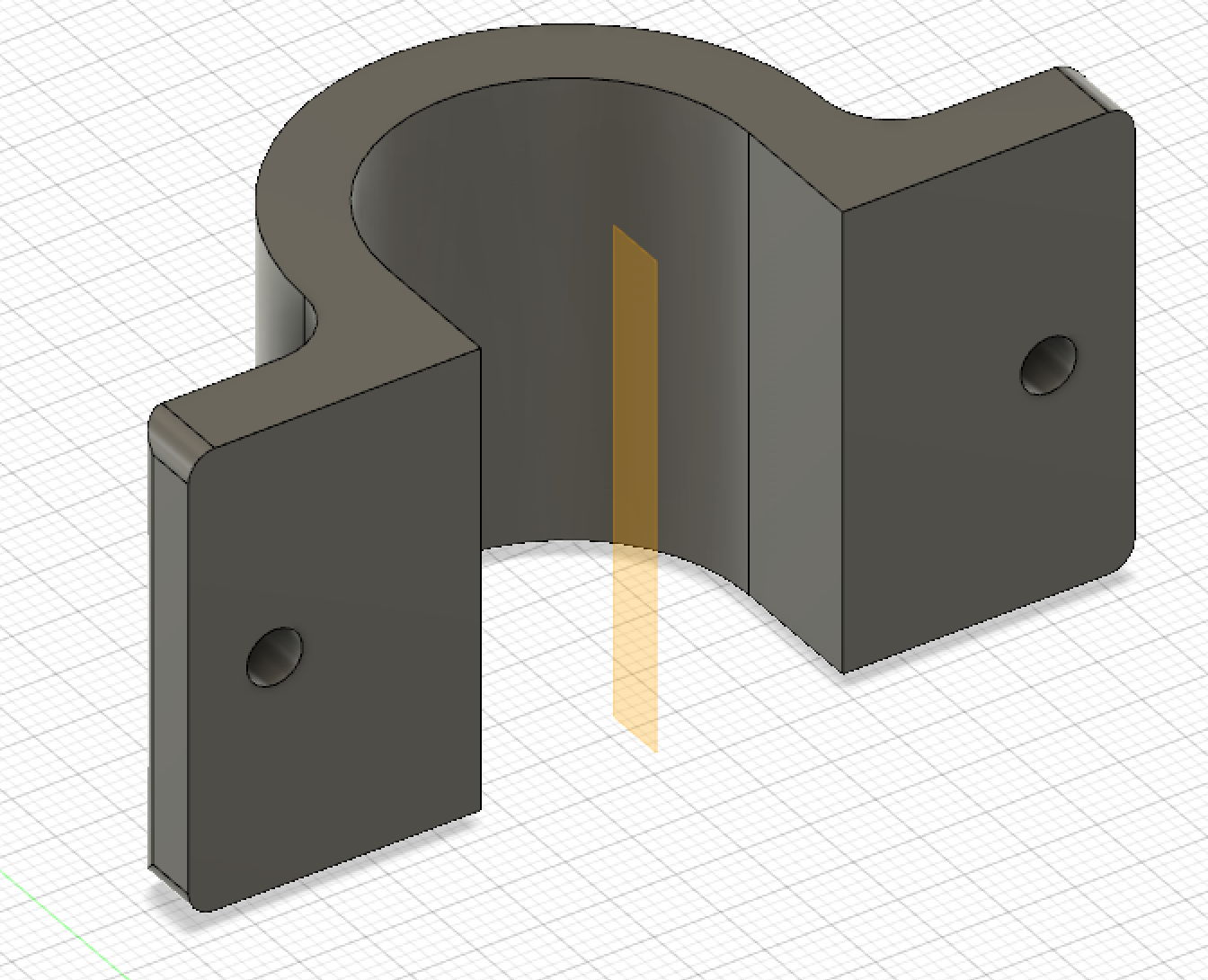 I created a 3D-model of the scooter clamp in Autodesk Fusion360. 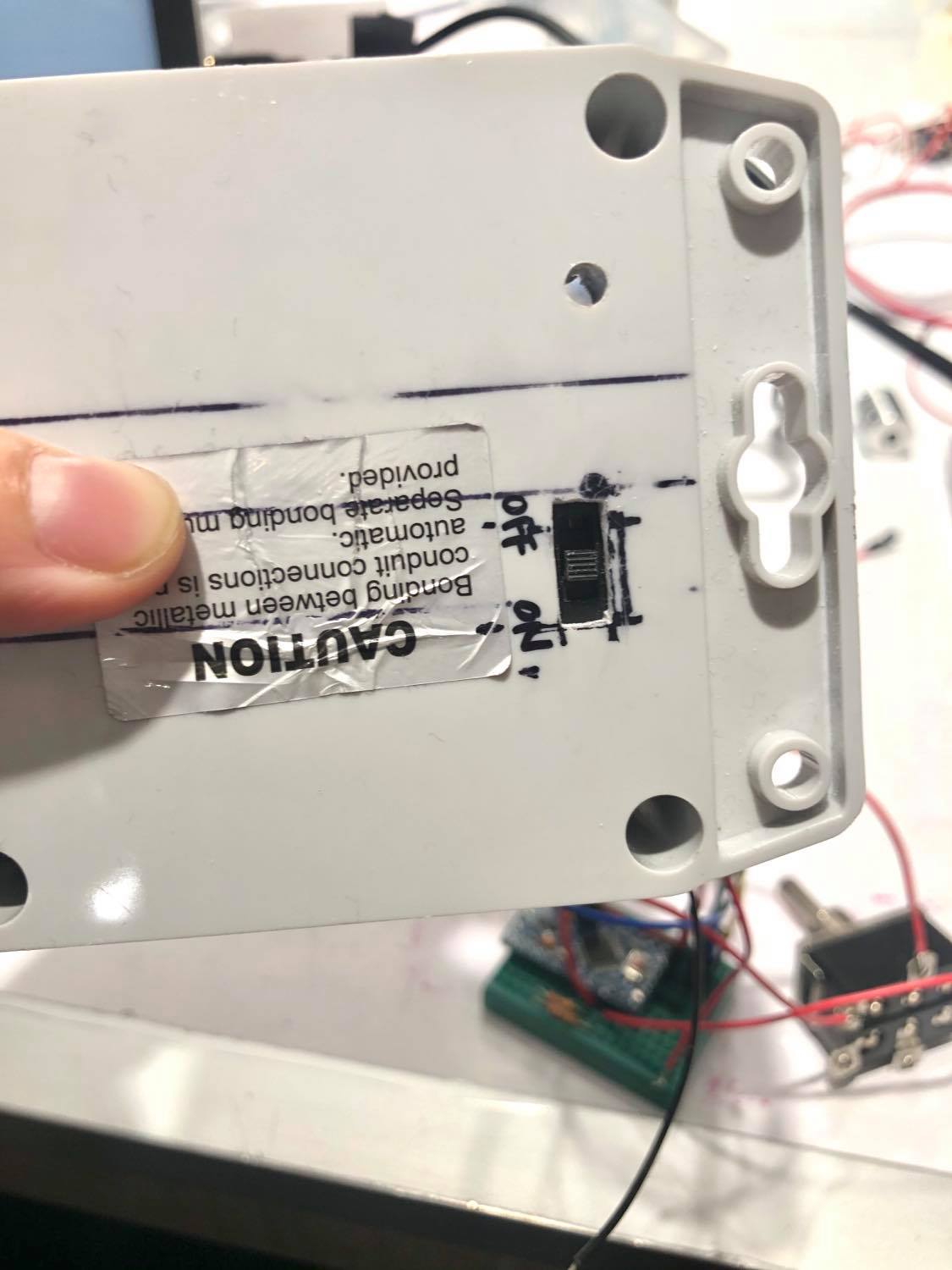 Precise measurements with a digital caliper and Sharpie marking on the container allowed me to accurately drill a hole for the battery switch.

Through the in-class critique, I was able to gain some useful feedback on both the positive aspects of my device and the aspects which had room for improvement.

One critique stated they enjoyed the overall design but posited that “maybe the arrows could be different colors.” This touches on the topic of how to make the left and right signals more distinguishable from one another. The main ways I could have accomplished this was through distance, shape, or, as suggested, color. My current design attempts to take advantage of shape, where each signal is an arrow of LEDs pointing to the left or right. The downside of this design choice is that it may lack clarity from larger distances. Using color as a distinguisher, however, also has the downside of there not being a universally-accepted association between colors and direction. Colors are usually known to correlate with “stop/start”, which could be unintentionally confusing for oncoming pedestrians. I think improvements on the current design would be: 1) sharpen the LED arrowheads, and 2) as suggested by Zach, add a line of LEDs as a body for the arrowheads. This design change would hopefully make the signals more clearly arrows while keeping the design central and compact by not choosing distance as the distinguisher.

Another critique commented, “Looks nice. Moving the switch closer to the handlebar would make it perfect.” I completely agree with this critique! Thankfully, the position of the device on vertical scooter pole is adjustable and by simply sliding the clamp and the device up the pole, the switch can be positioned so it is very close to the handlebars, and thus, the hands.

Overall, I was pleasantly surprised by the positive reception of my turn signals during the critique! If I were to self-critique my project, my main point of disappointment would be the loss of being waterproof. Since the basic electronics and software of this device was fairly simple (involving only four components: switch, battery, Arduino, LEDs), one of my main focuses for this project was its design, in regards to both compactness and waterproof-ness. Using an Arduino Pro Mini, I was able to fit all the pieces into the case (albeit, quite snugly), but, unfortunately, I was unable to get the Arduino Pro Mini to consistently read the switch’s signals correctly. This forced me to go with the more reliable Arduino Uno R3 and, thus, compromise the waterproof feature of my device.

Although my project fell short in some aspects, I am enormously proud of the adjustments I was able to make throughout and definitely learned a lot about the engineering process.

Troubleshooting when the device didn’t work was one of the hardest parts of this process. After getting the switch and LED matrices to successfully work together on the Arduino Uno R3 and the Arduino Pro Mini using a breadboard, I made the mistake of sautering on all the parts to a protoboard at once and then finding out that the LED matrices were no longer turning on. I learned that in the future, I should take on a much more iterative approach, especially when it comes to steps that are hard to reverse, like sautering. This oversight cost me a lot of time, having to go back and forth between the Uno R3 and Pro Mini while trying out countless different combinations of switches, wires, pins, and matrices.

Another thing I learned was that I really enjoyed the fabrication process! I had a lot of fun 3D printing the custom clamp piece for the scooter, as well as drilling precise holes into the case for the switch and power switch. I felt I had more control and awareness of what I was doing when customizing the materials, as opposed to when dealing with the somewhat mysterious world of electronics.

If I were to build another iteration of my turn signals, I would take another stab at making the device waterproof by using the Arduino Pro Mini and a protoboard, making sure to test one component at a time after sautering. Some interesting additional features to add to the device would be: a) a third mode which blinks both lights, to simply act as lights for night time “scooting” and b) a charging port for the battery. 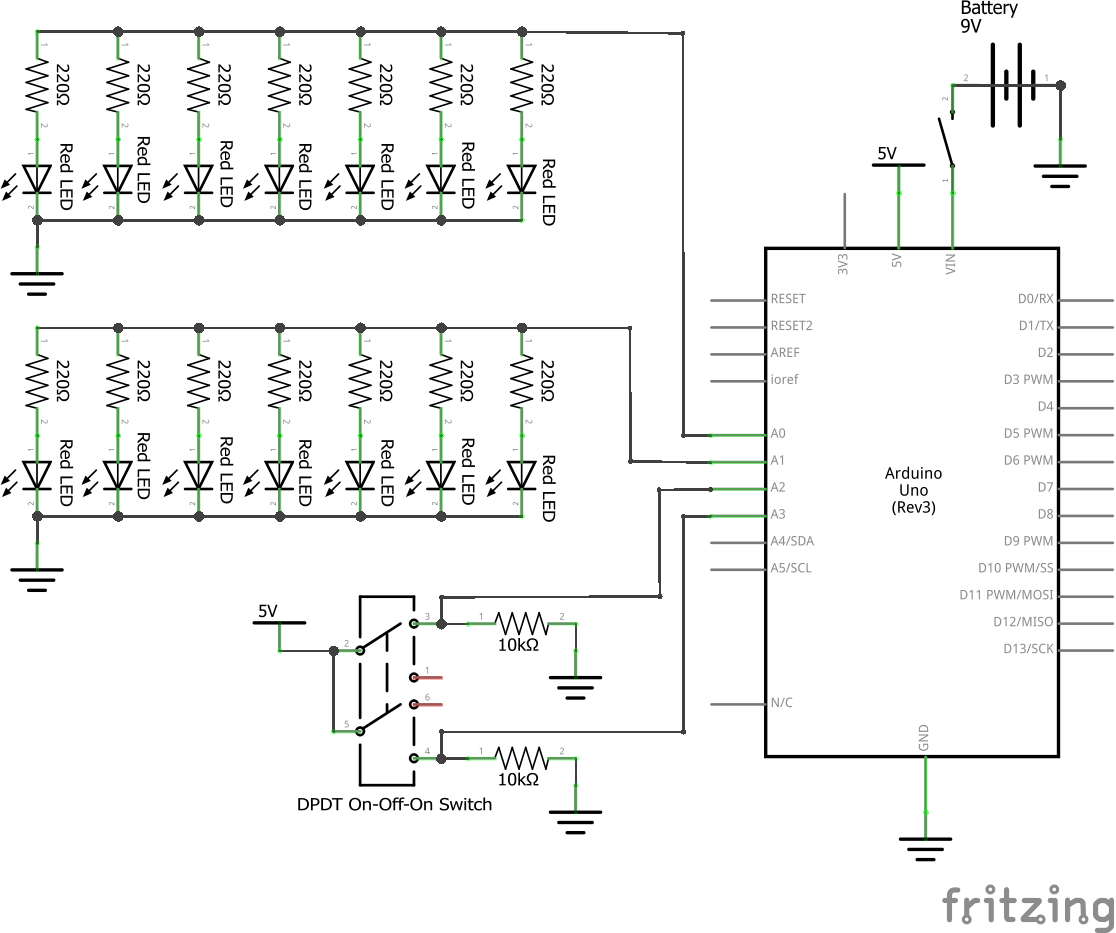 Schematic of the Turn Signals deivce