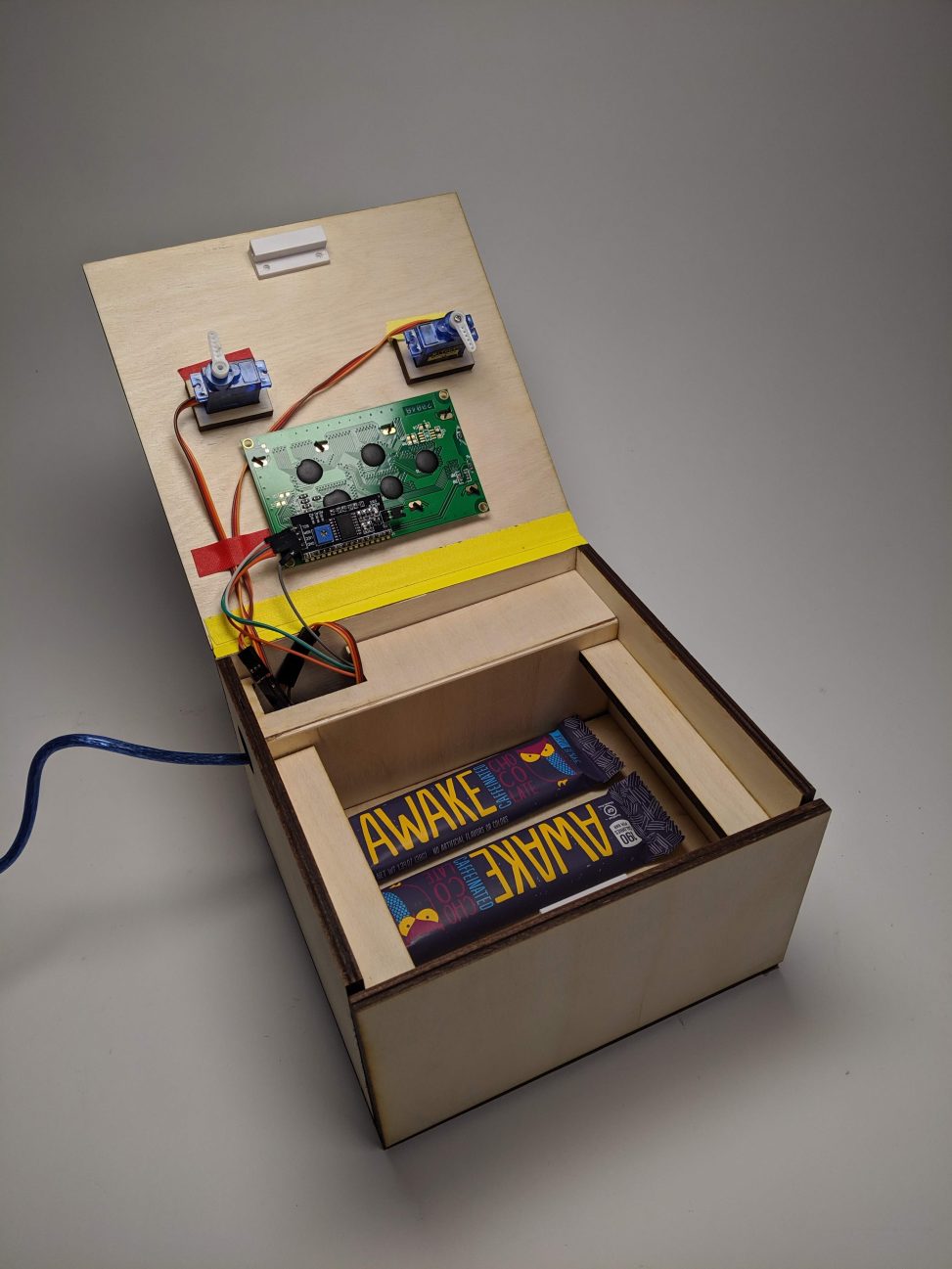 Note: The feature image is not ideal and I would have liked to take a picture of both the stop snac-ing box and the habit helper box.

Over the last few years of college, I have been very dependent on caffeine where I would get headaches and become highly unproductive when I do not get my daily caffeine fix. Having caffeine was not a big problem until it affected my health and increased my heart rate a little too much.

Given that I am in my last semester of college, I wanted to reduce my caffeine dependency. My main form of caffeine intakes are ice soy lattes and caffeinated chocolate. I could usually control how many ice lattes I consume, but have had troubles limiting how many caffeinated chocolate I eat. (mainly because the caffeine doesn’t kick in as quickly)

Note: I do not have detail photos for habit helper and images of users using both stop snac-ing and habit helper. 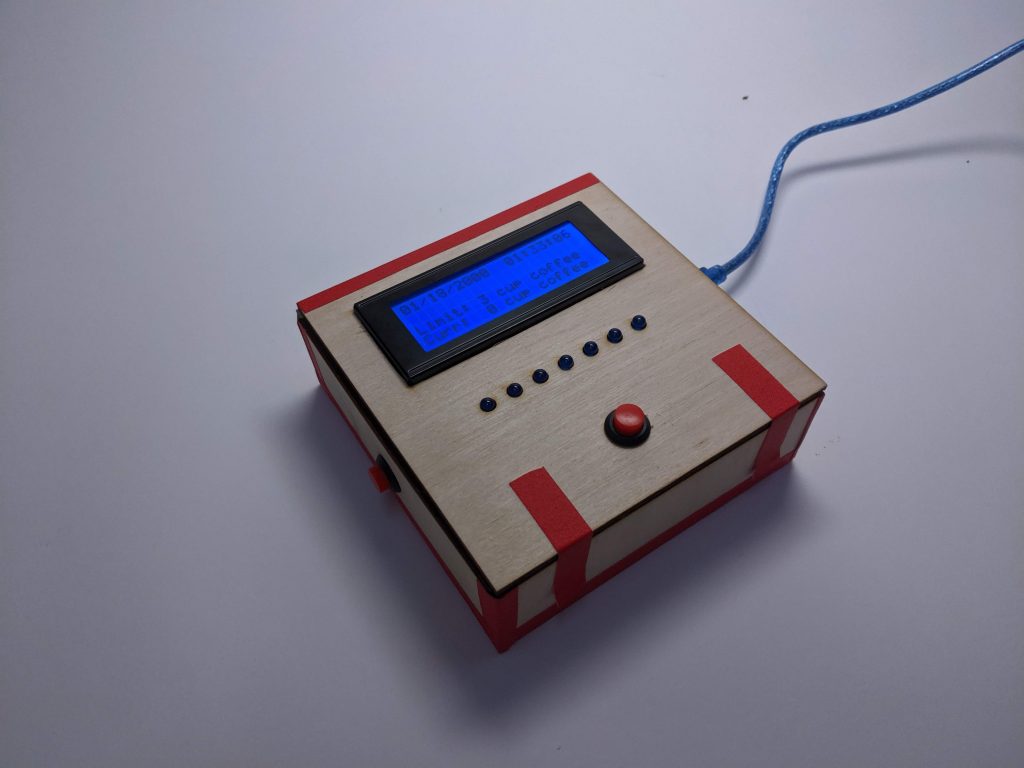 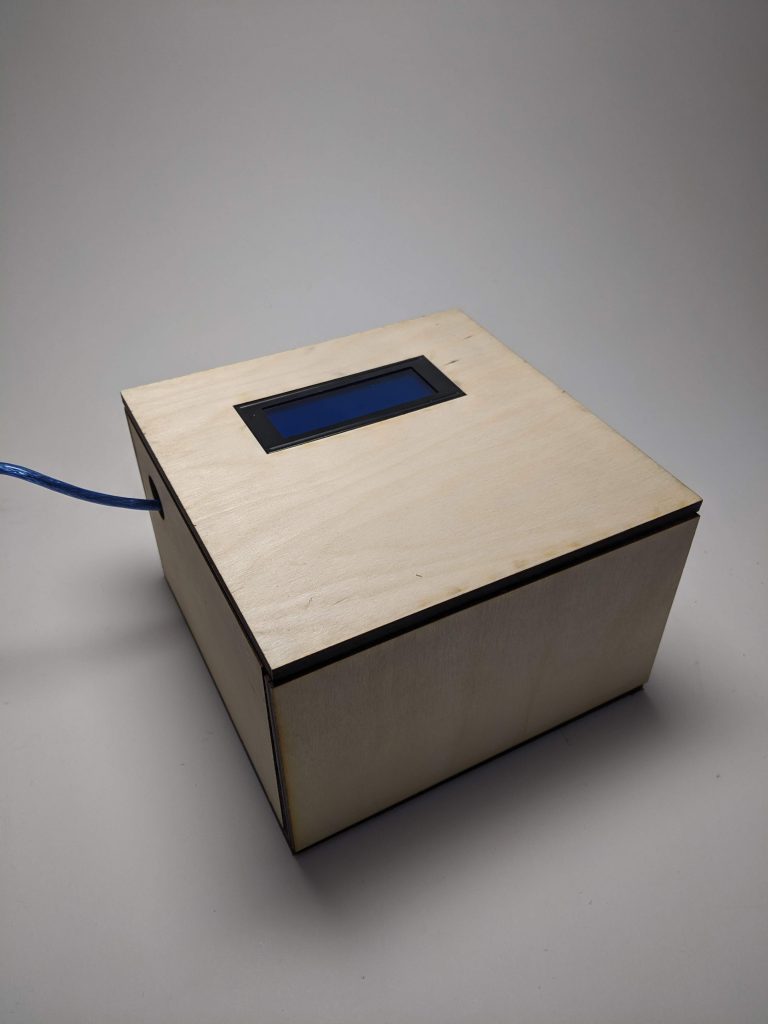 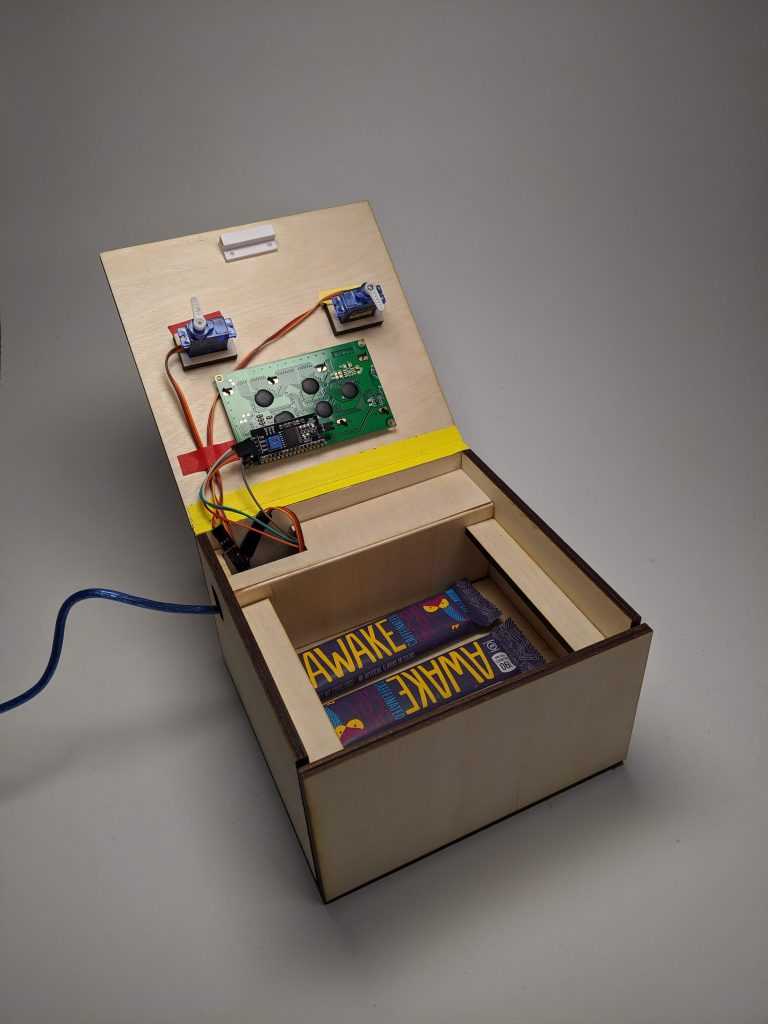 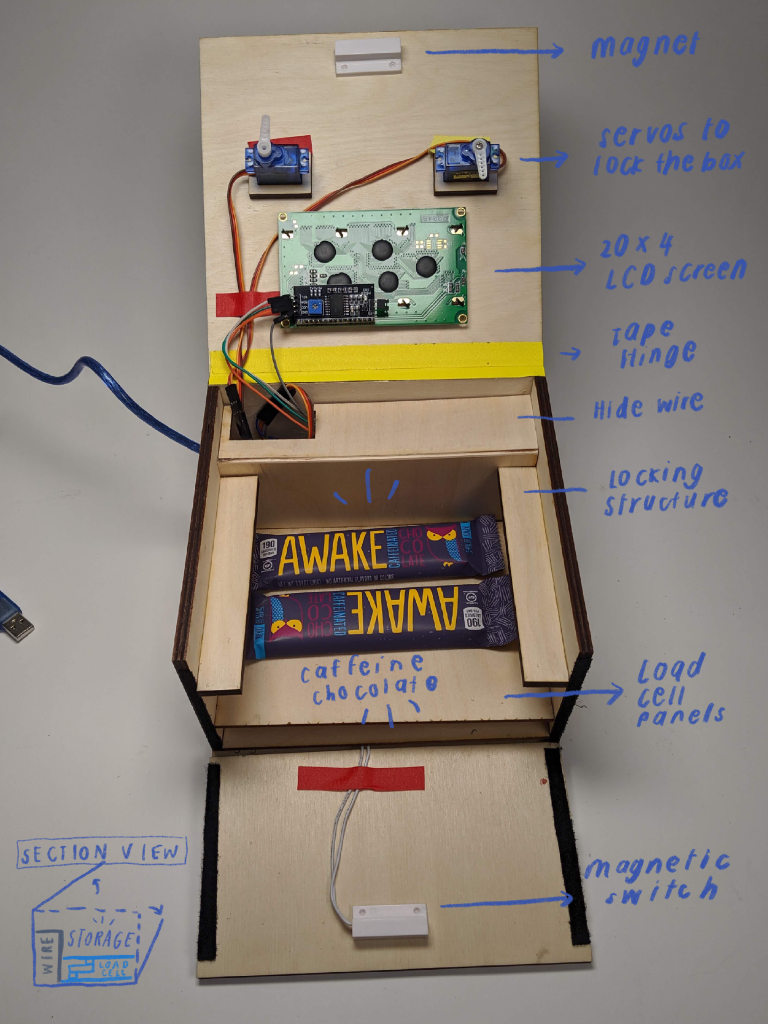 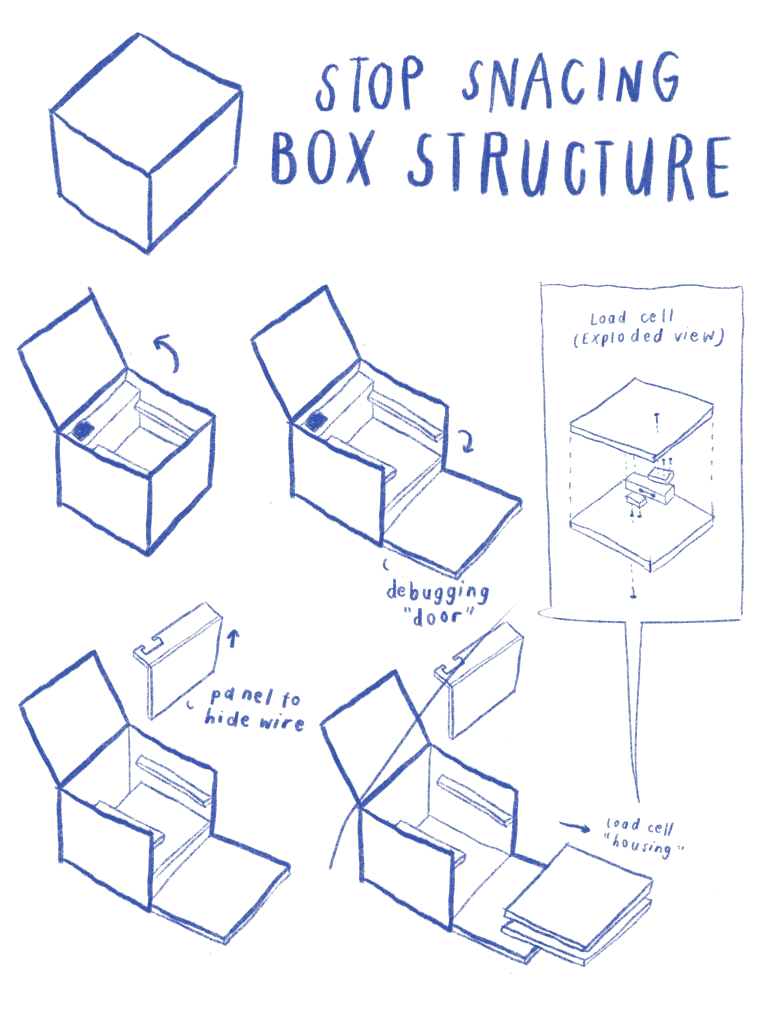 Note: I was not able to take a full video of the different functionalities of both products before spring break and this is the closest I can get to a video.

One of the problems I faced when working on stop snac-ing is the ability to use the load cell. 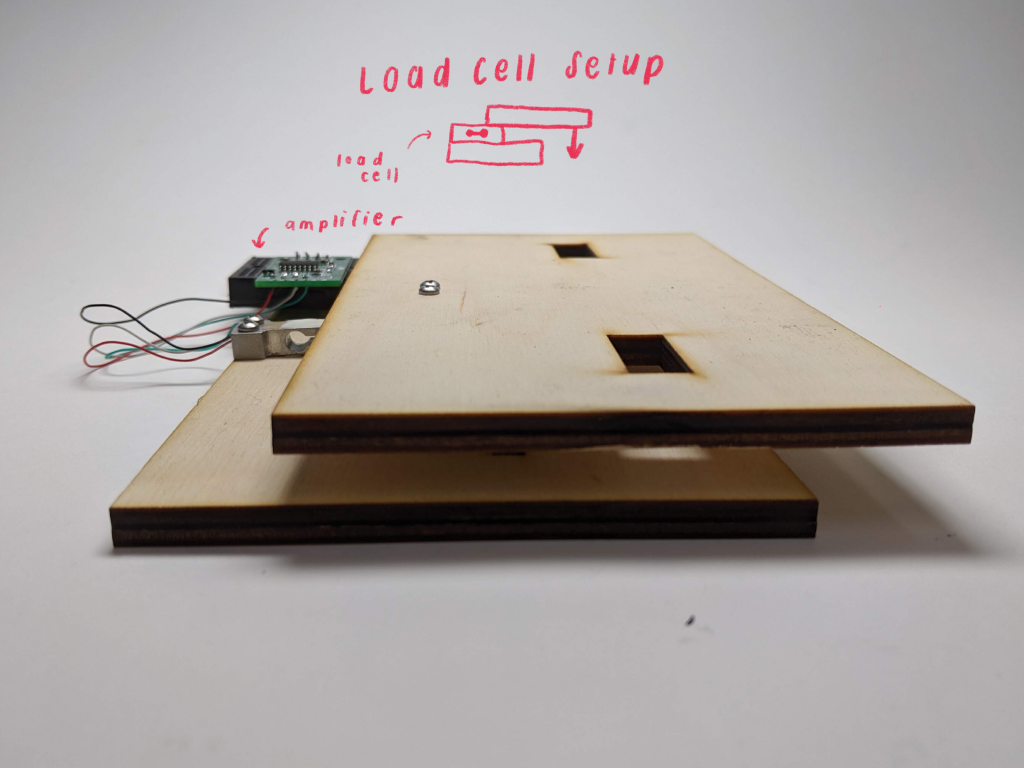 I was only able to obtain a 300g load cell the week before the deadline and was able to do some initial testing of the product before incorporating it into the actual box. 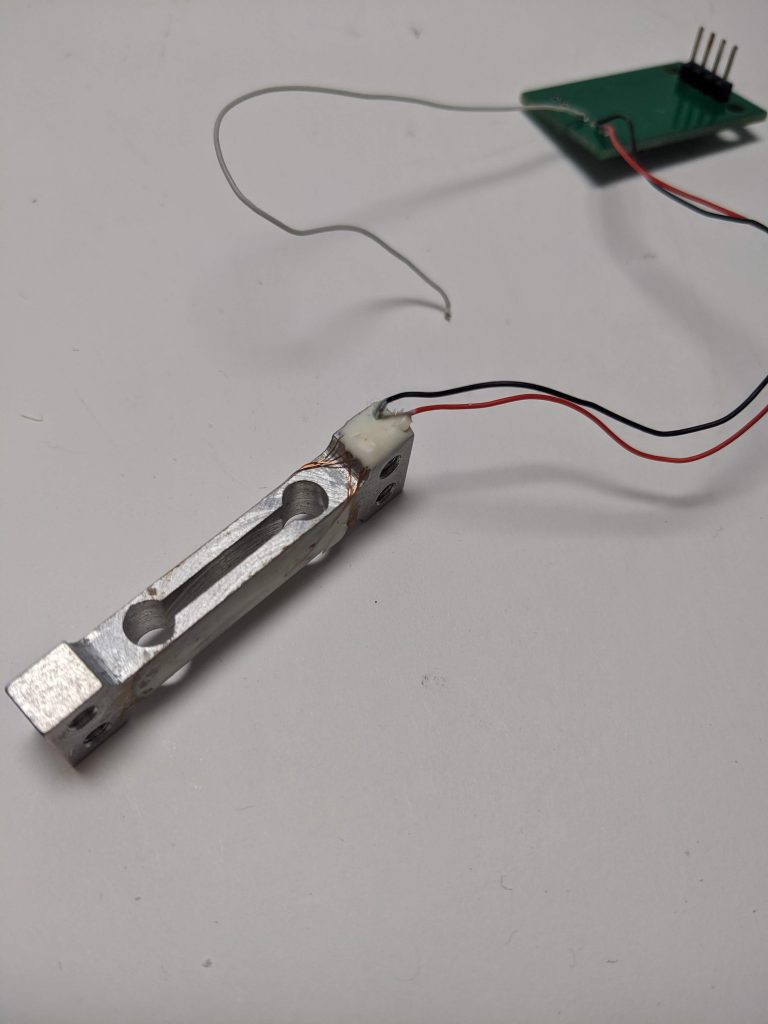 However, in the process of incorporating it into the actual box, one of the wires connected to the load cell broke since it was really thin and fragile. Attaching the wires were really hard since it broke within the glue area, which was why I decided to order an extra load cell, but 750g this time, in the hopes that the wires are stronger. Since it was cutting close to the deadline and the load cell was a key part of the project, I decided to incorporate another idea I had to this project. 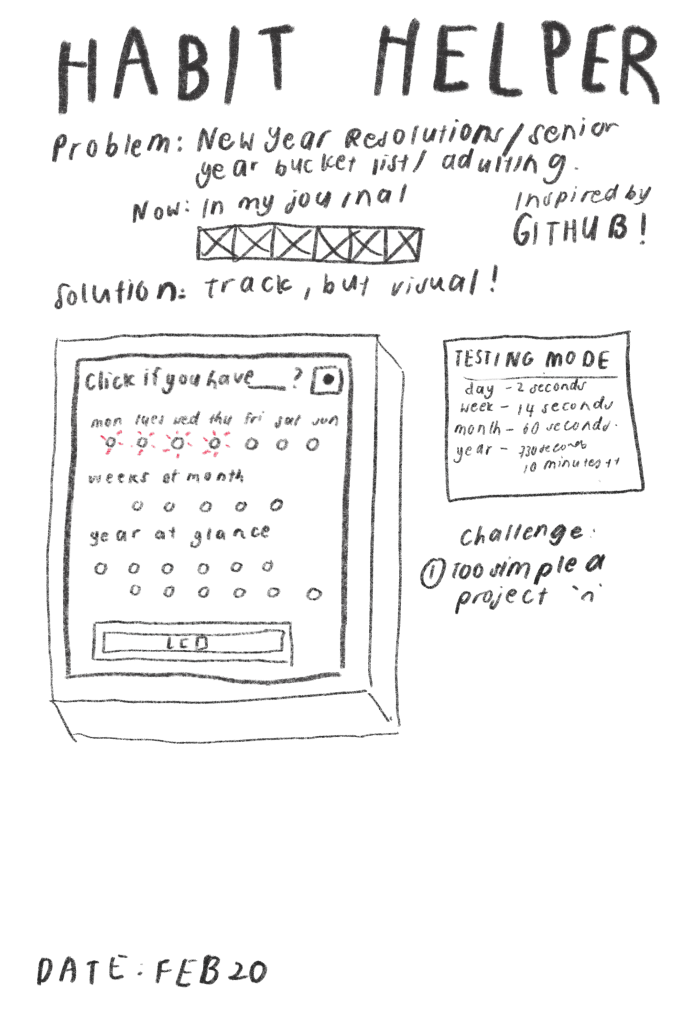 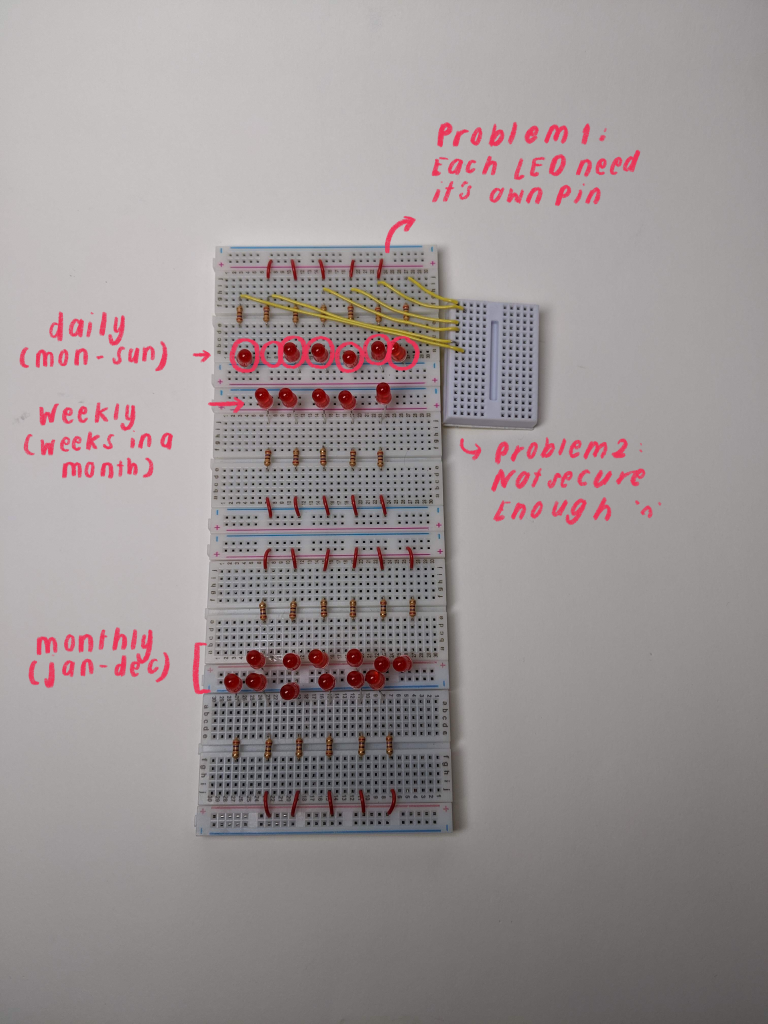 When laying out the LEDs on the breadboard, I came across the problem where it would be very difficult to have the LEDs be of a height higher than all the components.

This is why I decided to not use breadboards and start using protoboards instead. 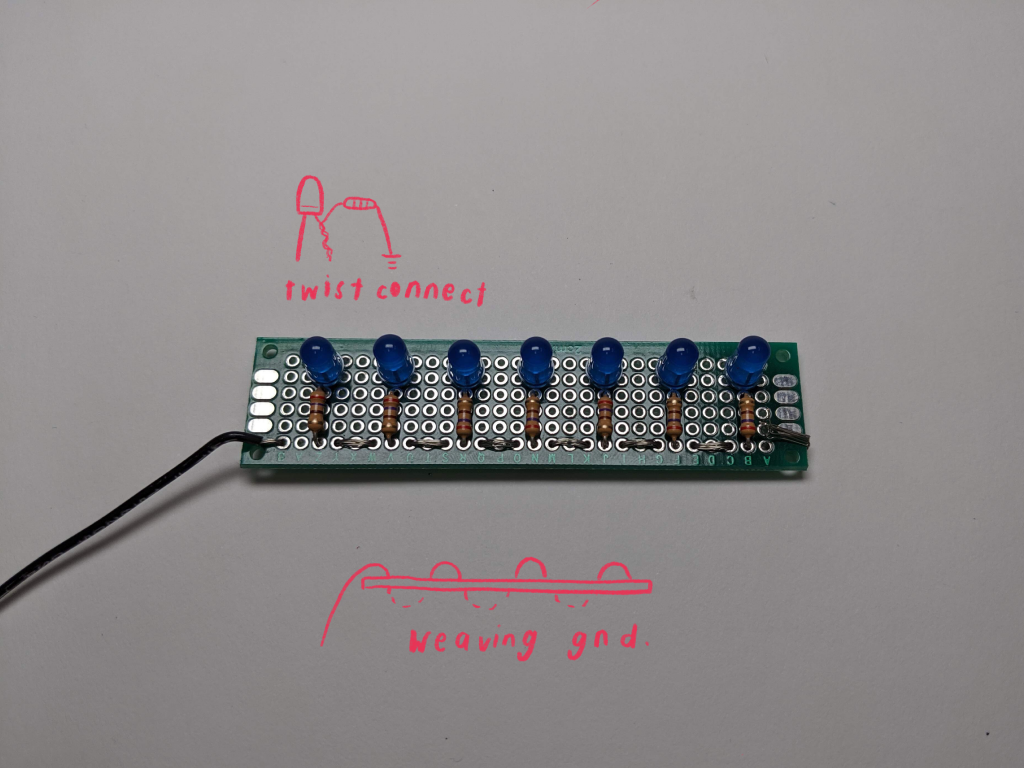 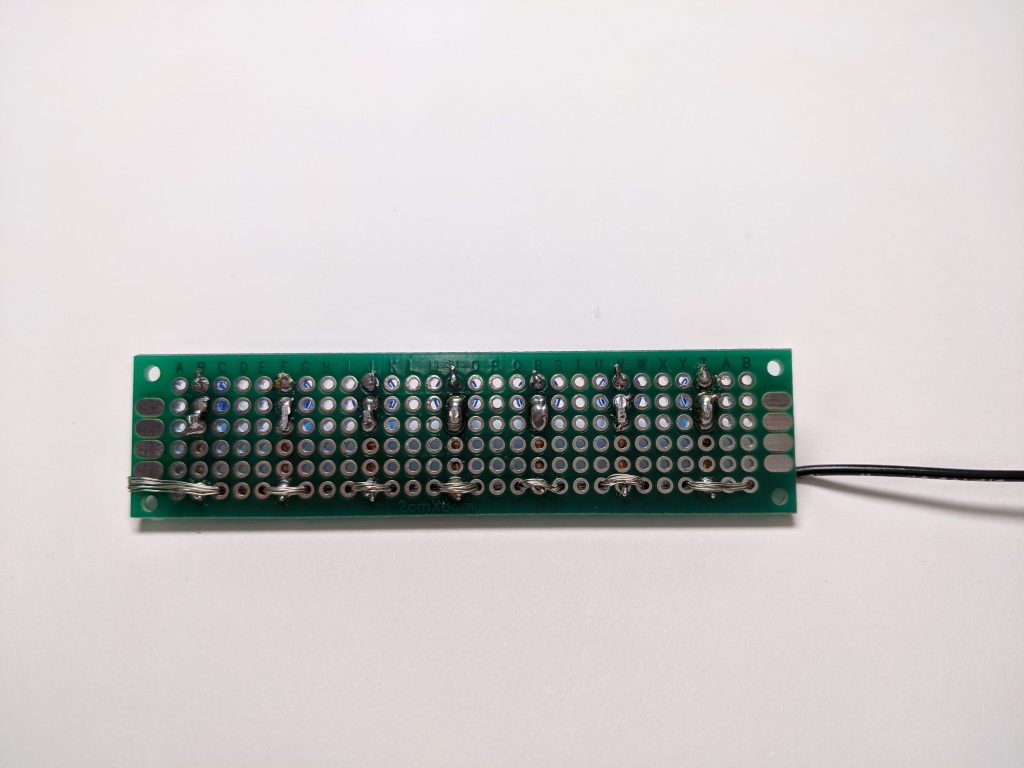 In the process of writing the code for the habit helper, I found that the logic was slightly complicated, like whether a weekly light should be turned on and how to deal with months with different number of weeks.

I decided to spend more time on the creating the physical box instead of spending more time on the software since half the assignment is on the aesthetic of the boxes. This was why I decided to scale down habit helper by only keeping track of habits for a week rather than for an entire year.

My initial locking mechanism consists of two servos on the lid of the box and two slit faced cuboid in the front section of the body of the box. 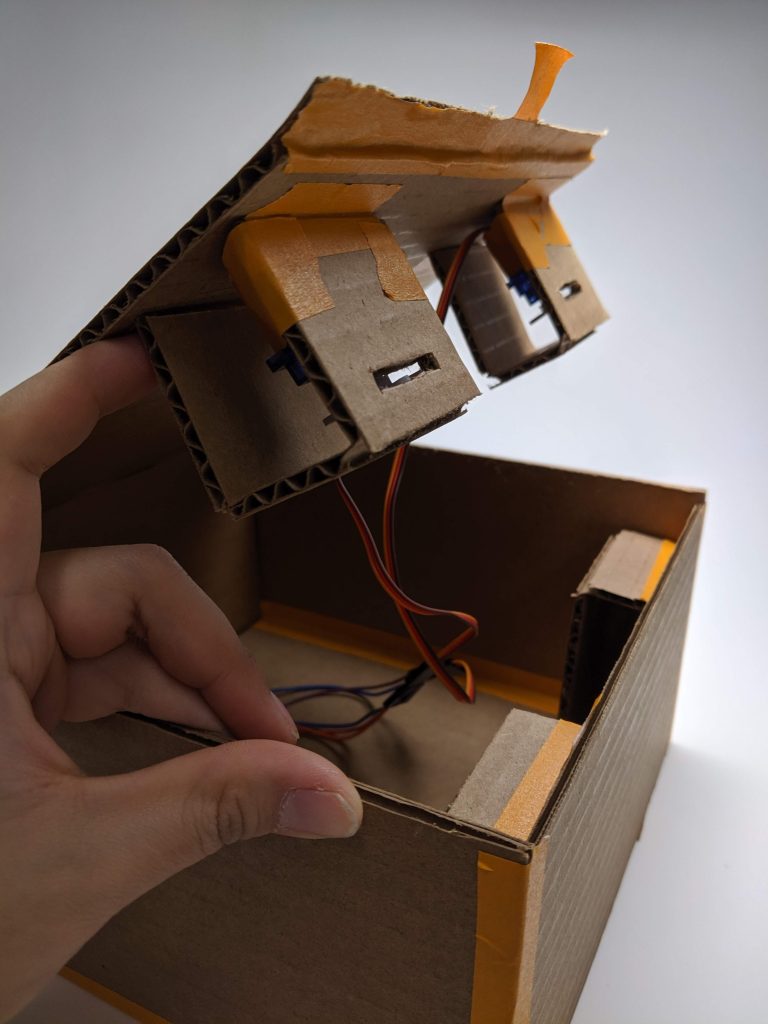 However, upon prototyping and testing it out on wood, I realize that it was not very secure. I decided to change the locking mechanism by having two ledges on the left and right of the body of the box. The two servos will remain on the lid of the box and would hook onto the ledge when locked.

Note: this is not an ideal image to show the locking mechanism. I was hoping to be able to get a view of the lock with the front “debugging” panel open. 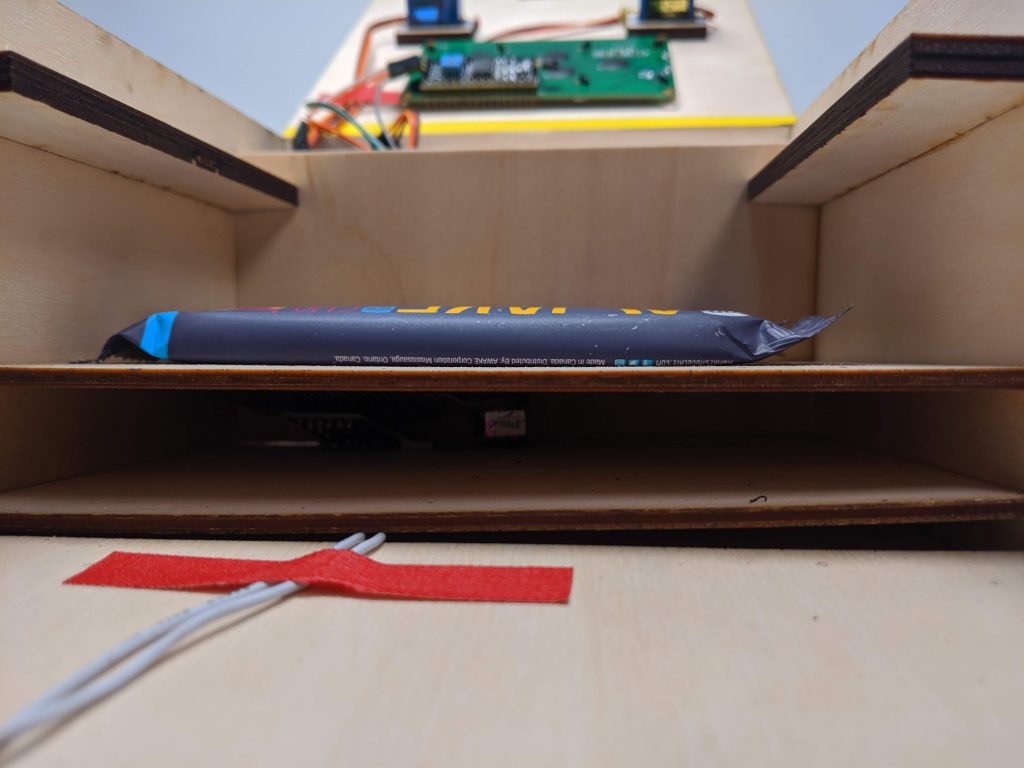 This locking mechanism is much stronger than the initial design, but is still not perfect. This was when I decided to add a magnetic switch to the lid of the box to check whether the box is opened or closed. When the box is ever opened when it is not supposed to, the buzzer would then buzz until the box is closed.

The video below shows the demo of the software for habit helper. In the video, the weeks do not reset.

This next video is the updated software code, where the weeks would reset 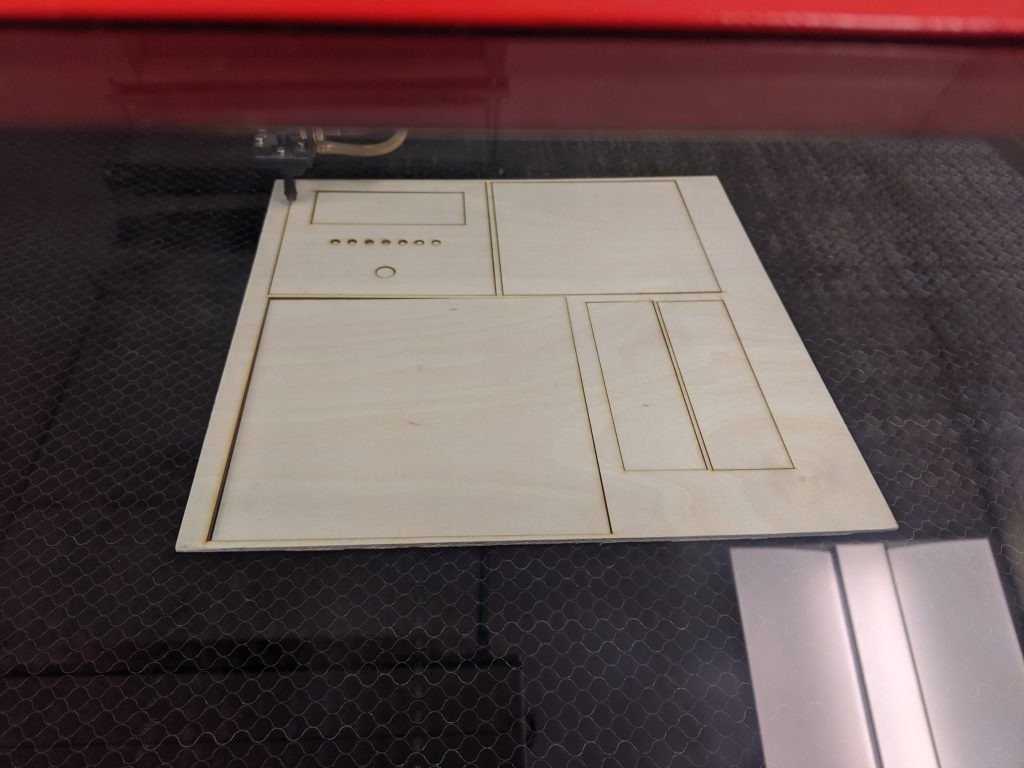 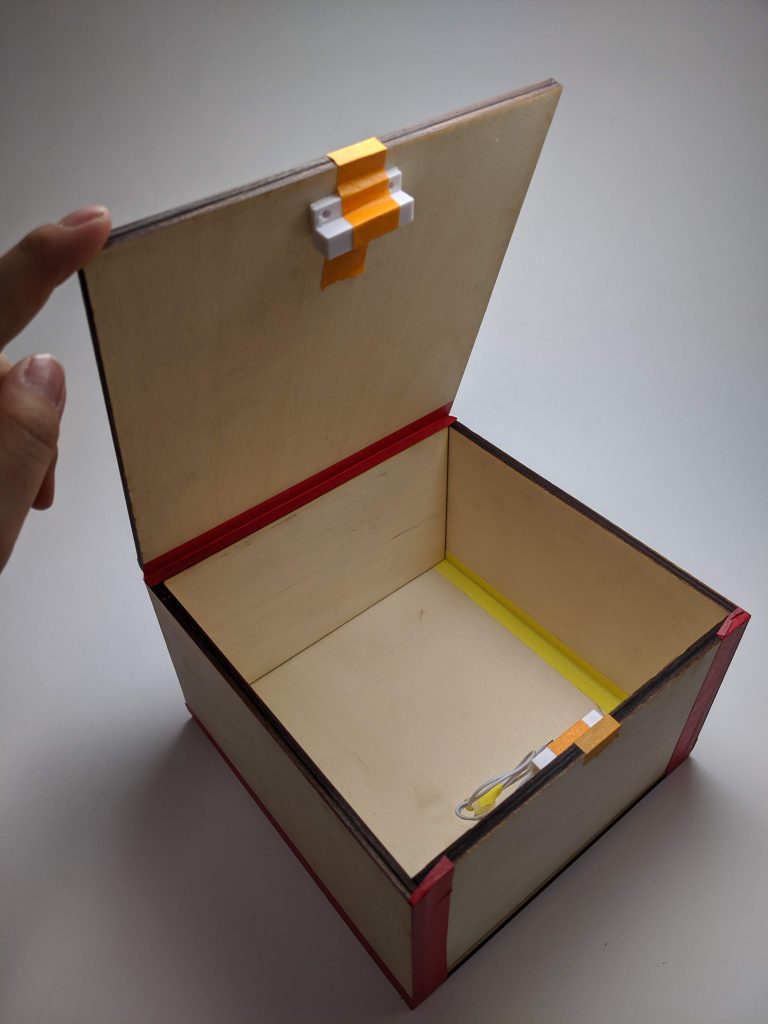 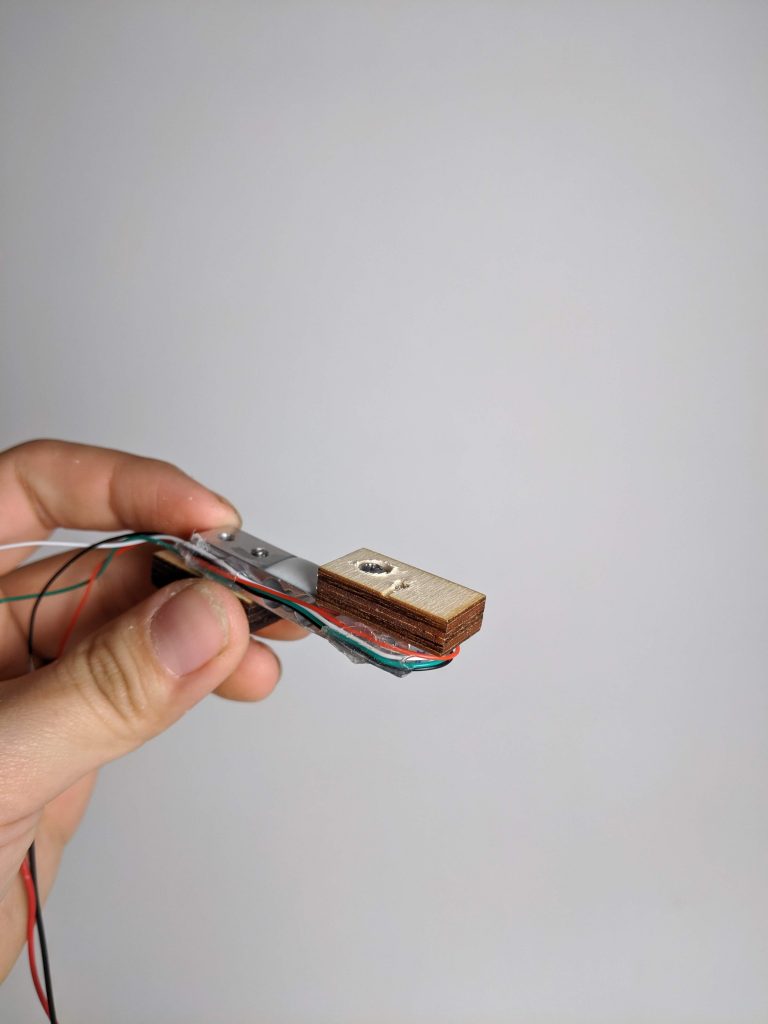 ensuring that the screw is flush to the wood piece 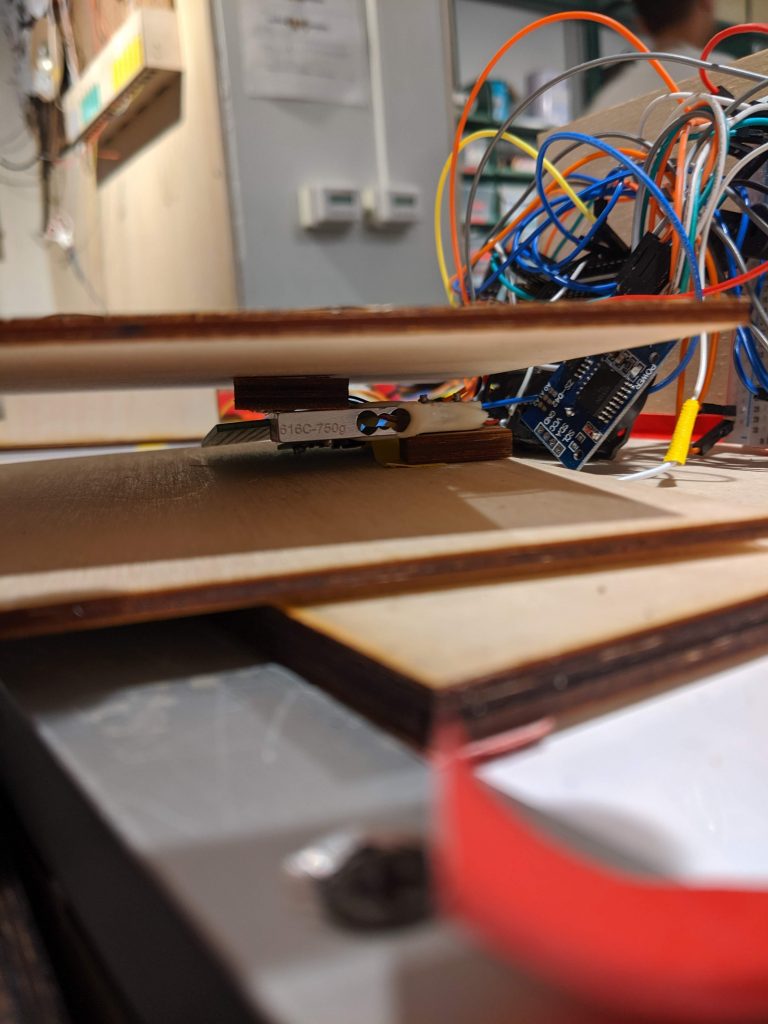 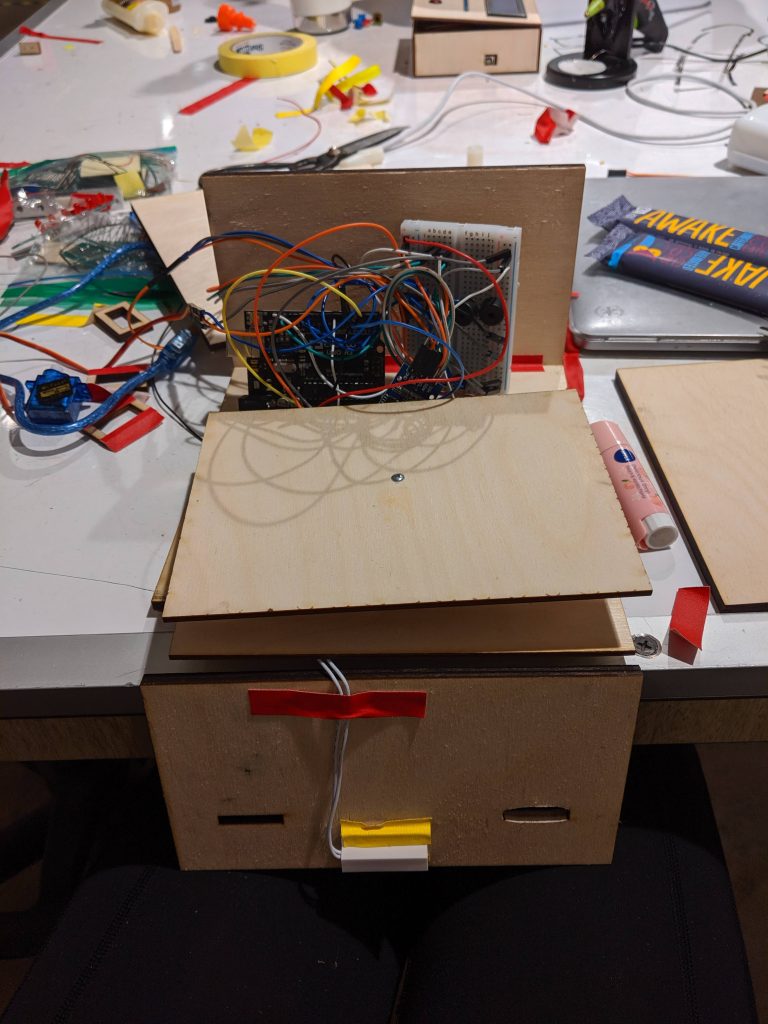 One suggestion I had was “a dispenser system” which “can better control the daily intake”. I think this is a really good idea and would be mechanically a fun challenge to take on. However, I feel that it would encourage me to constantly get my caffeine fix even if I don’t need it. In the case of the box, I want to be able to have a window to have caffeine if I need it, but since the box is always shut, it would tempt me less with the caffeinated chocolates. In the future, I want to be able to create a smarter way to control caffeine chocolate intake by making the duration to the next box unlock slightly longer if a bar of chocolate is taken.

Another critic I had was the problem when a user “forget(s) yo press the button or lie that (they) didn’t”. This is definitely a problem that would arise where users would fake the data. I guess self discipline is needed by the users who use the product. After all, the motivation to cut down caffeine has to be there in the user in the first place and devices can only be there to assist in them achieving their goals.

One verbal comment I got that I agreed with is the devices being the stick of the carrot and stick approach. Instead of rewarding users for not drinking caffeine, the LED lights up to “haunt” the users for drinking caffeine. It would be better for for habit helper to light up at the end of the day when the user drinks less caffeine than the set amount.

Overall, I am pretty happy with how the project turned out. I think it was really nice that the second load cell got delivered before the deadline so I could incorporate them into the project.

One goal I had as I was working on my homework and project one was dealing with many wires and figuring out a way to minimize jumper wires.

In dealing with wires, I had two main rules:

In terms of the color of wires I used, I came up with a color system for better organization:

With this system in place, I felt that I was better able to achieve my goal of organizing my wires. This also made it easier to debug when I have a problem.

Using cardboard to prototype took way more time than I expected. This was because as I was creating my prototype, I was not very familiar with laser cutting tools and felt that I would have to use cardboard as my final product. This was also why I actively tried to make the box as seamless as possible where the corrugated edge of the cardboard would not be seen from the outside. Since this requires more precision, it increased the amount of time needed to complete.

I was really surprised how much time it took to complete the project and found myself going through many iterations just to get simple mechanisms like the locking of the box working. With the use of laser cutter, my iterations could have been so much faster as compared to if I were to cut pieces of cardboard out.

If i were to build another iteration, I would work on the hinge of the boxes. I was not able to find a hinge that would allow my box to be opened and closed in a way where there isn’t a gap, which was why i decided that using duct tape was my best bet. Another thing I would work on would bee to reduce the amount of exposed cross section of the wood pieces and have the edges be more seamless. 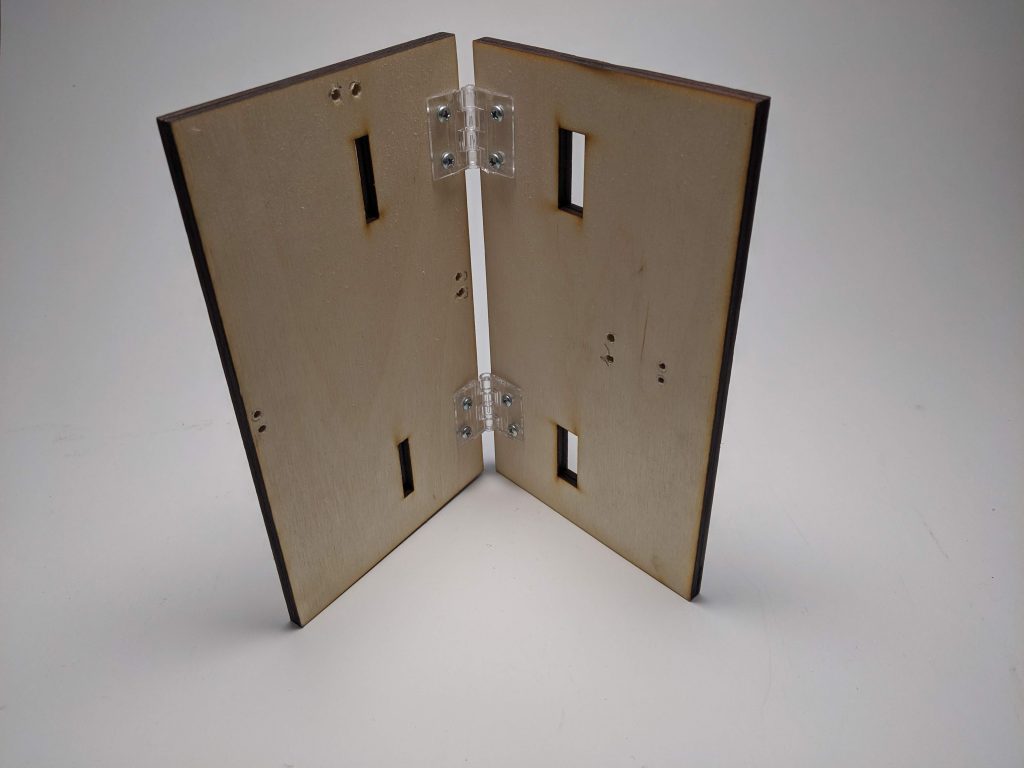 In terms of the software code, I would enable more customization from the box itself and not from the code so that users would be able to change their preferences without having to mess with the code. 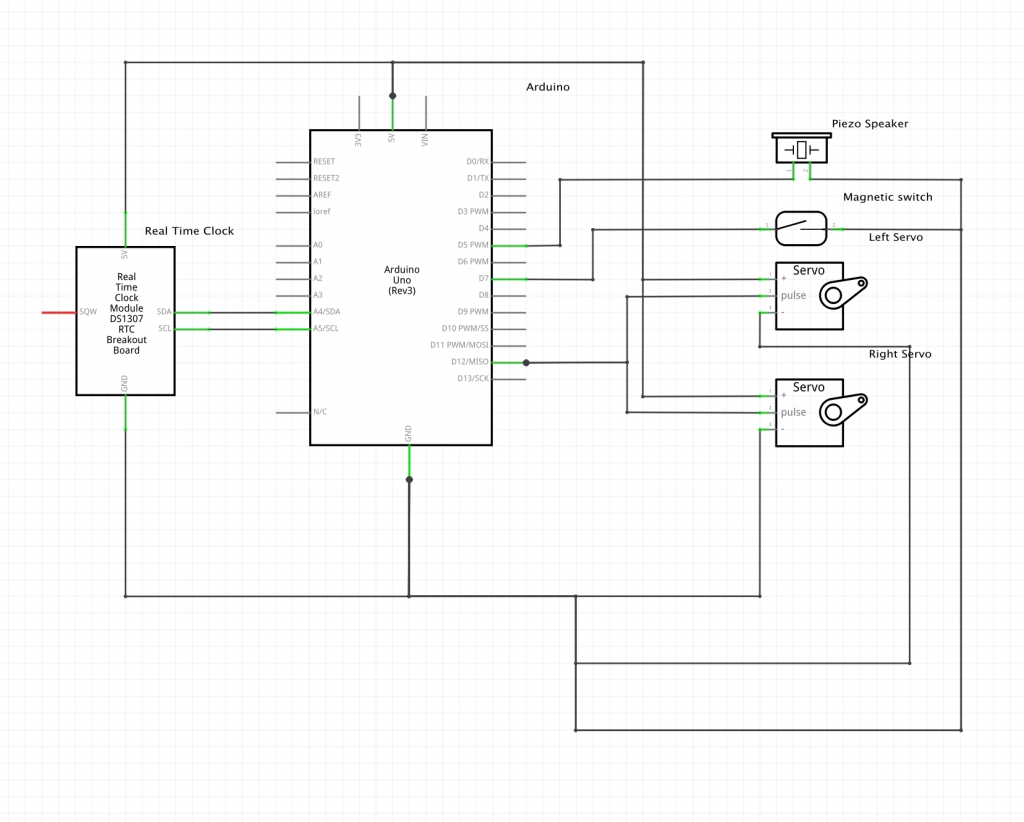 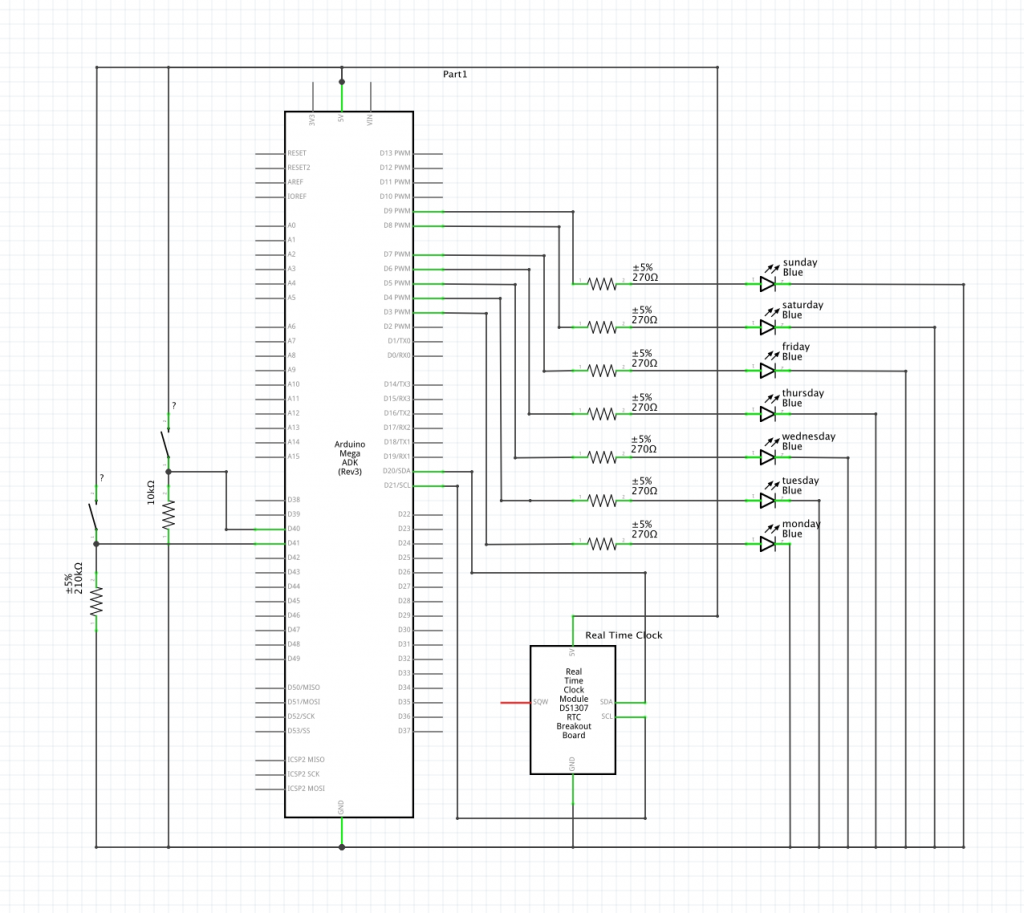