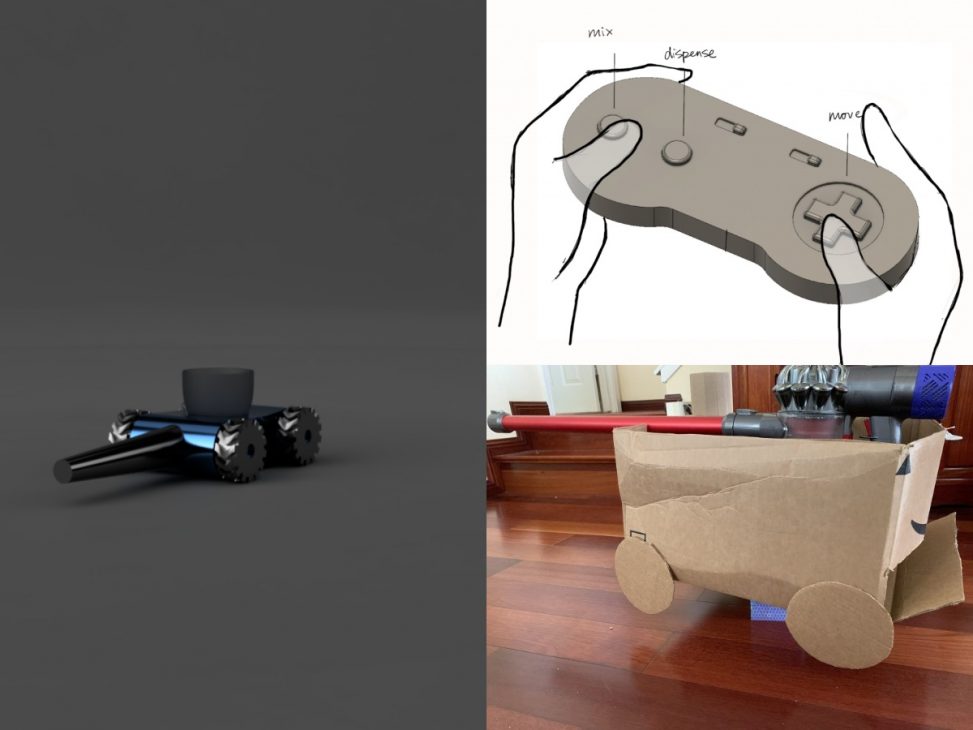 This prototype was designed to answer the following questions:

This looks-like prototype was built with cardboard and tape. The leaf-blower is represented with a vacuum and the blender and moss-dispensing tank is slanted downward. 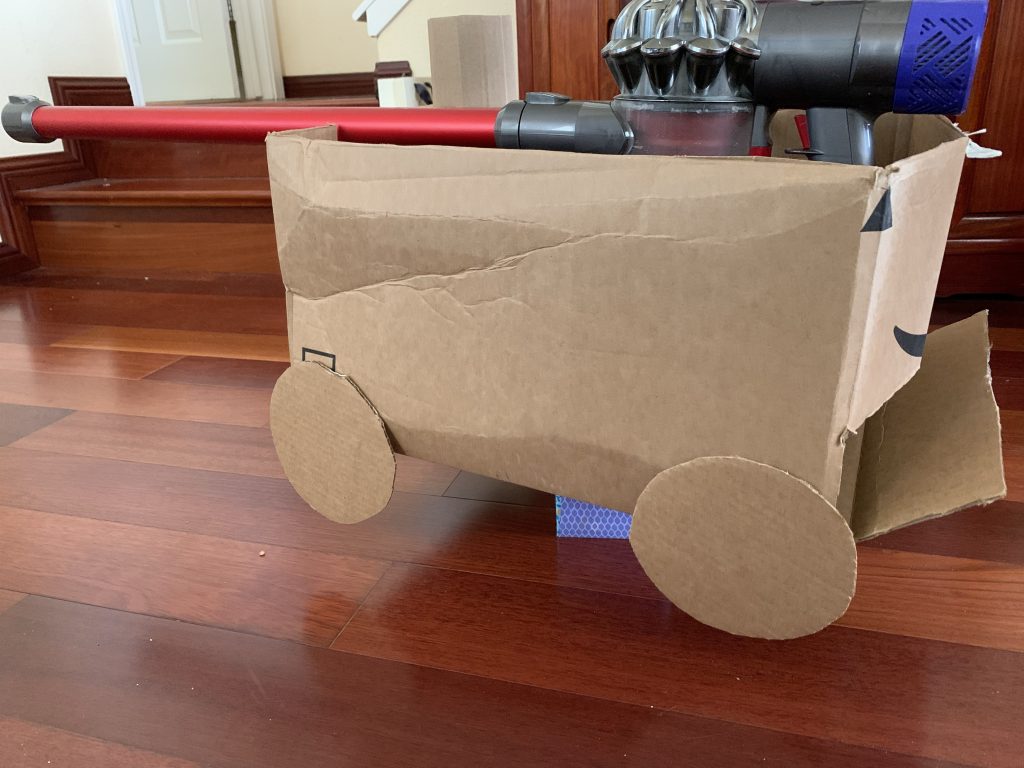 Overall view of the car from the side 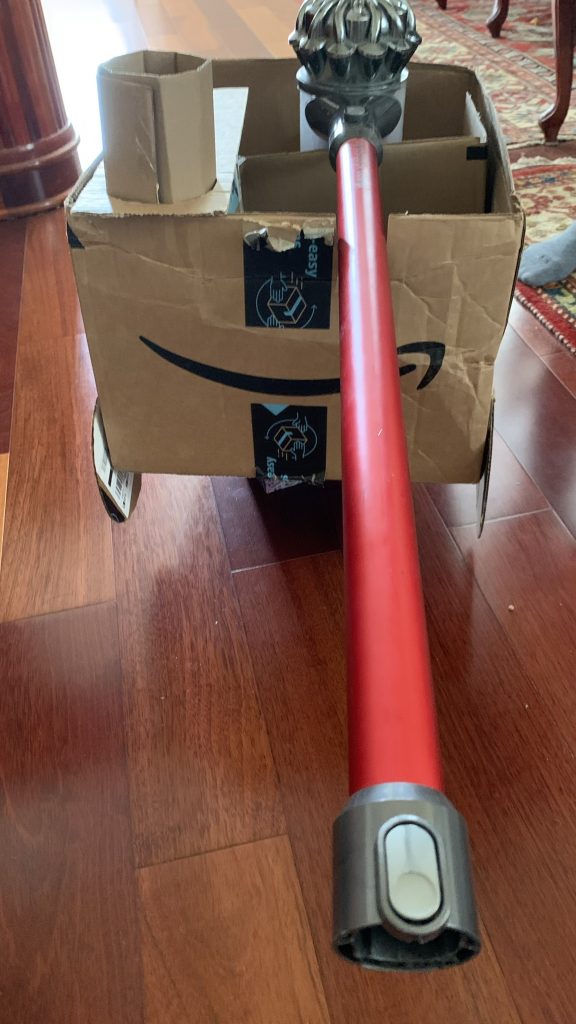 Front view of attached cordless leaf blower, while getting feedback from my sister

A door opens in the back when user presses button on remote control to dispense moss mixture. 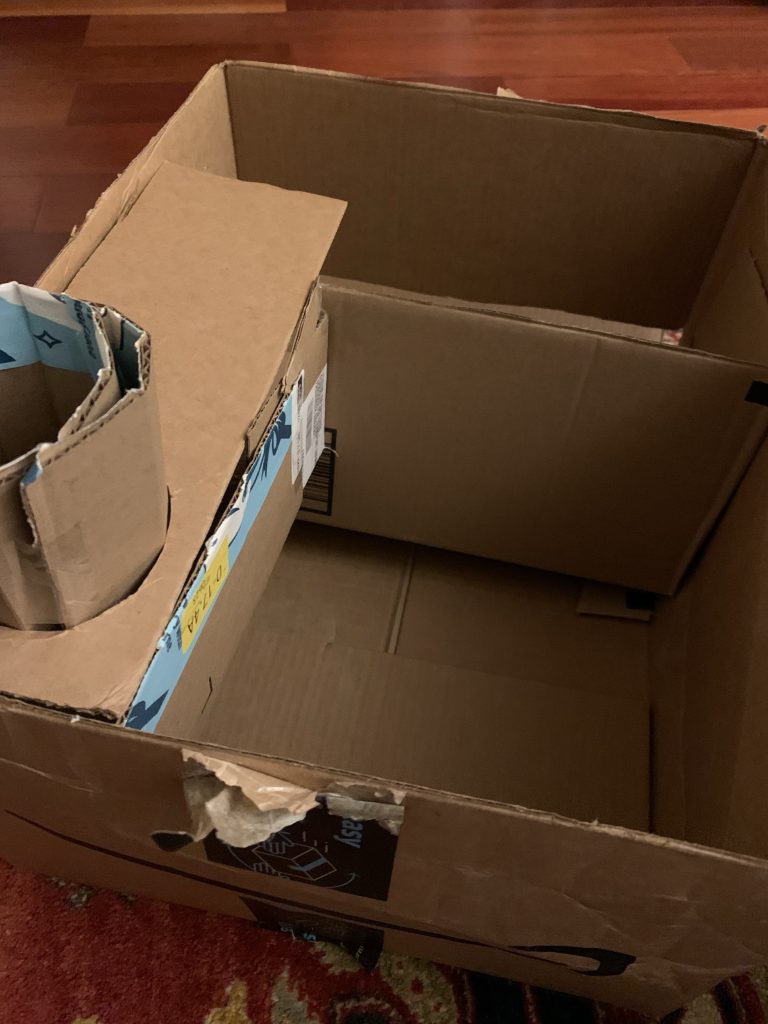 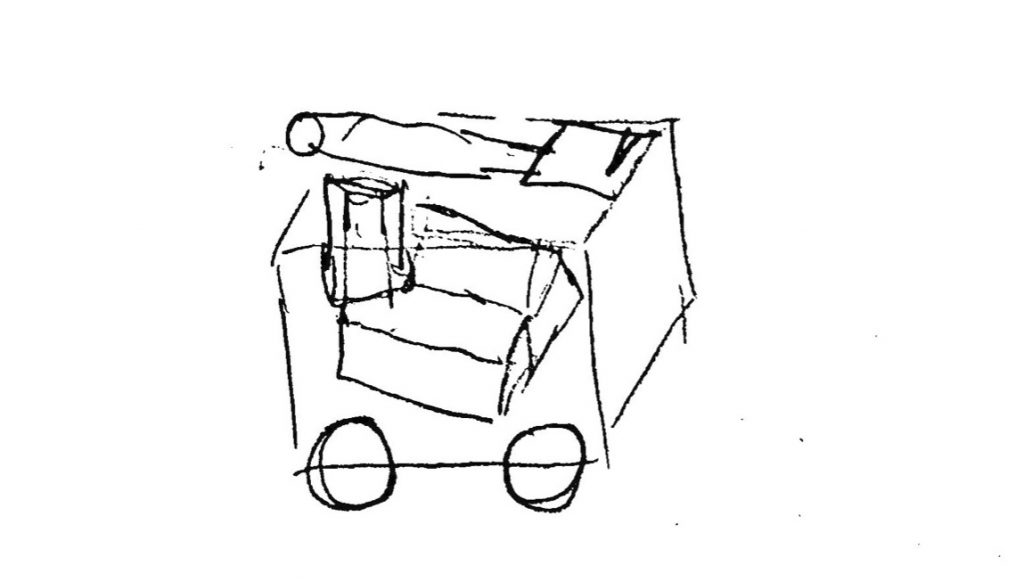 Original sketch to plan out what materials I would need 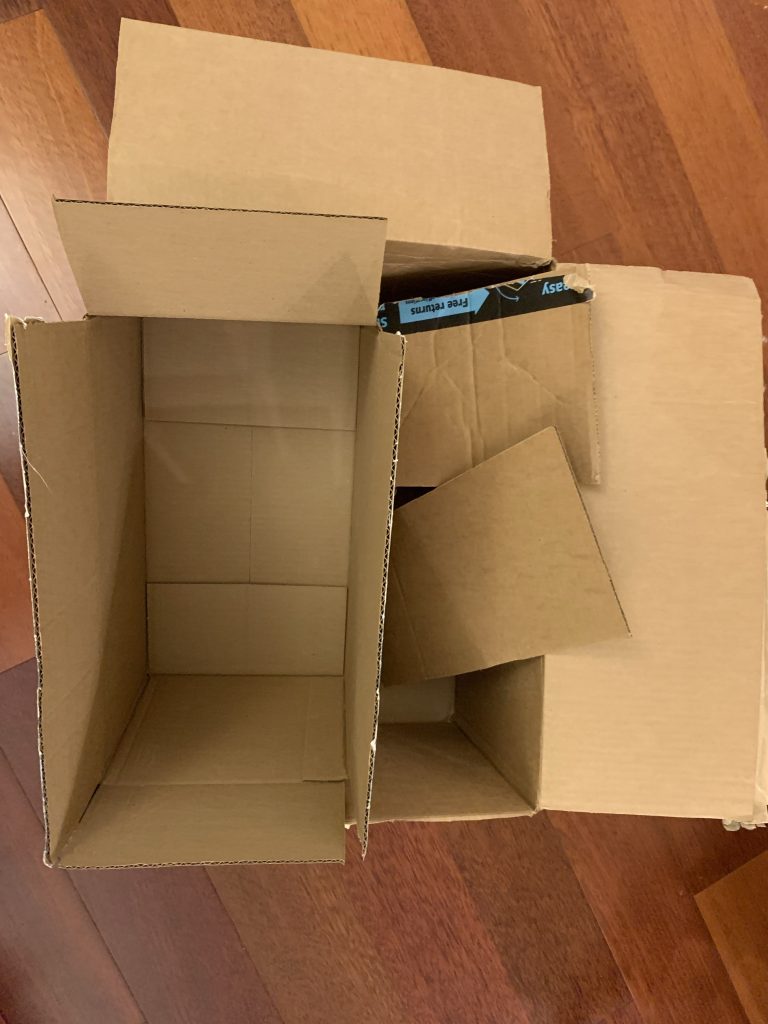 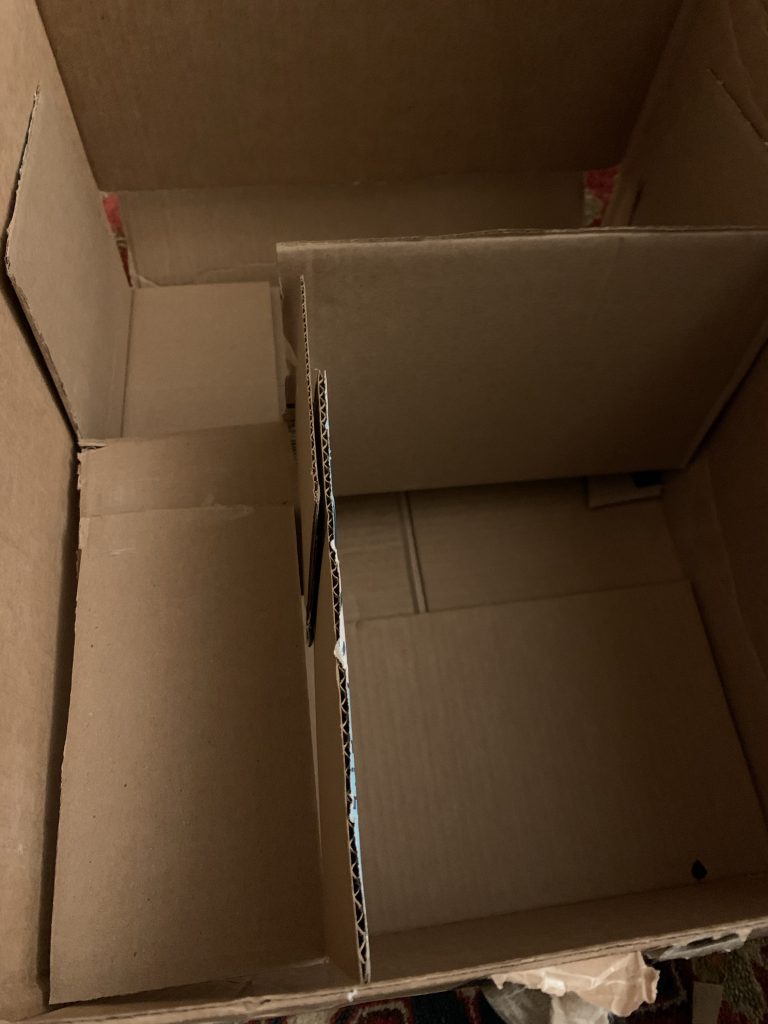 Process of putting together inside of car, too much space underneath the tank makes the robot bulky.

The process of explaining the very specialized purpose of robot to my sister allowed us to brainstorm more about the project overall. First, she said that the robot was very bulky, yet she wondered if the blender space was big enough. You would have to keep refilling the blender with ingredients which would make the remote control useless. Beth said that she can cover about 9 square feet per blender of moss mixture. This is important feedback; we have to have a large enough blender space so she doesn’t have to keep bringing the robot back to her.

I was concerned about the size and weight of the leaf blower especially, and I was surprised with how much space it would take up. Beth mentioned that it would have to be super strong so that would add to the weight. My sister and I also noticed that the leaf blower might be getting rid of the leaves ineffectively since we weren’t really controlling the direction of the blower. These problems helped us decide on a moss dispenser when Beth told us that we should focus down onto either a leaf blower or a moss dispenser.

My sister and I also discussed how the wheels might have a hard time getting through Beth’s garden’s terrain so we explored a different type of wheel, or at least they would have to be bigger. Beth mentioned that her yard is quite muddy, so she agreed that the wheels have to be durable and powerful. We will be designing the wheels with this in mind.

This prototype was designed to answer this question: “How will all the pieces go together, is it feasible?”

This is a 3-D model of our idea made in Fusion 360. It includes a model of the leaf blower, blender, tank (the tank is inside the car though) and the car itself. 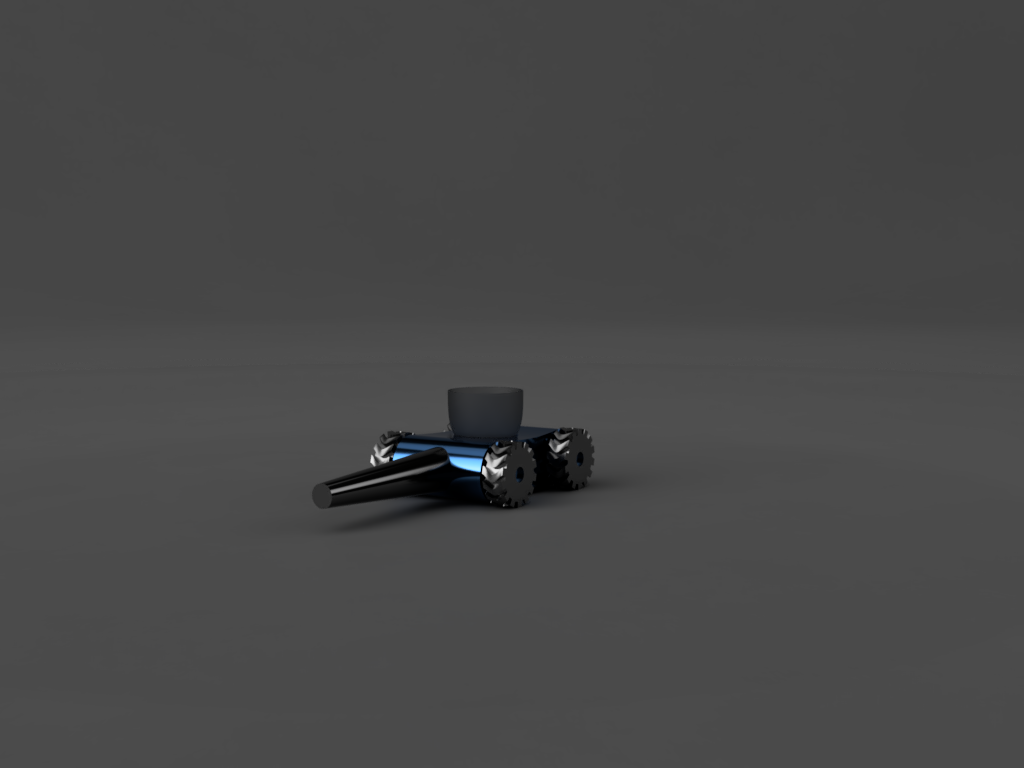 full view of the 3D model 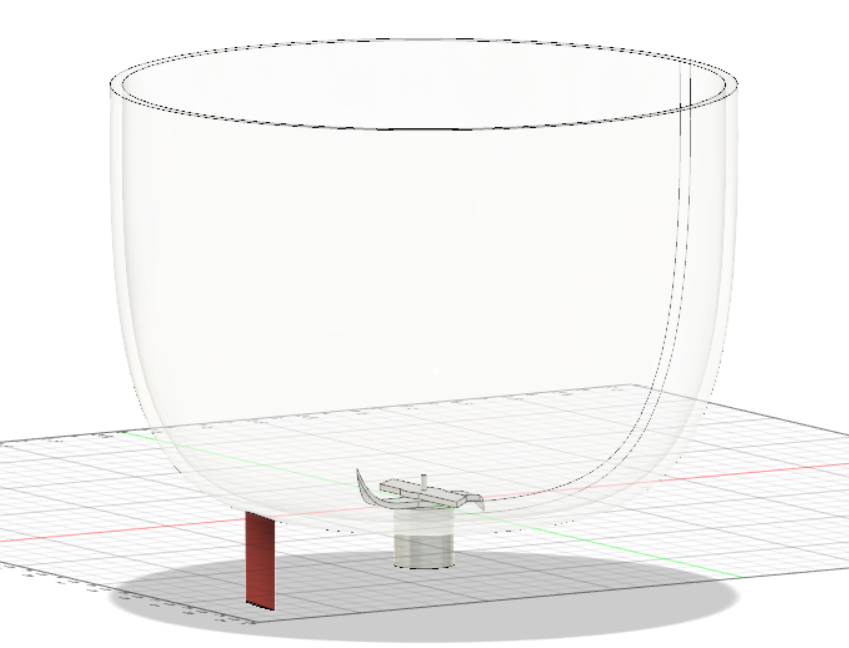 close up of the blender 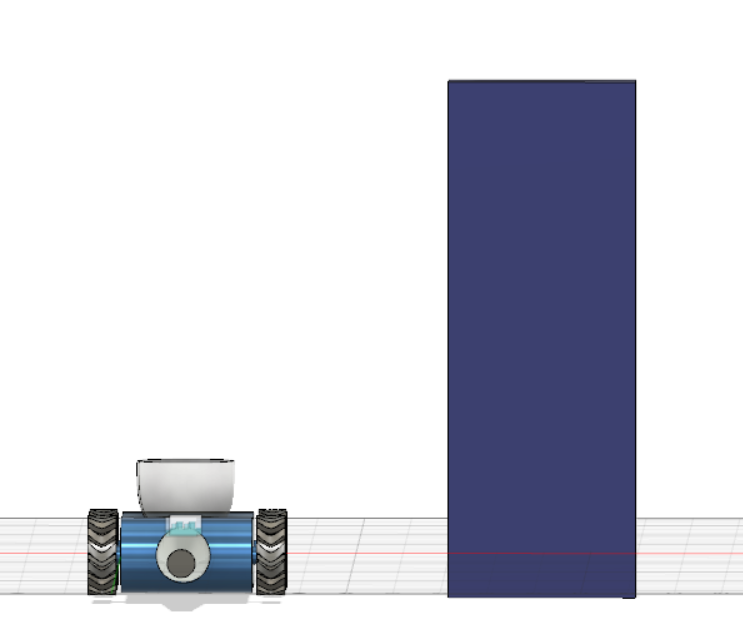 model next to 5’5 person 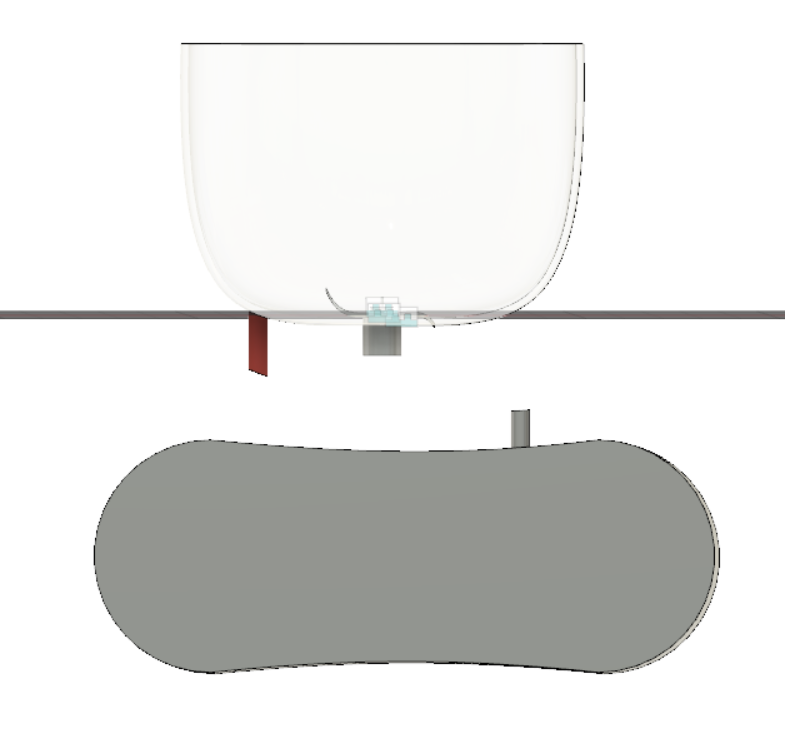 how the blender and tank would be connected by hose 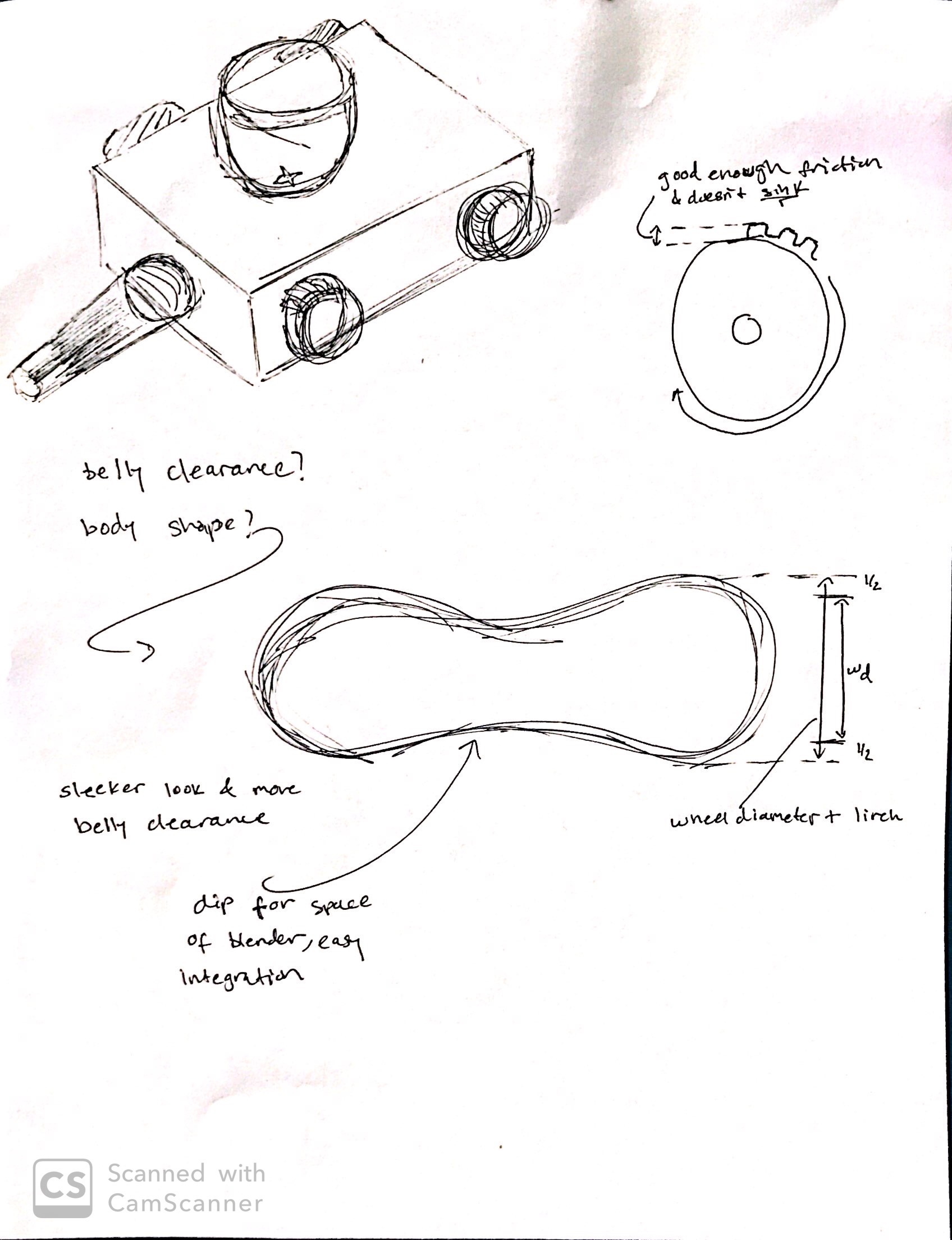 original thoughts on the body of the car 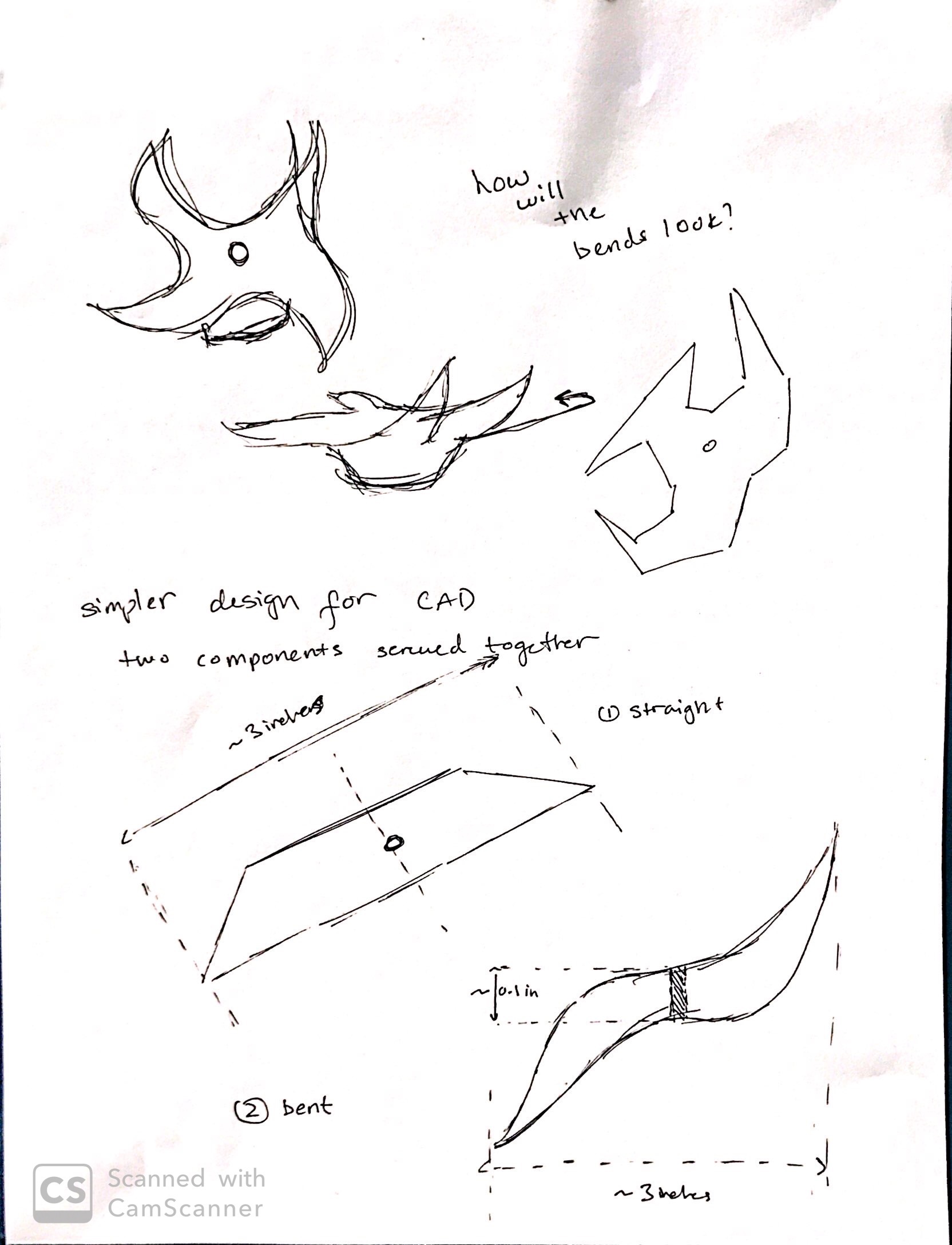 thoughts of the blades for the blender

I asked my mom to look over the prototype and she asked me these questions, ones I hadn’t thought about.

Thankfully, the design already has a built in washing method. It can simply “blend” water and let it run out through the tank. I didn’t have an answer to her next question because I’m still not sure which motors we are using and how much weight it will be carrying at maximum capacity. Knowing these two though I can definitely do those calculations to figure out if the battery is enough. It would be interesting to see some indication that the car is on low battery, but I couldn’t think about an effective solution to that. Similarly, the suggestion for an indicator that the tank is empty would be a nice touch, but I also couldn’t think about a solution to that. We are going to integrate a charger when we figure out what battery we will need.

I will be trying to integrate indicators for low battery and a low fuel tank. I think those features a very nice for something like a remote controlled car. If its too far away for you to see those situations visually, those indicators solve that problem. All of the feedback was very helpful and none of it will be ignored.

During the prototyping process, I did encounter surprises. First and foremost, I usually model in Solidworks. I was surprised to see that Fusion 360 is actually more different than I expected and had to learn a couple things before I could start modeling. 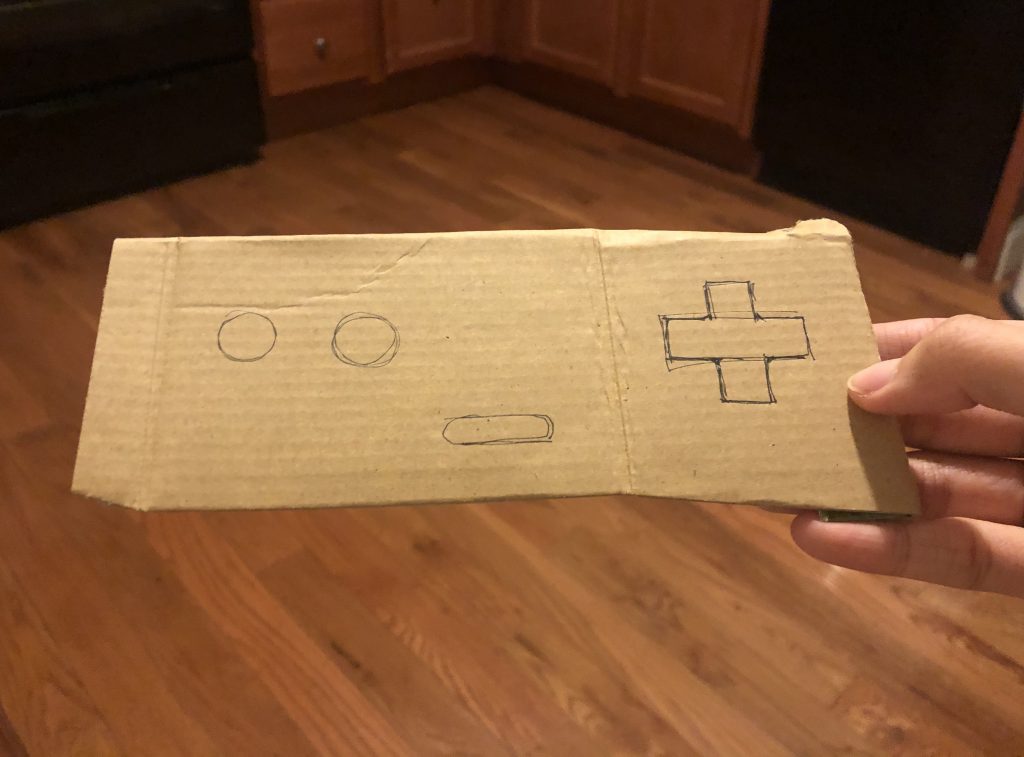 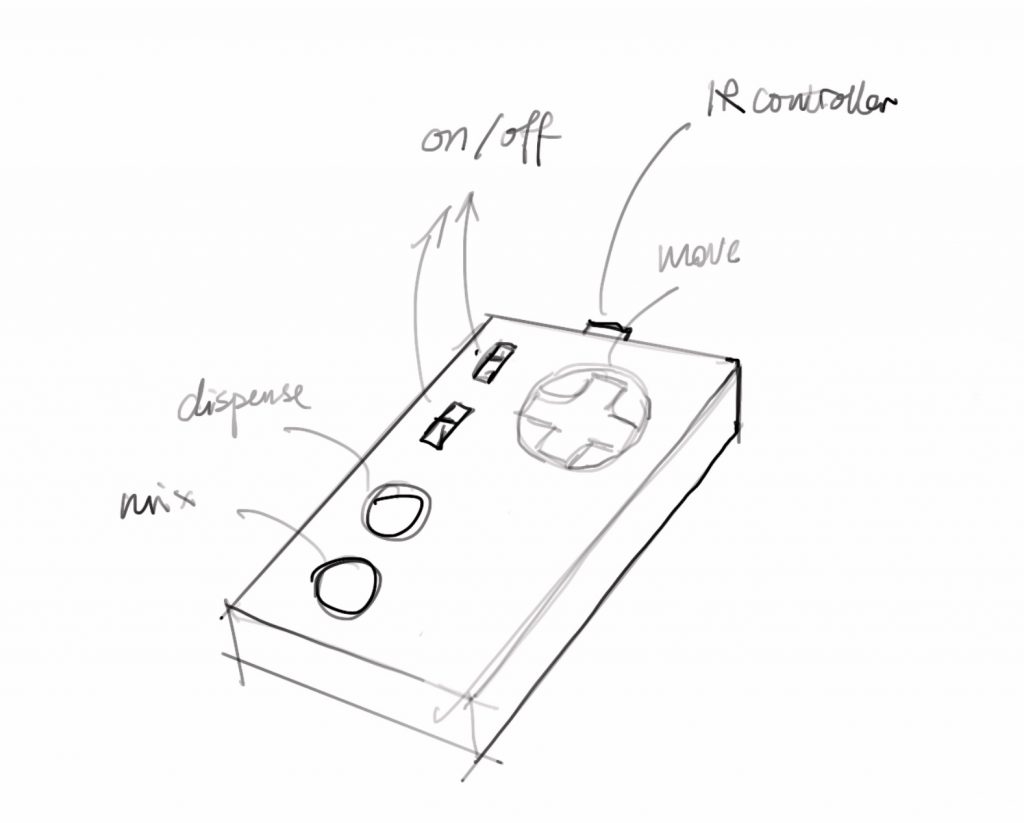 How ir sensor and controller work in tinkercad 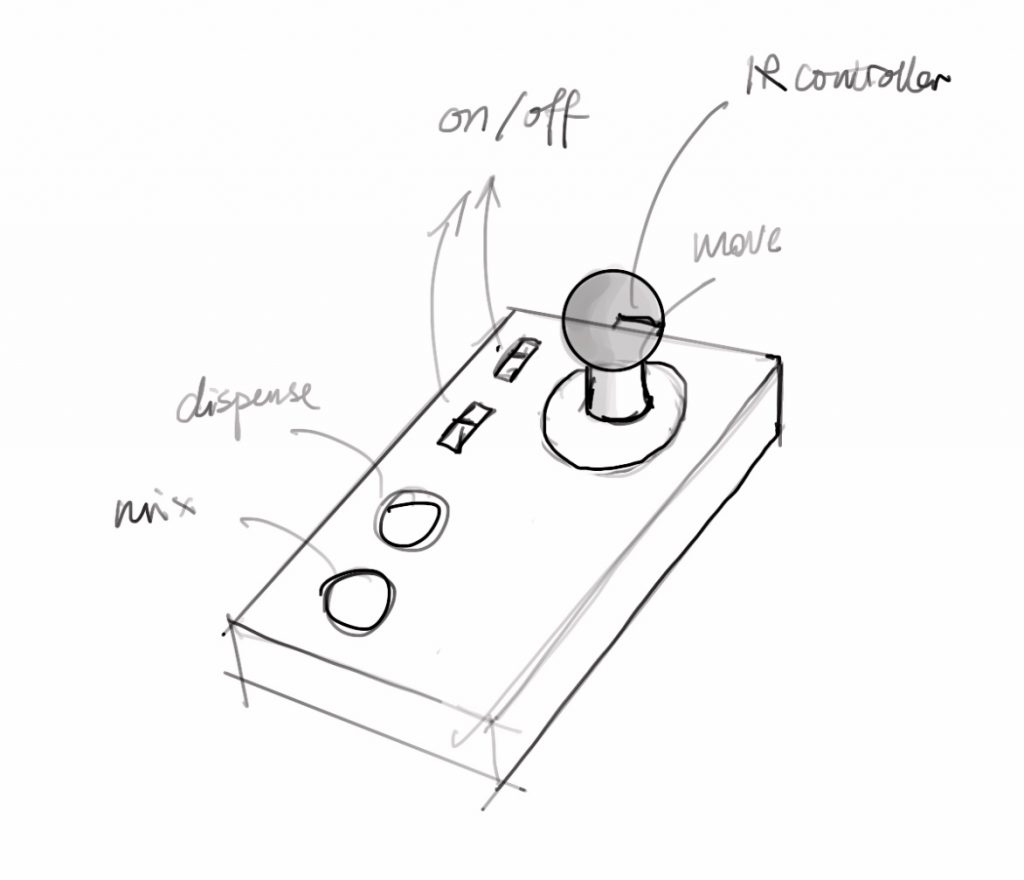 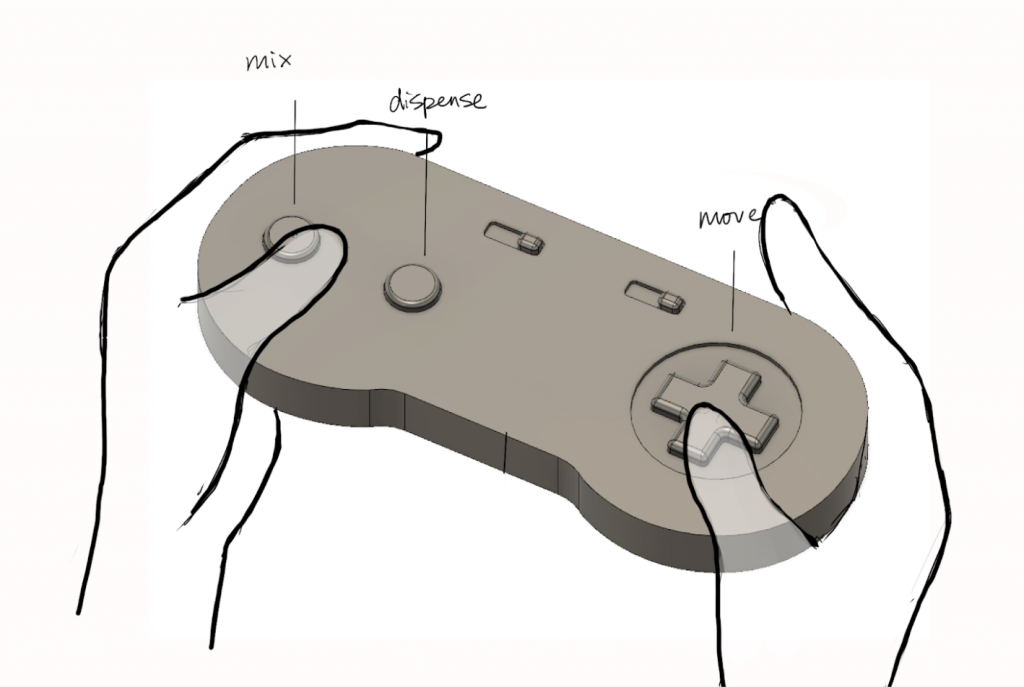 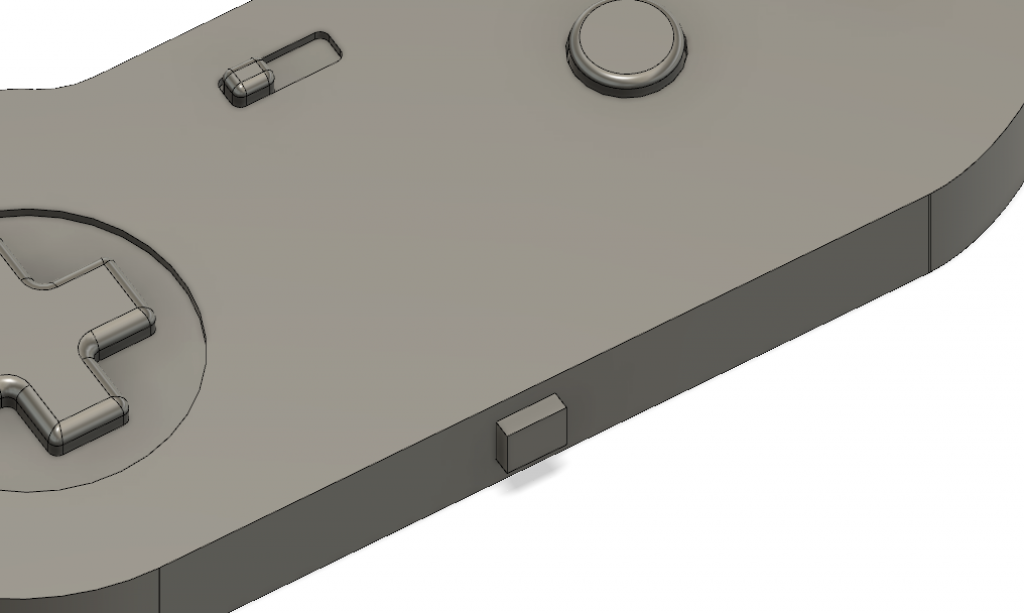 render – where does the ir sensor goes 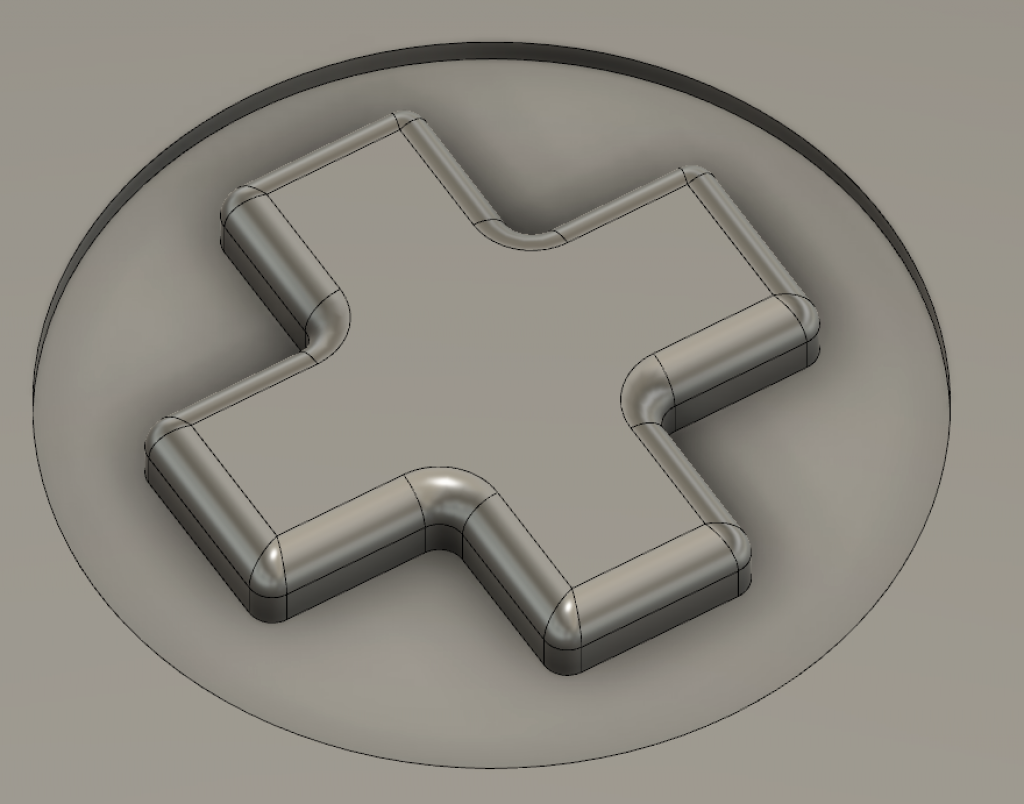 This controller was designed to control both the robot and the blender. It is going to use IR sensor to communicate with the robot and use mix, dispense, and move around the robot as user press the buttons.

I made three initial controller sketches including the final one. Since I am fairly new to 3D modeling Fusion 360, I ended up with the idea of referring to nintendo controller since it is not only simple to reference to but also ergonomic for the user to use. Then together as a group we figure out what are the functions that we need on the controller.

I showed this controller design to my friend and immediately got the feedback that the design is overcomplicated, which was also reflected in Beth’s feedback. Since Beth is going to be working in the woods and possibly need to carry/move other stuff, having a controller that takes up both hand just seems impractical. So for the next iteration, I will be going back to my original prototype of one hand-controller and make sure the placement of the buttons are comfortable and easy to use.

Another feedback I got from my friend was that she preferred the use of joystick in one of my initial sketches since there could be more refined control. However, after talking to my teammate, we realize that it would not be practical since the band wheel we are using does not allow moving 45 degree.

We thought the prototyping process was very successful since we got a lot of good feedback from everyone. Our client was very impressed with our prototyping given what we gathered from our initial conversation with her.

Beth had also let us know that it seemed like we should focus on a remote controlled car that either leaf blows or dispenses moss. She mentioned that the leaf blower would have to be quiet so as to not disturb neighbors, yet it would have to be strong enough to blower wet leaves. This seemed like a task that was a little out of scope for the class, so we decided in building the RC moss dispenser.

We discussed having  the moss dispenser in backpack form versus remote controlled but ultimately we chose a remote controlled robot for the final project since it seemed as the complexity of the backpack wasn’t much compared to the RC version.

We discussed on Wednesday evening as a team about the final design, which involved solving various issues on how it would work in real life. One huge problem was figuring out how the dispensing would work. After some time, we found a solution with a hinge and servo motors. 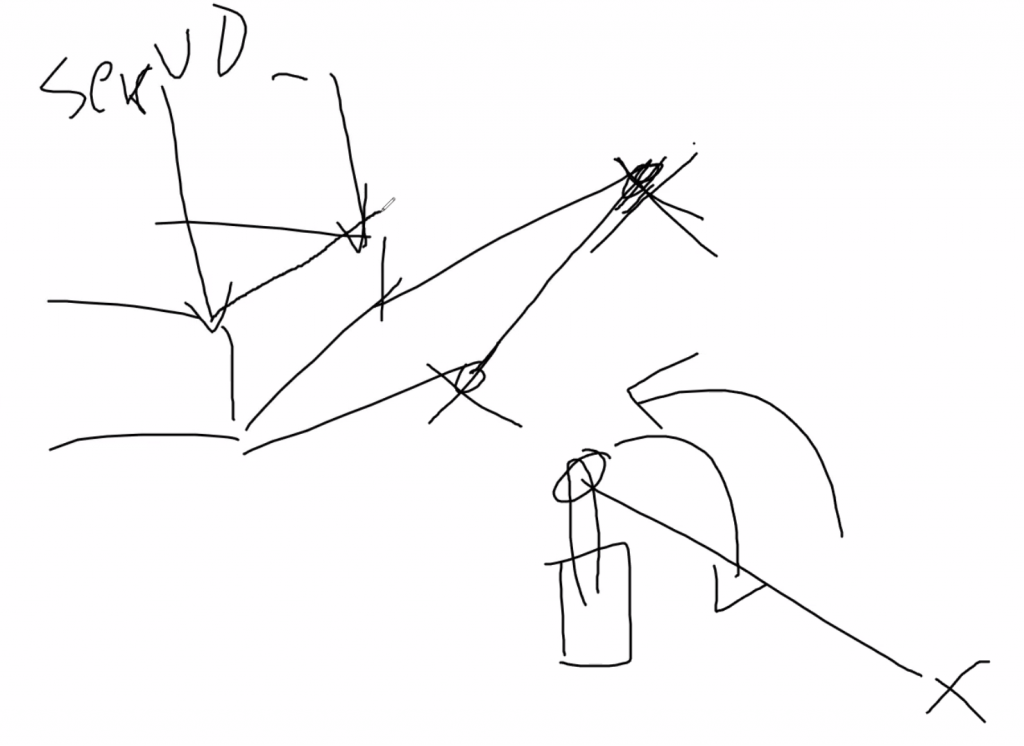 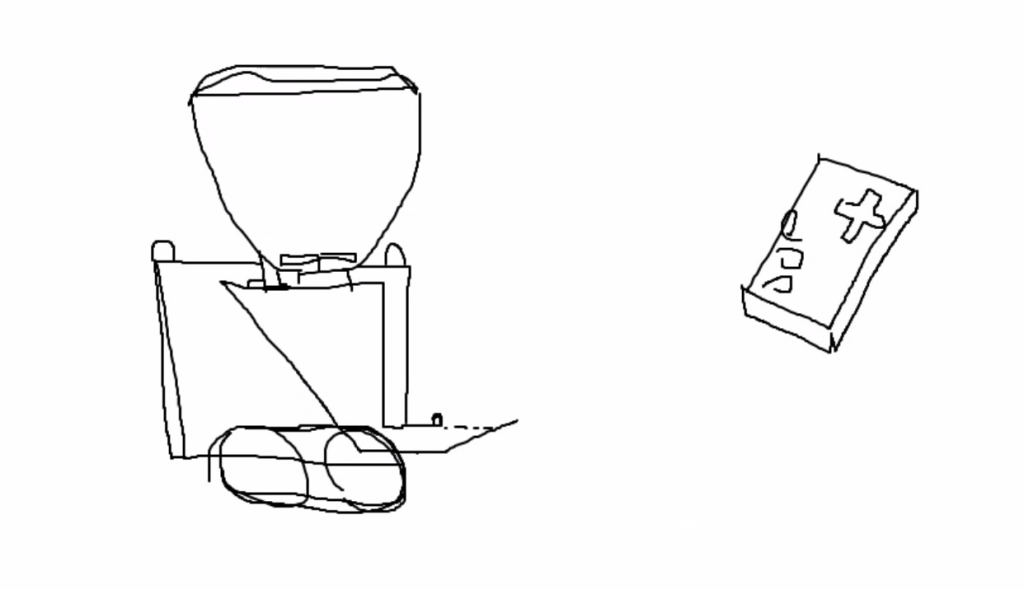 Overall drawing to get on the same page

If we were to ever do this again, we would like to have spent more time initially figuring out how most of this stuff would work in real life.

Overall, we’re really glad we had a prototyping process since we found and solved some very crucial problems and also narrowed down the vision of our final product.